#626 Cuboid stress fracture vs. Peroneus longus tendinitis. How can a runner tell the difference? - DOC

#626 Cuboid stress fracture vs. Peroneus longus tendinitis. How can a runner tell the difference?

How can you tell the difference between a cuboid stress fracture and peroneus longus tendinitis? Well, that’s what we’re talking about today on the Doc On The Run Podcast.

Now, if you are a runner and you’ve had pain on the outside of your ankle or somewhere on the top of your foot, the outside of your foot, somewhere on the outside kind of near the ankle and kind of near the heel, and you’ve been told that you have peroneus longus tendinitis, you might have a cuboid stress fracture. Which one’s worse? Well, I’ll tell you that in terms of really destroying your ability to run, definitely an ignored cuboid stress fracture is worse.

In fact, out of a study of, if I remember right, it was 113 soldiers. There was only one cuboid stress fracture and all the rest of them were other stress fractures in the foot, mostly in the metatarsal bones that we usually think of when we hear, your buddy says, “Oh, I got a stress fracture training for my marathon.” It’s usually one of the metatarsals. The cuboid is very rare by comparison, but it can be really bad when it actually breaks the metatarsals because they’re straight bones. If they crack and break, we can put a little plate and some screws on. And it’s not anywhere in the joint most of the time, so even though it’s cracked and it sounds scary, it’s not really that hard for us to fix as surgeons.

But when you break the cuboid, it’s a totally different ballgame. It’s sandwiched in between the fifth metatarsal, the fourth metatarsal, the cuneiform, the cuboid. I mean, the calcaneus, where it attaches the calcaneocuboid joint. It’s in all of these different connections in a really tight space that’s a real problem. In addition, there’s a groove in the cuboid and the peroneus longus tendon actually runs right around the cuboid, and so you can get irritation of the tendon if it cracks through that area as well. So you do not want to go around with the wrong diagnosis, not getting anywhere if you have that kind of pain. So let’s draw some pictures and talk about the differences between these things.

First thing is when we look at your foot and, of course, we’re talking about this area on the outside of the foot. So you got the heel bone sitting back here. In the front of the heel bone, this part we call the anterior process of the calcaneus, that’s where the cuboid attaches to the heel bone and there’s a little groove in the cuboid. And then there are little surfaces for the two metatarsal bones. The fifth metatarsal, it actually kind of bulges out like that. And then the fourth metatarsal, they both sit up against the cuboid and then they’re in between the metatarsals and the heel bone. Then you’ve got the talus bone that sits on top of there. Tibia sits on top of there. And the fibula, the bone on the outside of your ankle, it sticks out. That lump on the outside is over here.

When you get a cuboid stress fracture, it hurts because you get increased inflammation within the cuboid bone itself. And then if you ignore it and ignore it and ignore it, it can actually break and crack completely. It can happen for lots of different reasons. I put up some other videos that show you why it happens and all that sort of stuff. But what you really need to know is this. The peroneus longus muscle sits way up here behind the fibula. You have two peroneal muscles.

You have the peroneus longus is the one we’re talking about. You have two. You have the peroneus longus and the peroneus brevis. So there’s a long one and a short one. The long one is up higher and has a longer tendon. That’s why it’s called that. Basically it comes down behind the fibula, goes around the back of the fibula, comes down toward your foot, and when it gets to the cuboid, it turns and it goes underneath the cuboid all the way to attach to the base of the fifth metatarsal. 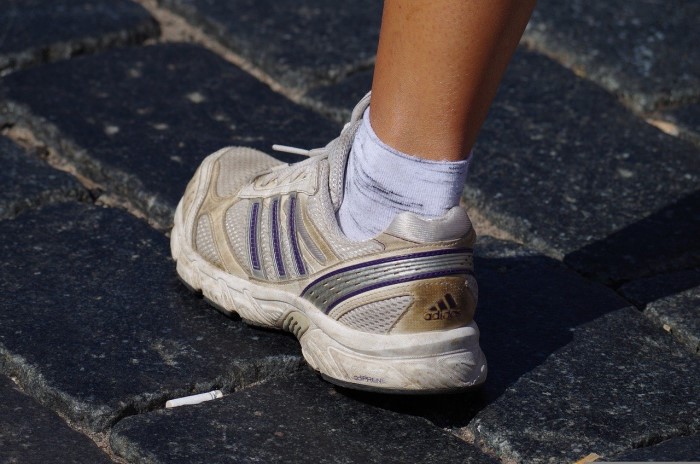 So when you’re sitting in a chair and I want to test the peroneus longus, I actually put my thumb under your first metatarsal and push it up, and I tell you to push your foot down like you’re pushing the gas pedal. And if you can actually pull the metatarsal down, that’s the peroneus longus firing. Now, if you do that and you tell me you have pain on the outside of your foot right where the cuboid bone is, where it’s wrapping around the cuboid, well, I immediately think in most cases, “Oh, you must have peroneus longus tendinitis.”

The other thing is that if your foot is unstable, if you have an unstable flat foot and your foot really collapses easily, well that’s partly because the peroneus longus doesn’t stabilize that joint very well. So if you have a big bunion and you can’t stabilize the first metatarsal or if you have a flat foot that collapses, that can cause this problem with the cuboid because as your foot collapses, this arch is bigger. This arch is smaller. So when your foot collapses, it actually comes over and compresses the cuboid and squeezes it between these bones, and that actually can cause the stress fracture. So if you have a really unstable flat foot, it may seem like you have pain in your peroneus longus when you really have a cuboid stress fracture.

So what can you do to tell the difference? Well, first thing is x-rays. Everybody says, “Can I get some x-rays and tell?” No. If you have a cuboid stress fracture, you don’t have an actual crack in the bone yet. Or even if you have a very subtle crack, we may not even see it on x-rays. So the x-rays are usually negative when people have this issue where we think you might have a cuboid stress fracture or you have peroneus longus tendinitis. An MRI will be way more helpful than x-rays, mainly because the inflammation within the tendon will show up on an MRI, but you will never see that on an x-ray.

Also, if you have a stress reaction, you don’t have any inflammation around the peroneus longus tendon, none. But you do have lots of inflammation within this bone right here. Well then we go, “Okay, you definitely have a stress reaction or a stress fracture happening in the cuboid.” A CT scan can show that inflammation within the cuboid. It doesn’t show the tendons and ligaments as well as an MRI, but it does show the bone detail better. So if you have a crack in the bone, the CT scan is the best way to actually see it.

Now the other thing is that if you’re looking at your foot and I’m, if let’s say I’m sitting in your living room and I’m examining you, or if you call me on a webcam visit because you want me to show you how to do this yourself and you want me to help you figure it out. Well, I listen to your whole story and then one of the things I would do is I would have you take your foot, put the camera on it so I can see it, and I would show you exactly where to push on the surface. Now, if you push on the surface lightly and you find the peroneus longus tendon and you’re gently pushing along the peroneus longus tendon and that hurts, it’s more likely to be peroneus longus tendinitis.

This also is true if the doctor has you fire your peroneus longus tendon by putting their thumb under your big toe joint and telling you push down like you’re pushing on the gas pedal, well, the tendon’s wrapping around the cuboid. And so if it’s inflamed and that tendon’s squeezing it and pulling up against it, it can mislead the doctor to thinking that you’ve got peroneus longus tendinitis, because they just tested that muscle and that tendon and it caused pain. But it’s causing pain because it’s squeezing that inflamed cuboid bone.

What do you do if you can’t figure this out yourself? Well, you can go see your doctor, obviously. You can watch some of these other videos to see if you can tell what it is on your own. But if you call me, part of what I’m going to do is I’m going to ask you all the stuff I’m explaining to you. Ask you about your history, ask you about what happened, how did it start, what does it feel like, if you had any bruising, if you had any swelling, how much has it changed over the last few days?

If you really need x-rays or an MRI or a CT scan, if you’re in California or Texas, well I would order it for you. If you’re in some state where I don’t do webcam visits because of the laws in those states that prohibit doctors from doing it when they’re out of state, well, you’d have to see somebody who does it in that state. But there are doctors everywhere that can help you.

You just don’t want to ignore this thing and run until the stress fracture gets worse and cracks. So make sure you understand the differences between these things. Try to figure it out on your own, and if you can’t figure it out on your own, then go see somebody or get a webcam visit with somebody that can help you. Now, if you liked this episode, please like it. Please share it. Please subscribe and I’ll see you in the next training.