#627 Cuboid stress fracture vs. Subluxed cuboid. How can a runner tell the difference? - DOC

#627 Cuboid stress fracture vs. Subluxed cuboid. How can a runner tell the difference?

What’s the difference between a cuboid stress fracture and a subluxed cuboid, and how can you tell the difference if you’re a runner? Well, that’s what we’re talking about today on the Doc on the Run podcast.

Even though they have a really good blood supply that helps them heal quickly, when you have one that you ignore, that good blood supply works against you. The increased blood flow in the bone, when you have the stress fracture, actually washes out the bone density, decreases the bone density, makes it weaker, and then it can crack more. It can even develop this thing called a nutcracker fracture where your foot basically squeezes and crushes the cuboid. That is not a good thing for lots of reasons that you probably don’t have to really think too imaginatively about to realize how that would be terrible.

The first thing is, is that when you call me and you say, “Well, I think I have a cuboid stress fracture or a subluxed cuboid, I’m not sure which it is,” the first thing I’m going to ask you, “Well, okay, let’s see if your story fits with either of them.” The thing that we do, what we call the history portion of your interview with a doctor, is really simple.

We ask you all kinds of questions like, “What did you do? Did you do anything that would cause a cuboid stress fracture? Did you do anything that might have caused a subluxed cuboid?” A subluxed cuboid means the cuboid’s out of place. Most of the time, it is dropped down. It’s moved a little bit too low, it’s out of position, it’s not sitting right and, because of that, it’s causing a lot of pressure and irritation within the joint and it starts to hurt.

I think drawing some pictures can help here so let’s draw a couple of images. The first thing is, when we look at where the cuboid is in your foot, we’re talking about is, you got the heel bone back here and the front of the heel bone is what we call the anterior process and the talus bone sits on top of your heel bone, your tibia sits on top of that. The cuboid is this irregular shaped bone, has a little groove for the peroneus longus to go through it, and there’s a joint surface for the fifth metatarsal and a joint surface for the fourth metatarsal.

The fifth metatarsal bone, the one that kind of sticks out on the outside of your foot, sits over here, the fourth metatarsal bone sits right there. Again, we’re talking about the heel bone, the cuboid, the fourth and fifth metatarsal bones. Cuboid’s sandwiched in between. A subluxed cuboid is where, if we’re looking at that same joint surface and this is the cuboid, well if the cuboid drops down to where it’s a little bit out of position, let’s say, it’s supposed to be sitting up here like that but it actually drops down a little bit, that’s what we call a subluxed cuboid. Subluxed is not dislocated, meaning it’s not completely out of joint, but it’s sort of partially out of joint. It’s a little bit out of position. 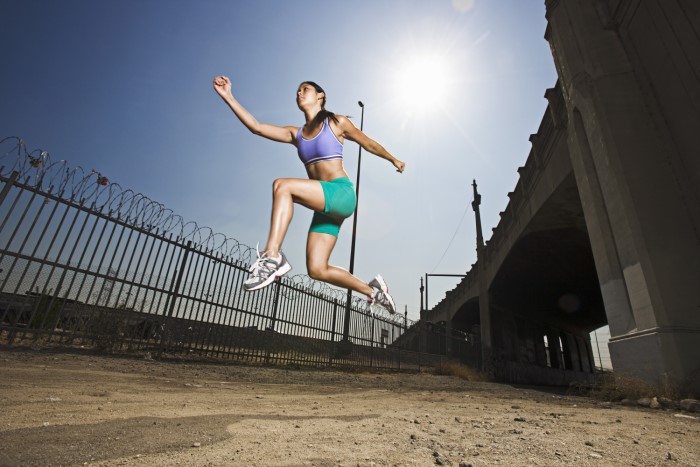 If the cuboid drops down and causes this thing called a subluxed cuboid, it can start to hurt. If you have a subluxed cuboid, that usually happens from trauma, like some kind of injury. And so, if you tell me, “Oh, I know exactly when it started hurting. I was doing box jumps at the gym and it started hurting after that.” Well, I would think that if it’s a really sudden onset thing because of jumping rope, doing box jumps, taking some big misstep, more likely to be a subluxed cuboid than a stress fracture. A stress fracture comes on very gradually, in most cases. The other thing … Or the exception of when you have an ankle sprain.

The other thing is that, believe it or not, this happens in, at least we’re taught in med school, it’s happened by standing on ladders. You’re standing on a ladder, standing on the rung of the ladder, and all this pressure basically causes the cuboid to move. And so, if you’re standing on a ladder and you told me you’ve been painting your house or something like that or cleaning your gutters and you were wearing really flexible, non-supportive shoes while you were doing that, well I’d start thinking maybe it’s more likely that you actually have a subluxed cuboid as opposed to a stress fracture.

A stress fracture, again, is in many ways worse if you don’t diagnose it, you don’t treat it right, but if you do diagnose it right it heals very quickly and you don’t have to do a lot of fancy stuff to get it to heal, so that’s the first thing. The next thing I would say, “Okay, we haven’t tried anything or not.” And so, if you can’t figure out, based on what’s going on, you might be able to try some things that could maybe tell the difference, right? One of those things is a cuboid pad. Number one, what happens when you try a cuboid pad? Now, a cuboid pad is not really complicated.

If we look at the insert in your shoe, if you take the insert out of your running shoe and you look at it, you’ll see a wear place where the ball of the foot is. You’ll see a wear spot for the big toe, the second toe, the third toe, the fourth toe, the fifth toe, et cetera. You’ll see a wear spot here and, if you have high arches, you’ll also see a wear spot where the fifth metatarsal bone, this part, sits right there, so we know your cuboid then has to be right about here. What you do is you put a pad right there that basically pushes upward. If you put a little felt pad, a lump or a dome shaped pad in that area and it pushes up on the cuboid, it actually pushes the subluxed cuboid back into position.

The other thing is that if you are suspected of having this subluxed cuboid where it’s dropped down, there’s an actual procedure we can do called the cuboid whip maneuver and we basically, I won’t show you exactly how to do it because I don’t want you trying it yourself and breaking your cuboid. But, basically, we manipulate your foot, we put our thumbs on the cuboid and we pop your foot and push it back into position. If you see a chiropractor, they’ll probably want to try this on you. Many podiatrists will actually try it as well. If you’ve tried the cuboid whip procedure and it made you way better, like instantly, then it’s almost certainly a subluxed cuboid.

If you tried that and it made no difference at all or it hurt, then it’s probably a cuboid stress fracture. But again, if you’re not sure and you haven’t had x-rays to rule out an actual crack or a fractured cuboid, it’s a bad idea to do this maneuver. You do not want to be popping the cuboid and applying pressure to it if it might be broken. That would be a bad idea. Don’t try this yourself and tell somebody that I told you to do it because I’m not telling you to do that. The other thing is an MRI. An MRI can really help you tell whether or not you’ve got this but, in many cases, an x-ray is enough.

It costs more money and it takes more time to get an MRI. X-rays are cheap and fast. If you called me today and I ordered x-rays for you, you could probably go in and get them today. You could send me the disc, you could send me the files electronically, and then I could review them with you. You can even pull them up on your computer and I could look at them with you. Then you’d be able to tell if the cuboid’s out of position like this or if it’s in the right position. If it’s in the right position, we know that it’s not subluxed, it might have a stress fracture. These are the ways you can tell the difference. Sometimes it’s about your story, sometimes it’s about imaging. Most people seem to think it’s about imaging but a lot of times it’s about your story and the things you tried.

What really fits the most with these two different diagnoses? Is it cuboid stress fracture or a subluxed cuboid? If you can’t figure it out on your own, you can always call your doctor, make an appointment. You can go see somebody. You can schedule a webcam visit with somebody like me that does online consultations, but make sure that you know which one it is so you can treat it appropriately because, again, they are treated differently, some with manipulation, sometimes with pads, but sometimes with just staying off of it just for a short period of time so it’ll actually calm down and heal.

That points out one other thing. If you have a subluxed cuboid and you stop running, that’s not going to make it that much better because it’s still out of position and it’s still going to bother you every time you’re weightbearing, you’re standing, you’re walking, whatever. Whereas if you have a cuboid stress fracture, if you decrease your activity significantly and it suddenly starts to improve significantly, well then it’s probably a cuboid stress fracture and not a subluxed cuboid because you haven’t done anything to put it back in position.