#625 Cuboid stress fracture vs. truly fractured cuboid bone. How can a runner tell the difference? - DOC

#625 Cuboid stress fracture vs. truly fractured cuboid bone. How can a runner tell the difference?

What’s the difference between a cuboid stress fracture and a truly fractured cuboid bone? Well, that’s what we’re talking about today on The Doc on the Run Podcast.

If you’re a runner and you’ve been told that you have a cuboid stress fracture, you might be worried that there’s an actual crack in the bone, and that’s what I think of when I think of a truly fractured cuboid bone and there is a huge difference.

The cuboid bone is a little bit of an irregular bone. It’s small, but it sits right in between your heel bone and the fourth and fifth metatarsal bones and when you roll your ankle and your foot rolls under you, you can compress it and crack it. If you actually do a whole bunch of box jumps or jumping rope, or you’re running really fast down a trail, you’re doing something where you actually apply a lot of stress to the cuboid bone.

It can become a stress fracture or even a crack in the bone. Usually it’s trauma when you break it. But if you get a stress fracture and you ignore it, what happens is the increased blood flow within the cuboid bone actually washes out the bone density and it starts to get weaker, and then it can actually crack after that. So unfortunately, this happens, even though cuboid bone fractures are rare, it does happen where somebody gets misdiagnosed with something like an ankle sprain or a foot sprain or a tendon or ligament strain, and they don’t really think it’s a big deal. So they keep running on it, they keep training, and then eventually it does crack, and when it cracks, bad things can happen for several reasons.

So let’s talk about that. The first thing is maybe helpful to draw some pictures here to illustrate more about what the cuboid is and where it is and how these things apply. So we look at your foot and you’ve got the heel bone sitting back here. It’s the front of the heel bone that we’re most concerned with when you get a cuboid stress fracture. So the cuboid bone sits in here, There’s a little groove in it where the peroneus longus tendon goes through. And then the fifth metatarsal bone sits here and the fourth metatarsal bone sits there. And so they basically connect with it and compress on it.

Now again, the peroneus longus tendon, without going into a whole lot of detail, the peroneus longus comes down, curves around the cuboid and then goes across the bottom of your foot underneath there to attach to the base of the fifth metatarsal bone. But what we’re talking about is when you get a cuboid stress fracture. So when you get one, first of all, the cuboid bone starts to get inflamed, it gets irritated, it has extra fluid in it, and blood flow increases within the cuboid, and then it can get weaker.

When you have a crack in the bone, a true fracture, you usually have a lot of bruising. So if you have bruising on the outside of your foot, so again, if we’re looking at your foot and you look down at it where you’re going to see bruising, if you have a cuboid stress fracture, this is your leg coming up. If you think about it, well, that bump that you see on the outside of the foot here, that’s your fifth metatarsal bone. So when you look at the foot on the outside of it, you’ll see that bump sticking out and that bump is the fifth metatarsal. So the cuboid is right behind that. So when you get a bruise, it’s usually all around this area. 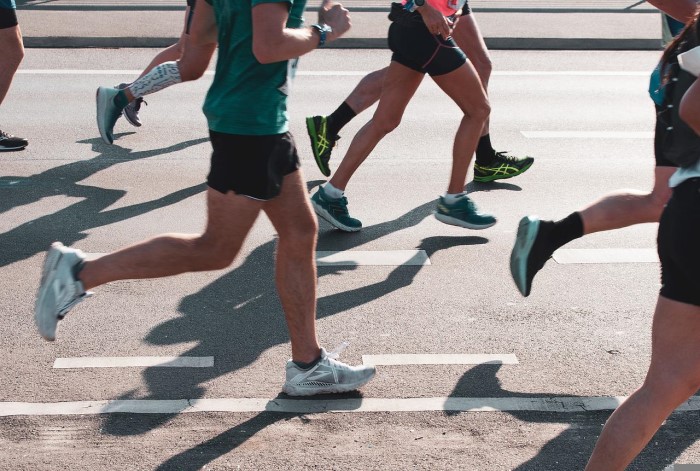 Then you see that discoloration that we think of is a bruise. So first thing is bruising, second thing is swelling. So if you have swelling on the outside of the foot around that area, just in front of your ankle, it may seem like your ankle is swollen, but it’s not really your ankle. It hurts more when you press on your foot. That’s more of a sign of a cuboid stress fracture or an actual fracture. The more swelling, the more I start to think of real fracture, not just stress and strain within the bone itself.

Now, having said that. Let’s talk about the grading scale for these things because this may make you even more confused, believe it or not. A grade one stress fracture. Let’s just put FX for fracture. You have all these different grades of fractures that doctors sometimes use, particularly radiologists. So you might get a radiology report that makes you more confused than you were before you even got it. But when we think about these stress fractures, there’s several differences. A grade one stress fracture is where you actually have no crack, no crack at all, and you have no pain. So what does that mean? Well, the unfortunate thing is if you have no crack and you have no pain, it is not an injury.

But if you get an MRI, something funny might show up. And if something shows up with inflammation within the bone and you’re getting the MRI because you think you had another injury like a plantar plate sprain or something, that is not a stress fracture. Unfortunately, the grading scale that we use actually defines it as a grade one stress fracture. But there’s no crack, there’s no pain. It’s not actually pathologic, it’s not an actual injury. It’s something that happens in response to training. Just like how your arms get sore if you lift weights doing biceps curls, that’s not an injury. A grade two stress fracture really is, that’s what I call a stress reaction. A stress reaction is pathologic. It’s where you’re getting increased inflammation within the bone. There is no crack again, no crack, but you do have pain. And the pain is an indicator that something’s wrong.

It’s in the wrong position, It’s not where it’s supposed to be. So most of the time when you get a cuboid stress fracture, it’s just inflammation within the bone. But if you keep running on it, you keep irritating, you keep compressing it, you keep squeezing it with the peroneus longus tendon trying to stabilize your foot. You’re running on a slope, making your foot flatten out. Well then that’s different. And if you continue to stress it and strain it, the increased blood flow decreases the bone density and then it can actually crack. So you may wind up with an actual crack in the cuboid.

If you ignore that because as soon as you crack it gets significantly weaker because it’s in two pieces. So it doesn’t have the stability of the outer shell holding it in place. If you continue to run on it can crush it, which is this thing called a nutcracker fracture. Nutcracker fractures of the cuboid most often happen, they crush it where you fall off a ladder and really crush it between these two bones, pushing both that way and that way at the same time and then basically the heel bone and the metatarsals together just crush the cuboid.

If you’re running in your training and you’re doing box jumps, or you’re running on steep hills or something and you have a cuboid stress fracture, you actually, all it takes is one misstep where you hit it just wrong, pronate just a little too much at the same time. You’re landing from running steep downhill, running fast and you can break it.

So that’s why you really want to understand the difference between these things. So the big difference is, or the amount of pain, the amount of swelling, the amount of bruising you have. But there is a way you can tell. Now if we poke on it and press on it and all that, and you can’t always tell the difference just on a physical exam of somebody like me or your doctor pushing on it. But we can get a pretty good idea. But you really can tell with imaging, So X-rays do not show the early forms of this. They don’t show stress responses, which is a grade one stress fracture. It doesn’t show stress reactions, which is a grade two stress fracture. And sometimes because the line is so faint, it doesn’t even show up on the grade three ones where you actually do have a real crack.

If you have a really bad one where it’s displaced, it will show up on the X-ray in most cases. But sometimes it’s very subtle. An MRI is much better. An MRI shows inflammation within the bone in all of the phases of injury to the bone, and it will sometimes show a crack. A CT scan shows really good detail on bone. If I talked to you over a webcam visit and I thought, you probably have a crack in the bone based on what you described, You have a lot of bruising, you have a lot of swelling, you have a lot of pain, something like that. I would probably order some X-rays to see what it looks like. But then I would probably want you to get a CT scan just to confirm, because you do not want to have one of those cracks that gets bigger and extends into the joint, that can really destroy your chances of running.

If you need help, what should you do? Well, number one, go see a doctor. If you can’t figure this out on your own, talk to a doctor, either make an appointment with your physician, see a local sports medicine specialist, or make an online appointment with somebody who does webcam consultations, who can talk you through this and help you figure it out. If you’re in California or Texas, I could order your X-rays or your MRI or your CT if you need, and then show them to you online over webcam screen share. But you can get help in lots of ways, but don’t ignore it.

Again, if you have a cuboid stress fracture and you think it’s a minor foot sprain, but you just keep ignoring it could turn into a real crack and a real problem that could interfere with your running forever. You don’t want to do that. So if you like this episode, please like it, please share it, and I’ll see you in the next training.