I was just on a call with somebody, on a webcam call, who had had a second metatarsal stress reaction, which is basically like a mild stress fracture and that had actually been getting better but then when she went for her first run, she had a different pain, and that pain was on the outside of the foot. 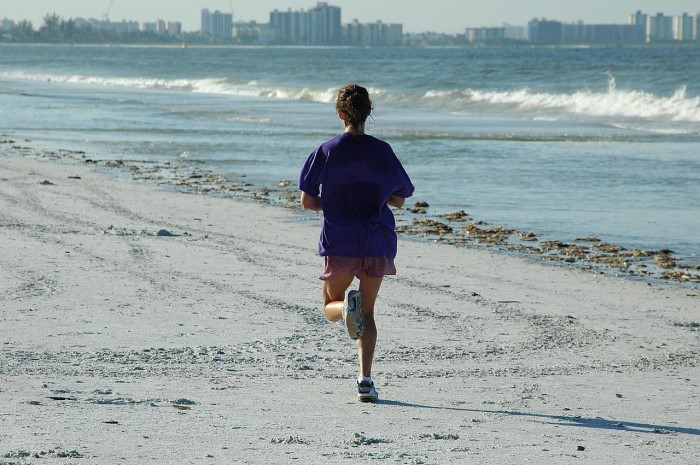 What we’re talking about in this case is this is someone who had had a stress reaction where this bone’s inflamed, the second metatarsal. And then when she went for her first run after she was getting better, she started to have pain over here. Well, how can that happen? Is it contagious? Did it spread from one to another? No. But we’re going to talk about the way that does happen.

If we look at your foot, to make it simple, in cross section where this is your leg coming down and this is your foot, and we’re looking in cross section say through here. You have your first metatarsal bone, your second, your third, your fourth, and the fifth metatarsal bones and so let’s say you have a stress reaction here. Well, your brain knows that this thing is irritated and aggravated and when you’re walking on it, there’s pressure under it. So the way to get the pressure off of that bone is to tilt your foot.

If you then tilt your foot in this direction so that the ground, instead of being right under your foot is actually angled and you’re supinating your foot to take the stress off of there and you get that second metatarsal way up in the air so that there’s no pressure on it, because you’re holding it up away from the ground. Well, what does that do? It puts a ton of pressure on the outside of the foot.

Well, how do you know that? Well, one of the ways you can tell when you’re running is if you’re doing that, a lot of times the simplest way to do it is to tilt your foot inward and so if you look down at your feet, instead of your feet being perfectly straight, one of them might be slightly tilted inward. And that would be a sign that you’re supinating and compensating without even thinking about it. Unconsciously, tilting the injured second metatarsal up away from the ground.

If you found this useful, please like it and share, subscribe and then, if you haven’t seen it yet, you might enjoy the Metatarsal Stress Fracture Masterclass that I put together for you. You can get it by going to docontherun.com/StressFractureMasterclass/, this is a deep dive where I go into all this stuff you really need to think about if you’re a runner with a metatarsal stress fracture. So go check it out, sign up, it’s free, and I’ll see you in the training.