#481 3 signs of a limb length discrepancy in runners - DOC

#481 3 signs of a limb length discrepancy in runners

Today on the Doc On The Run podcast, we’re talking about three signs of limb length discrepancies in runners.

Now, this episode actually comes from a telemedicine visit second opinion that I was doing for someone over webcam, who was a triathlete and a runner, and he was having pain as he ramped up his mileage. And it turns out he had what we call a limb length discrepancy, where you actually have one leg that is a little bit shorter than the other, and it doesn’t have to be a lot.

This is something we see a lot in runners who are starting to get problems as they ramp up their mileage. Now, when you have a limb that is longer, like one leg is a little bit longer than the other, you compensate or adjust for that problem. You may not think that this is really significant or that you have to have some huge difference, but it’s not really true.

If you run on the far right side of the road or the far left side of the road, you’ll wind up running on a slope that actually pronates one foot and supinates the other foot, tilting them in opposite directions, and you can actually get problems from both of that form of tilting. You want to run on flat surfaces or alternating surfaces, and not just on one slope like a road or a sidewalk in the same direction for 26 miles. 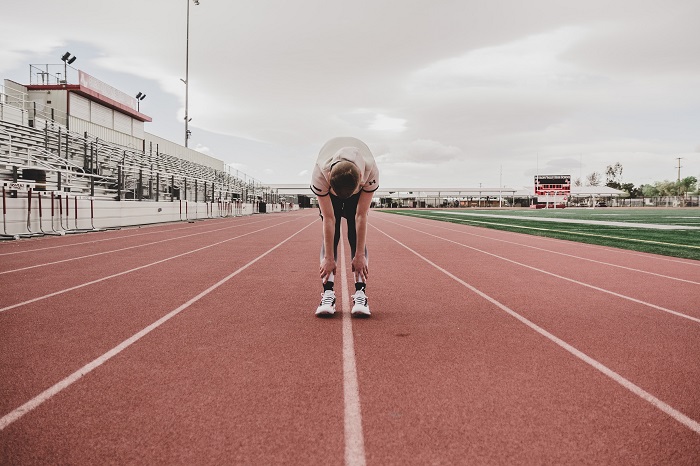 The first one is that when you walk, one side of your shoulders and your arm is actually tilted downward toward one side, and it’s usually tilted downward toward the longer leg. And if you think about that, why would that be? Well, if you stand on a brick, for example, on your left foot, and your right foot is on the ground, well, when you’re standing there, if you don’t lean toward the brick, you’re actually going to be leaning the other direction because the brick is lifting you up and you’ll fall over. When you have one leg that’s longer, you actually lean toward the longer side to prevent you from actually falling over.

When we watch people walk doing a biomechanical exam, when somebody does have a history of running injuries, that’s one of the first things that we as podiatrists look for. We look for a shoulder tilt, one arm hanging down lower than the other that might suggest you’re leaning toward a longer leg. If you have footage of you walking or running, many times you can spot that yourselves.

The second thing is when you look at someone who’s walking and running from the side view as they walk past you, if you have a significant limb length discrepancy where one leg is longer than the other, it actually has more mass. Since it technically weighs more than the other leg by a small amount, you actually swing one of your arms in a longer distance than you swing the other arm to make up for that difference in leg swing. That’s another thing to look for, is just a difference or asymmetry in how far one arm swings as compared to the other arm as you walk.

I saw one woman, in fact, who had problems like Achilles tendinitis, peroneal tendonitis, stress fractures, all kinds of different injuries almost every year for decades, and she had never actually found out that she had a significant limb length discrepancy. And then, once we identified that by actually giving her the appropriate amount of lift to actually compensate or adjust for that limb length discrepancy, her problems were solved completely and she hadn’t had problems in years now.

If you have any of these things, like recurring injuries on one side, looking at some footage of yourself if you record yourself with your phone, just walking toward you, walking past, and you can see that something looks off, then it might suggest you have a limb length discrepancy and then you could get it checked out to make sure that it doesn’t turn into a series of recurring injuries.

Those are really the three most common things I see in runners that suggest a limb length discrepancy, where one leg is just a little bit longer or shorter than the other.