#482 The best and worst way to stop using crutches - DOC

#482 The best and worst way to stop using crutches

Today on the Doc On The Run Podcast, we’re talking about the best and worst ways to stop crutches if you’re an injured runner.

If you get a severe running injury, whether it’s a fracture, like a stress fracture that you continue to run on, or a bad Achilles tendon injury or a bad ankle sprain, sometimes doctors will give you crutches to kind of speed up the process of recovery.

When you are a runner and you have any running injury, you are in a race against time. So all things will eventually heal, but if you take a long time to heal, you’re going to lose a whole lot of running fitness and then it’s going to be very difficult for you to actually achieve your running goals after you fully recover. So the name of the game is making sure that you compress that healing time as fast as possible, and then maintain your running fitness while you’re actually recovering.

Crutches can actually help that a lot. But if a doctor gives you crutches because you’ve had surgery or a severe injury and use them for a few weeks, then you start to get rapidly de-conditioned. And there is a right way and a wrong way to get off of crutches. 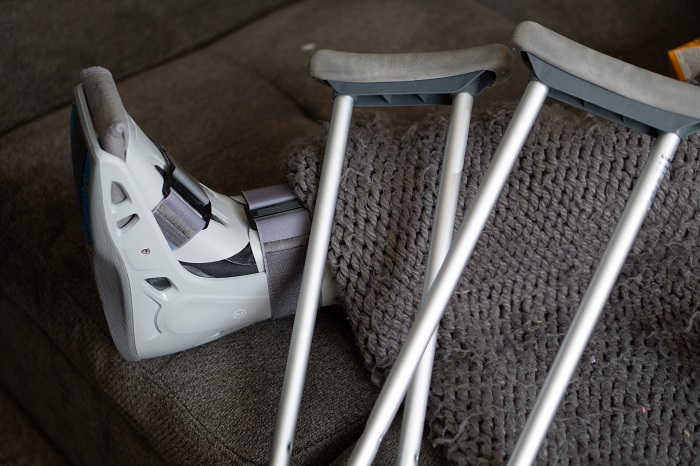 I will have to say that what I think is the worst way to get off of crutches is what many doctors still do today and in fact what most doctors did with me after I had knee surgery a couple of different times. What they do is they basically say, “Okay, you’ve been using them for weeks. It looks like you’re healed. Just stop using the crutches and let pain be your guide.”

Now, when we’re talking about athletes, that’s a terrible strategy because I really think when I go to the gym, if it isn’t painful, it’s a waste of time. And when you’re in training, you’re doing speed work, if it doesn’t hurt, it seems like you’re not really pushing yourself as much as you could. But that’s a problem for runners because we as endurance athletes actually learn to ignore pain, we’re habituated to tuning out discomfort and that discomfort or the pain that you’re supposed to recognize as something to slow you down, you’re actually a little bit sort of desensitized to it.

So if we just take away the crutches, you have basically this period when it’s your highest risk moment of re-injury. You’re weak, you’re unstable, you’re uncoordinated, your neuromuscular connections are all out of whack. And so when you start walking, you actually can wobble and stumble and lose your balance and actually load that injured piece of tissue in a way that causes a setback or a re-injury. That’s the last thing you want.

Most of the time with runners, I don’t do that at all, I actually have a way that I transition them off of the crutches, where you do a couple of days with a little bit of pressure and then a little bit more pressure and so on over a very specific graduated routine so that we don’t suddenly load you.

In addition to that, instead of just letting you sit around, do nothing and get weaker and stiffer the whole time you’re recovering, I actually give you things to do that will maintain your running fitness and keep some of that flexibility and stability so that you don’t really put yourself at high risk of re-injury as soon as you get rid of the crutches.

If you’re injured and you’re on crutches, when your doctor says, “Okay, you can stop using the crutches,” see if there’s anything you can do, any structured routine they can give you that will help you avoid that risk of re-injury right when you’re discontinuing the crutches. That’s really important if you really want get back to running and stay running as quickly as possible.