#334 Achilles injury healed then got a stress fracture - DOC

#334 Achilles injury healed then got a stress fracture

Today on the Doc On The Run podcast, we’re talking about how someone can heal an Achilles tendon injury and then get a stress fracture.

Today on the Doc On The Run podcast, we’re talking about how someone can heal an Achilles tendon injury and then get a stress fracture.

I just got off a coaching call with a guy who I’ve talked to a number of times over the years with a number of different running injuries and this guy is not a new runner. He actually is a running coach and he understands how to train and what to do to make sure that he decreases his risk of getting an over-training injury by recovering appropriately after all of his workouts, so this guy is not a novice. But running injuries are a fact of life, if you are going to be a lifelong runner. You are always pushing to see if you can get stronger and faster and in the course of that process, it is easy to get an over-training injury. That happens.

It’s not a big deal, but it is something to deal with. Now, during our call, we were talking about his injury that he had just recovered from several months ago. He had an Achilles tendon injury and when he went to see his doctor, they put him in a fracture walking boot to try to decrease the stress to that tissue so it could heal. Well that worked, but he spent weeks in the fracture walking boot and what that can do is it can lead to both weakness and stiffness, not just in the bones, but in the soft tissues that surround the bones and then when you return to running, since your foot is basically just a lever on the end of your leg, you have more force going through the forefoot and that can put increased stress on the metatarsal bones and actually lead to something like a metatarsal stress fracture.

So after he healed his Achilles tendon injury, he started ramping up gradually and through a deliberate process of rebuilding, got back to a relatively high mileage. But he still, I think, had some weakness and stiffness and maybe even some weakness in the bones from all of that time in the fracture walking boot. He ramped up to where he was running almost 20 miles. He started to have pain and then he called me to try to do a series of coaching calls to help him work through this problem. And what we did on the call was, he was trying to figure out what exactly is this pain. So what I did was actually really simple. I just walked him through some of the lessons in the metatarsal stress fracture course for runners. 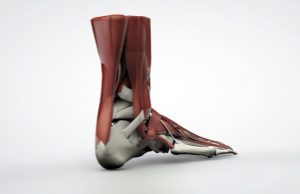 Now that’s just a self-diagnosis and self-treatment course that actually shows you exactly what to do to check your foot and tell whether or not the pain that you have on the top of your foot, in the ball of the foot, whether or not it is actually a stress fracture or a plantar plate sprain, or a neuroma or something else that can all be in the same area, but they’re different problems. And if you don’t treat the right problem, you’re not going to get the right solution. So we just went through some of those lessons in the stress fracture self-diagnosis course and through that process of him doing the little tests that are in that course, we determined that yes, he does have a metatarsal stress fracture. That’s not enough because the normal treatment for a metatarsal stress fracture is just to use a fracture walking boot for four to six weeks, but the last thing that he needs right now is another four or six weeks in a walking boot where he’s going to get even weaker and even stiffer.

So that’s not what we’re going to do. So what he was going to do is just over the next couple of days, he’s going to do some really simple things, some simple strategies that are also in the stress fracture course and he’s going to try to reduce the inflammation. And the important point is this, anybody can do that. You can go through all the YouTube videos that I have and find all the information you need to reduce the inflammation, but here’s what’s really important and what most people miss, is that what I said is, “Look, you’ve got to do this. You need to go and track your pain right now. How much pain do you have walking around? How much pain do you have when you check the metatarsal the way that I show you to check it in the metatarsal stress fracture course? How much is it exactly on a scale of one to 10? And then after you spent a couple of days reducing the inflammation, how much pain do you have then?

Exactly how much pain do you have when you check it the same way that I show you how to check it in the metatarsal stress fracture course?” You’ve got to track everything. You need to track it and track it and try things and then track it again. So if his pain drops off dramatically with just a couple of days of reducing the inflammation and not stressing it, then we know it’s really not a true stress fracture. It’s more a stress reaction. And if it calms down quickly, then what I would do is try some stuff that I showed him also in the course, how to take some of the pressure off the metatarsal so that he can just go for a test run and then check it again. But that’s the plan with him is to actually go through, take action, see the response and check in and see how we’re doing. So we’re going to check in, in a couple of days. That’s the kind of stuff I do with one-on-one coaching clients is I just help them figure out what is it like right now?

What are you going to try to do to change that? And then how is that going to get you back to running quickly? And what can you modify so that you reduce the stresses to that tissue, so you can continue to run and maintain your fitness instead of just getting weaker in a fracture walking boot? This is not complicated. This stuff that I do with one-on-one coaching clients is the exact same thing you do with your running coach when you’re trying to train. It’s just that we’re trying to get you back past this injury instead of just getting back to your marathon goal pace. So it’s a little bit of a different mindset, I suppose, but it’s really the exact same process and you can do this on your own. You just need to figure out what is wrong, how bad is it right now.

You need to write that down so you can track it. You need to try some stuff. You need to adjust. You need to change course. And that is what gets you back to running as quickly as possible. If you’ve got a running injury and you’re a runner, the most important thing you can do is figure out what you can do to get better faster. I know that sounds simple, but most runners don’t do that. So you have to figure out what it takes to recover faster and get back to running faster than the average patient, but you can’t do that if you’re doing the average treatments. So come to one of the webinars, make sure you have questions, make sure you get answers because I answer all of those questions directly myself during the webinars.

Just go to docontherun.com/webinar and sign up. They’re all free and you’re going to learn about whatever your problem is, whatever your condition is and all the tricks and tips that I use, not just with elite runners, but also those same things that I teach to doctors at medical conferences who are trying to teach runners like you how to get better and get back to running as quickly as possible. Go check it out now, docontherun.com/webinar. See you there.

Join the next webinar here: 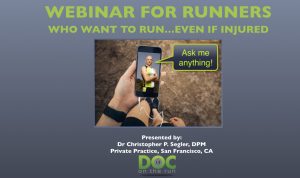