Today on the Doc On The Run podcast, we’re talking about when a runner should and shouldn’t do the hop test for a stress fracture.

I was recently lecturing at The International Foot & Ankle Foundation’s annual scientific meeting in Las Vegas, and that conference is all for podiatrists, foot and ankle surgeons, and sports medicine doctors, to figure out how to treat foot and ankle injuries better. I was doing a lecture on stress response, stress reaction and stress fractures in athletes, and one of the main points of that talk, one of the take home points for physicians, was about the hop test. 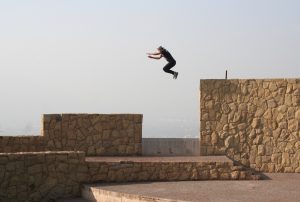 Now the hop test is one of the most utilized tests to help you decide whether or not you have a stress fracture. The way that it works is you basically have the patient stand on one foot and then hop up and down and see if this causes pain or not, and the pain is on landing, not take-off. So if you have a stress fracture, and you’re hopping up and down and it hurts when you land, that is mostly indicative of a stress fracture, but if you have pain when you take off and you’re launching, but it doesn’t hurt when you’re landing, then it’s probably a soft tissue injury.

Now, because of the overwhelming simplicity of this test, lots of runners and lots of doctors use it very, very frequently to try to make a quick diagnosis on a stress fracture. The problem is, is that this test is really only supposed to be used for one specific scenario, not stress fractures in the entire foot and ankle.

So the point is, is that if you’re trying to differentiate true shin splints, or medial tibial stress syndrome, where you have pain in the middle of your leg, just to the inside edge of the shin, and you think you have shins splints, but you might actually have a posterior tibial stress fracture or a stress fracture that’s starting sort of on the back part of your tibia or shinbone, the hop test is the best test to use to differentiate those two. So if you just have shin splints and you hop up and down, it probably won’t hurt, but if you have a tibial stress fracture that’s developing, that will hurt. And that’s the one time you should use the hop test.

Now the problem is, is that I talk to runners often who will try this hop test, and they have the potential to make an injury way, way worse. So you have to remember, there are some stress fractures that are low risk, and some stress fractures that are high risk. The ones that are high risk either are in a location and have an orientation of the crack that could easily allow the bone to fully break if you were to do the hop test, or they’re an injury that has a high probability of not healing because the blood supply isn’t really great in that area.

Ones that are high risk though are tibial stress fractures at the end of your tibia, by the ankle. So if you think you have shin splints and you’re poking around and you have pain around your ankle, you should never do the hop test. You can actually have an ankle fracture that develops from trying to do that, so you do not want to do that test. In fact sometimes, when you have that kind of injury, doctors will put a screw in it to make sure it doesn’t break.

Also, in the middle of your foot, at the navicular, that’s a bone that’s very, very high risk and you do not want to do the hop test on that. If you have a sesamoid stress fracture or pain under the big toe joint, you do not want to do the hop test. That thing is the size of a kidney bean and you can break it into a bunch of pieces if you hop on it. Also, the outside of your foot, the fifth metatarsal bone, the base of the fifth metatarsal bone on the outside of your foot, if you have a stress fracture there, it can actually turn into a thing called a Jones fracture, which is one of the worst possible fractures you can get in your foot when you’re a runner.

So make sure that you check in with a doctor if you think you have a stress fracture before you start doing the hop test, so that you don’t wind up causing an irreparable injury that prevents you from getting back to running.