#601 5 changes on X-rays with Hallux Rigidus

Today on the Doc On The Run podcast, we’re talking about five changes on x-rays when you get hallux rigidus.

On this episode, we’re talking about some of the changes that can happen when you get hallux rigidus or hallux limitus and then get an x-ray and your doctor tells you’ve got this condition. So we’re going to talk about these five things that you can see commonly on the x-rays when you have hallux rigidus.

Now, the first thing is that hallux means big toe, rigid means it doesn’t move, limited or limitus means it’s limited in the way that it moves and when we get x-rays of your foot, there are really a couple of important views. There’s what we call the lateral view or the one from the side and what we’re looking at in that one is we’re looking at the first metatarsal bone, which sits here like that. That’s this bone right here and then we’re also looking at the proximal phalanx bone here. Then you may also notice these two little bones sitting here underneath the big toe joints. So these are the main bones that you have. You have the first metatarsal, the proximal phalanx, distal phalanx, and the sesamoid bones.

When you look at the foot from what we call the AP view, antra posterior view or dorsal planter view, whichever one your doctor might call it. It’s not complicated. It’s just looking from the top down. What you’re looking at is the first metatarsal bone sitting over here, proximal phalanx bone, and the intermediate phalanx bone, which basically is sitting up under the big toenail and then you can see the sesamoids here. Now, there are basically five changes that you’ll start to see on the x-rays that may be significant.

The first one is spurring. So if you see bone spurs on the x-rays, what does that mean? Well, usually what you get first is that you start getting bone spurs forming up here, and eventually it’ll turn into something like this. You’ll have little spurs or abnormal little bone growths that happen on the top of the joint. They’ll form little bumps up here, little bumps up here and if yours is bad enough, you might actually be able to feel those under the skin.

So you’ll have those on the top of the foot that are forming here and here and sometimes you’ll get spurring that happens on the side of the joint like that. Now those spurs are trying to stop the painful motion in your foot. It’s a thing that happens if you dig ditches, you’ll get callouses on your hand and if you do enough motion that’s painful in a joint, the arthritic process develops bone spurring. That’s supposed to slow down and stop that painful motions. So that’s number one, is spurring. 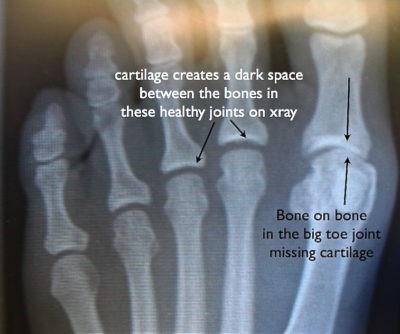 Normally, a first metatarsal head, that bone, is round like this and because it becomes painful and your body tries to change it it will actually, the end of it, will start to flatten off a little bit like that as the condition progresses. And then over time, it will get really flat like that. Then eventually it develops so much spurring, it not only gets flat, it actually starts to become ridged where you have these bone spurs on the side, it develops a central ridge, which slows down that motion more, and it actually starts to look like a w. So the flattening of the metatarsal head is the second thing you can see on an x-ray that’s suggestive of hallux rigidus.

Now, also, because you’re getting arthritis developing you’ll get joint space narrowing. Now, remember there are no empty spaces on x-rays. So when you see an empty space, there’s something there taking up that space and when you see joint space narrowing, it means that the cartilage is shrinking. So if you look at this from the side view, and you remember that you have a little bumper of cartilage here, and you have a little bumper of cartilage there. Well, that cartilage is keeping those bones apart. So as that cartilage gets squished and damaged and worn away, the bone gets closer together.

So then the first metatarsal head, when you look at it on the side view, it may look like there’s no space. What there’s no space what that means is the cartilage is gone. So that’s what’s happened is the cartilage is basically worn away and there’s not as much space. It’s harder to see on this view because it’s round, but on the side view, we can tell that’s a lot of narrowing in the joint space.

Then the last thing is that’s suggestive of this problem is what we call traction enlargement of the sesamoids. Why do you get that? Okay, so remember, the sesamoid bones are sitting under the joint. You have the flexor tendon that attaches to the toe here and if you get stiffer and it takes more resistance to pull the toe up when you walk, the flexor tendon here is actually pulling on the sesamoid in both directions every time you take a step. So it pulls that way and it pulls this way every time you take a step and over time, what happens is the sesamoids because they’re effectively getting stretched, they’ll actually get bigger. When you get traction enlargement of the sesamoids, they’ll actually start to look longer and more ovoid because you have literally been pulling on them because that joint is so stiff that it is actually stretching the sesamoids and making them larger over time.

If your doctor tells you have hallux rigidus or hallux limitus, it’s probably one of these things, spurring, flattening, joint space, narrowing the sclerosis or the eburnation, where you get this thickness in the bone or traction enlargement of the sesamoids. But those are all the things that we commonly see on x-rays that are suggestive of this condition called hallux limitus or hallux rigidus.

Now, if you want to know more about this condition, I wrote a paper that was published in a medical journal many, many years ago, when I was at med school. It was actually written for medical students to teach people who didn’t really know that much about it, all of these things. So if you have this condition, you might find it really interesting. It’s called From Functional Hallux Limitus to Hallux Rigidus, A Comprehensive Review Of The Literature and I go through and explain all this stuff in really deep detail in there. You can get it for free by going to docontherun.com/halluxrigidusreview. So check it out and I’ll see you in the next training.