Today on the Doc On The Run podcast, we’re talking about a dancer’s fifth metatarsal fracture in a runner who was training for Boston.

Now, today’s episode actually comes from Eryn and she’s somebody who was listening to the Doc On The Run podcast and then sent in a question. She said that she was 10 weeks out after getting a dancer’s fracture in the fifth metatarsal while she was trying to qualify for Boston and getting ready.

What she said is, “I’m one week in using my EXOGEN bone stimulator one time a day for 20 minutes. I heard you say that you had a runner who healed after two weeks using the device.” Well, that’s true. Well, she also wanted to know about, “What else was your patient doing? Did they follow the standard protocol? Was he taking any supplements or other treatment to help the bone?”

Well, these are great questions. So Eryn, sorry to hear about getting the dancer’s fracture when you were trying to qualify for Boston, but that depends on whether or not that, that would actually work for you first of all. So, I would tell you also that you cannot compare somebody else’s experience to yours. Two weeks is completely and totally abnormal for somebody healing that quickly, even with using an EXOGEN bone stimulator. It was also a different fracture than yours. It was a second metatarsal fracture, not a fifth metatarsal fracture and that brings up a really important point, and that is that based on your description, I don’t actually know what kind of fracture you have.

Believe it or not, there are two different kinds of fractures of the fifth metatarsal bone the doctors sometimes call dancer’s fracture. The first thing is I thought, “Maybe, we should talk about that.” If you’re watching the YouTube version of this, you’ll be able to see what I’m drawing. But if not, you’re just going to have to check that out. But I’ll try to explain this as we go along. 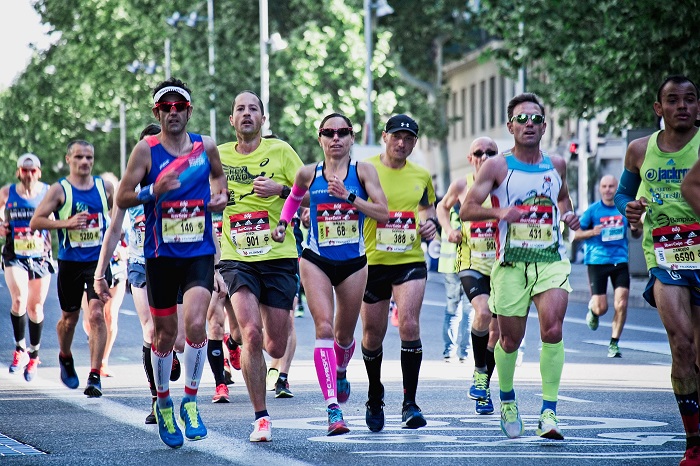 It is oftentimes significantly displaced, meaning maybe a couple of millimeters moved out of position, but those typically heal without any real incident or any real trouble and that’s the one that’s most often referred to as a dancer’s fracture. So, that’s the one at least was classically described that way and originally described that way. It was noted to happen in dancers, but that’s usually from a mechanism where you actually fall or trip over something.

An avulsion fracture is different. That’s where the bone actually rips right here. Why does that happen? Well, the peroneus brevis tendon is the one that attaches to that bump, and it goes way up the side of your leg. It’s on the outside of your leg, but the peroneus brevis tendon is attaching to this bump right here on the base of the fifth metatarsal and it is the one that’s on the furthest outside of your foot. So if you start to roll your ankle over, it pulls so hard sometimes, it’ll actually rip that piece of bone off. But that’s typically from a straight up inversion ankle sprain, where you tripped over a root or a rock or something like that.

If you’re running and you actually did that, you tripped over a root or a rock and it actually pulled it off, then that would happen, and somebody could have called it a dancer’s fracture. They heal, but not quite as well as the shaft fracture. So if you had a true dancer’s fracture, it’s actually more likely to heal faster, in my experience, than an avulsion fracture and these, even if they’re displaced, they’ll actually heal pretty well. So I’ve seen patients that have significant displacement, several millimeters, and it still heals.

Even though really and truly it might heal, and it would look funny because the bone heals between there, and it looks irregular, some of them look a little bit like a Z on the x-ray. So they don’t look great on the x-ray, but they function just fine. Whereas this one, if it really displaces and you pull that piece of bone off and it’s really displaced so that you’ve got, if you look at it this way, and we say, this is where the piece of volar’s off of there, and it’s really far apart, like a few millimeters, it may not heal at all.  That could significantly affect the function of your foot. It’s really important to make sure you understand exactly which type of fracture you had affecting the fifth metatarsal, in order to make sure that you know you’re getting the right treatment.

Now, anything other than one time a day for 20 minutes is an FDA off-label use, meaning that I often prescribe something other than that for patients, but not unless I know their exact circumstances. And I certainly wouldn’t tell you to do it because I don’t know anything about your case. So you’re not my patient, so I can’t tell you what to do, but I will tell you that the normal routine for an EXOGEN bone stimulator for a fifth metatarsal fracture, regardless of which type it is, is actually FDA approved, one time a day for 20 minutes. That’s the normal use, that’s what we normally do, but that’s not what I always do. It just depends on the runner’s circumstances. And yes, there’s always other stuff you can do.

Supplements also can help. Yes, I often prescribe different kinds of supplements. It depends on the situation. So for most runners, when they’re initially in the early phase, I usually recommend that they do collagen supplementation. But it depends on where you are in your phase of recovery about what’s going to actually help the most because initially, when you get a fracture, there’s a lot of collagen formation that takes place to stabilize a fracture in development of the soft callus that keeps it glued together.

But then later on, that’s kind of done and you have more of the ossification where you need more calcium and vitamin D for the ossification or turning it into bone process that happens later. So, it just depends. Now, it depends on whether or not you got it from trauma, whether you got it from rolling your ankle, whether you tripped and fell over something, or if it developed as a consequence of a true fifth metatarsal stress fracture, which is also quite unusual, but it can happen.

If that is your case, you might want to check out the Stress Fracture Masterclass. Now, that’s a thing where I go into a deep dive about all of this stuff that I do with runners who have metatarsal stress fractures, and what you really need to understand if you have a metatarsal stress fracture, and you want to maintain your running fitness and get back to running as quickly as possible. You can get it for free. Go check it out. It’s a deep dive web class, it’s about half an hour, and you can get at docontherun.com/stressfracturemasterclass. So go check it out, and I’ll see you in the training.