Today, on the Doc On The Run podcast, we’re talking about two different joint surgeries for plantar plate repair.

Today, we’re talking about two different joint surgeries that are commonly performed as a component of plantar plate repair in injured runners. So, this is a really important thing to understand. There’s two different kind of procedures. They both have different risks and benefits, and we’re going to talk briefly about them. So, you at least know what they are. So if your doctor tries to sell you one of these procedures, you can at least know what you’re buying. So, that’s what we’re going to talk about.

Now, I do lots of second opinions for runners and I’ll tell you many times it kind of shocks me when the runners call me and they have no idea what it all the doctor is even planning on doing in the operating room. So, you’ve got to ask questions. That’s super important. You’re never going to get a decent second opinion if you don’t even know what the first opinion is.

When you have a plantar plate injury, simply put if this is your foot and you got the toe here, you have the second metatarsal bone, which comes down here and then you have the proximal phalanx bone, the intermediate phalanx bone and the distal phalanx bone, that’s what’s in your toe. But if the doctor’s talking about doing a joint surgery on you, it’s probably here and it is probably because you have a little bit of a deformity in the toe where basically instead of your toe really being straight, what you have is you started to develop a hammer toe. So, the plantar plate is actually getting weaker and the toe is starting to become crooked. 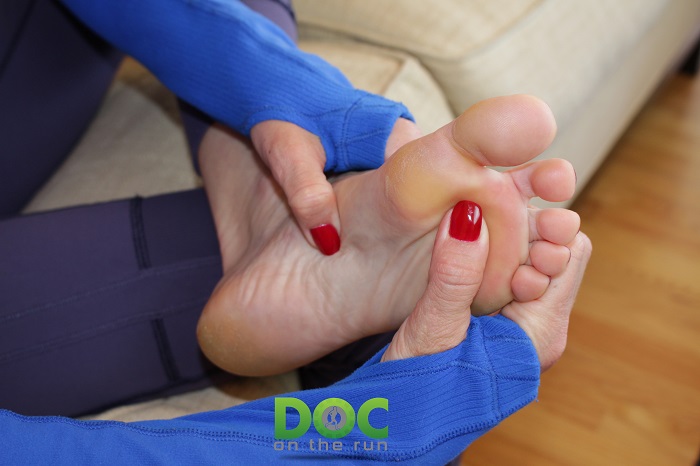 When this bone, the proximal phalanx bone starts to drift upward, well, as it moves up, it puts more tension on the plantar plate. It’s pulling more and if you have a little tear in the plantar plate ligament, down in here, well, the more you pull the toe up like that, the more crooked it becomes, the more you get stress and strain on the ligament. Then the idea is to try to straighten the toe out, get the toe back down on the ground, where it belongs, so that you’ve got the toe sitting flat on the ground and there’s a couple of ways to do that.

One of them is to actually do a procedure where we actually fuse this joint. So, option number one is fusion. The medical term for that is arthro for joint and desis for don’t move basically. So, it’s arthrodesis and that’s where we actually fuse the joint. We do an arthrodesis procedure if this is the head of the metatarsal here, and this is the proximal phalanx bone, that’s the intermediate phalanx bone and then that’s the distal phalanx bone. What we do is we actually go in, when we do the fusion, what we do is we go in there and we actually, we make an incision. We open the toe, we open the joint, we actually remove the cartilage. So, we take out the cartilage inside the joint and we actually remove or roughen the surfaces of the bone here. We actually sandwich it together. Then put in some kind of fixation.

Sometimes doctors will put in a little implant across there. That’s a little thing called stayfuse. It snaps together. I’ve done lots of those procedures. It’s very, very stable, but that’s only one way to do it. There are many, many ways to do this. Sometimes the doctors will put it together like that and actually put a screw that actually goes in all the way through this like that and then take that out later. Sometimes, they’ll actually stick a pin in through all those bones that sticks out the end of the toe and they remove that once it’s healed, but there’s lots of ways to provide stability here. But basically what you’re doing is you’re removing the joint entirely and then when this heals, this is all one solid piece of bone. If that happens, it’s never going to become crooked like that. What that does obviously is, it pulls this bone down closer to the ground and that decreases the stress and strain to the plantar plate ligament on the bottom of the joint. That’s procedure number. That’s a fusion, that’s arthrodesis.

The second procedure is actually joint removal and this is a very similar name. It’s actually arthro for joint and plasty where we cut out the joint and all we do in that case is, it’s kind of similar, in that you got the toe here and you have the bones same way. But all we do in this procedure is we actually take the end of the bone right here. In most cases, what the doctor does is they literally go in and they just cut that part of the bone off that has the joint surface and they remove it and that creates a lot more space. So, when you take this and you cut it off, then that reduces a lot of the tension and then suddenly the toe actually comes down and becomes straighter. So, when you do this arthroplasty procedure where you just cut off this end of the bone, and then you pull the toe down and straighten it, sometimes you do other procedures to make it stay in place. But, basically that’s all you’ve really done.

With arthroplasty, all you’re doing is you’re removing one side of the joint that creates a lot of space in there that allows the toe to become flat. Sometimes the surgeon will just tighten up the ligaments to the top. Sometimes they do a tendon transfer, but in short, these are the two options. So, what I get is a question a lot and the reason I wanted to do this episode was that a lot of times patients will say, my doctor said, I need a joint surgery and they think it’s actually here. They think it’s a joint replacement where the toe connects to the foot and that’s not the case. It’s always one of these two. We’re either doing an arthroplasty where you’re just removing the joint, which keeps it flexible, or you’re having a fusion, which makes it stiffer.

What’s the advantage? Well, the advantage is that when it’s more flexible, it feels more natural, but there’s a risk it can go back into a hammer toe. When you have the fusion, it’s a little bit stiffer, the toe is straight and sometimes it looks a little too straight, frankly, it looks a little weird, but you’re never going to get a hammer toe again and it will reduce the stress and strain, generally speaking, more predictably than the other.

That’s the difference between these two procedures, fusion versus removing the joint or arthrodesis versus arthroplasty when you have a plantar plate ligament sprain, and you’re trying to get it heal. So, make sure you understand which of these procedures your doctor is trying to offer you before you get a second opinion, so that you can really compare the thinking between the first doctor’s approach and the second opinion doctor’s approach when you’re trying to figure out what’s best for you.

Thanks for checking this out. If you like this episode, if you found it helpful, please like it, share it and I’ll see you in the next episode.