Today on the Doc On The Run podcast, we’re talking about the four types of procedures you might get offered as surgical correction for a plantar plate sprain.

Today we’re talking about the four classes of procedures that affect four different anatomic structures in your foot when you have a plantar plate injury. The reason this is important for you is that if you see 10 different doctors, you’re going to get several different opinions and it’s unlikely that all 10 of them would actually tell you you just need one surgery or that you even need the same surgery.

I think it’s really helpful if you’re really frustrated, you’re really demoralized and you’re in this very vulnerable place where it’d be easy for a doctor to talk you into surgery without you really understanding what’s going on. That’s what we’re going to talk about today is give you a basic understanding of the four different kinds of surgeries that are offered to patients with these injuries so that you can make a better decision when you talk to your doctor.

We’ve got four different kinds of procedures we’re going to talk about. Now, I’m going to draw some pictures and make a couple of notes. Number one is that I have horrible handwriting. I’m a doctor. I’m supposed to have bad handwriting, but it’s apparently especially bad. I’m also not an artist so my drawing is equally bad, but I think it will be helpful to illustrate some of these things for you. If you’re listening to this, I’m going to try to explain it as well as I can, but you might want to watch the YouTube version of it so that you can actually see the video version of it as well. That might be helpful, but this is what we’re going to talk about.

When we look at your foot, your foot obviously has lots of stuff in it, but the first thing is that you have the structure of your foot. If we look at it in cross section sort of through the second toe, well, you’ve got the structural part of your foot, which is the skeleton. Basically you’ve got the second metatarsal bone sitting here more or less like that. Then you have three little bones in the toe. You have the proximal phalanx bone, the intermediate phalanx bone in the middle, and then the distal phalanx bone at the end of the toe. You have three bones in the toe and the metatarsal bone that are actually affecting this region that we call the plantar plate at where you have trouble. 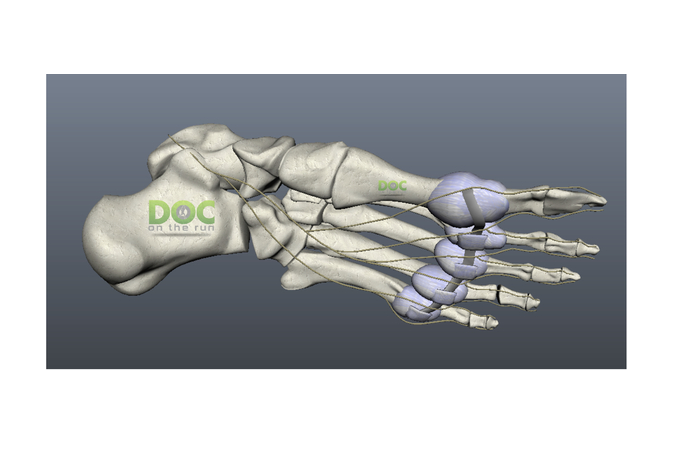 The second thing you can have is a tendon. A tendon, unlike a ligament that just connects a bone to a bone, a tendon actually connects a muscle to a bone. For example, in your foot, you’ve got a muscle on the back of your leg way up here. Doesn’t really matter. I’m not going to draw all the other stuff, but it’s the flexor digitorum longus muscle. It comes down through the tarsal tunnel, down around the bottom of your foot, and then comes underneath here and actually attaches to this bone, the distal phalanx at the end of your toe.

The reason that’s important is that if it pulls too much, it can actually pull your toe into a hammer toe because it’s pulling from the end. When you pull your finger like this, just like the toe, the flexor actually pulls it toward you and can cock the toe up. That increased position of the toe being bent like that will actually increase force to the plantar plate ligament. That’s the second thing is that you can have a tendon where you have a surgery offered to you to correct or adjust that tendon in some way.

Number three, you can have surgery on the bone. A lot of times this confuses people because they say, “Well, I’ve just got this little ligament thing. Why does the doctor want to operate on the bone?” We’ll talk about that. There are a couple of different ways it can be done. But in general, what we’re talking about is the metatarsal bone here. We’ll talk about why that can be a problem.

Then the fourth thing is the joint. The only other real structure you have in this area is a joint. Now, most people think that they’re going to have surgery on this joint. Technically if you have a plantar plate repair, yes, that’s surgery on the joint. But usually it’s actually in the toe where the joint surgery happens. We’ll talk about that too.

First things first, let’s talk about the ligament. If you have a ligament and you have a little tear in the ligament and it’s moving apart, well you want to do something to reinforce that. Sometimes what we do is we do what we call a primary repair of the plantar plate, which means we go in and we sew it up. We literally make a big incision on the bottom of the foot and we go in and fix that.

What that looks like is that when we look at the foot from the bottom where the is the second toe, third toe, fourth toe, fifth toe, et cetera, and your second metatarsal is sitting down here and you have the three bones and you have the joint capsule. We actually make a big incision right on the bottom of the foot like that, a linear incision. We make that incision. We go down and we actually put suture in here, stitches, and we sew up and reinforce the plantar plate ligament, and sometimes even put a little tiny bone anchor in the base of that bone to provide more stability and actually tighten it down. That’s number one.

The next thing is the bone. A lot of times what doctors will say is will say, “Well, if you look at this, if we think about your foot, here’s your foot, you’ve got the metatarsal bone, this one coming down toward the ground and it’s too long. And because it’s too long, there’s too much pressure on the ground. So if we can actually move it up away from the ground, that would be better. If we do the procedure where we actually cut the bone and we move the bone up so that we reposition the end of the bone so that it’s up here instead of down there and we move it away from the ground, then there’ll be less force on the bone.” We might do something called an osteotomy, which is a fancy word for cut the bone and put a screw in it to change its length or position. You could have an osteotomy to shorten the metatarsal bone.

Then the last procedure is on the joint. Generally speaking, it’s on the joint here. If you have a hammer toe developing, and a lot of times, if you do a lot of research on the plantar plate sprain, you’ll find it described as pre dislocation syndrome. What that means is the pre dislocation syndromes mean the toe’s going to dislocate and turn into a hammer toe. It’s going to be bent. When it gets bent, if you straighten that joint and you make it stay straight by doing surgery here on the joint, the inter phalangeal joint or what we call for short, the IPJ, if the doctor may fuse it, they may just remove the joint entirely, a couple of different options, but they might say you need to have surgery on the joint in the toe in order to help prevent this from coming back.

These are the four categories of procedures and I will tell you that if you’re going to see a doctor, if you have a plantar plate sprain and they’re offering any combination of these procedures to you, you know how to find out exactly what is offered, because I’ve actually seen patients who not only had the surgery, they’re not even sure which surgery they had. They say, “I don’t know. I think they did something with a hammer toe. I think they did something with the plantar plate. I don’t really know.”

Obviously if you’re going to get a second opinion, if you’re going to get somebody to talk to you about what your activities are, what you want to do and whether or not all these procedures are actually necessary for you, you have to know what is offered to you specifically. Is it a fusion or an arthroplasty? It doesn’t matter what that is. We’ll talk about that in a separate episode, but you’ve got to know what each of these procedures are specifically that they have offered to you.

If you’re confused, you can always request the note from your last visit and it will say, because the doctor will put in there in medical terminology something like primary repair of the plantar plate, or a osteotomy or a PIPJ fusion or whatever. Any doctor doing your second opinion would then know what those things mean and they could explain it to you.

Make sure you understand what the procedures are, make sure you understand why you’re having each kind of surgery and that will help you make sure that you get the best result and go into it with making the best, most informed decision. That is certainly important if you’re a runner and you want to get back to running. If you found this helpful, please rate it, review it, like it, share it, take a screenshot, put it on your phone, send it to somebody you think has this problem and I’ll see you in the next episode.