#526 Is a boot enough for a tibial stress fracture in runners? - DOC

#526 Is a boot enough for a tibial stress fracture in runners?

Is a fracture walking boot enough when you have a tibial stress fracture and you’re a runner? Well, that’s what we’re talking about today on the Doc On The Run podcast.

But if you get a tibial stress fracture, the chances are really good that the doctor’s going to do something to really restrict your running, and potentially your ability to move around at all. For example, if you get a fracture walking boot and it’s on your right foot, well, you can’t even drive a car. So you’ve got to take this seriously.

I talk to runners all the time who have injuries like tibial stress fractures, and they’re really confused about what to do, because it doesn’t seem to really match what they heard from the doctor. Now, here’s the thing. When you get a tibial stress fracture, there are lots of different things that can actually cause it. But what causes it, of course, is stress. Stress to the shin bone, to the tibia because, you stand on your leg. We always think of it as axial loading, of up and down motion, of pounding when you run, of landing on the shin, of landing on the tibia, of banging it over and over in some way that injures it. 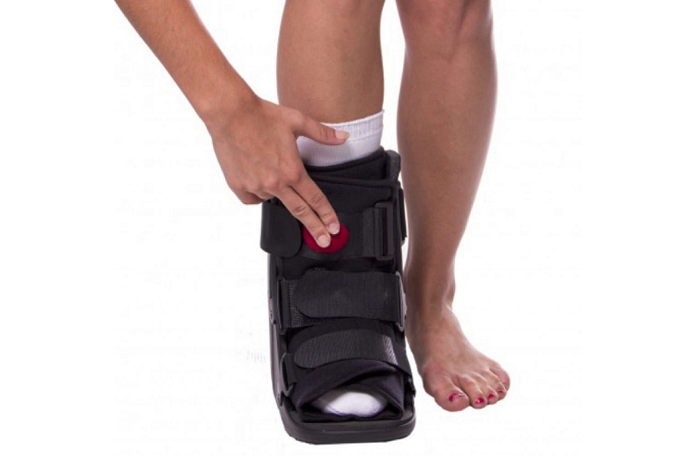 Now that’s most of the time what happens. But, you can also get an injury that causes a stress fracture in the tibia because the muscles that attach to the bone are actually pulling and they’re pulling down the covering of the bone. They irritate the bone, you get chronic inflammation around the bone, and that can lead to a tibial stress fracture.

The thing is that if you use a fracture walking boot, it’s very effective. It’s stopping some of the motion and protecting the leg by decreasing some of those forces go through the leg. It frankly also makes you walk a whole lot slower, which also helps to reduce the stress and strain on the tibia.

But when I see injured runners, particularly people who are training for a marathon or their high school cross country runners, and they really want to run, they really need to maintain their fitness and they’re trying to figure out how to get back to running quickly. One of the questions they ask that’s completely reasonable, is the fracture walking boot really enough or not? Should I be doing more or maybe even doing less?

But most of the time when I see injured runners and I hear their circumstances, and we talk about the severity of their injury, I think it’s usually worth using crutches for some period of time to actually really reduce the stress and strain to all those forces going through the tibia, to really get that stress under your threshold for healing, so you could recover faster. Because, when you’re an injured runner and you’re not running, you’re getting a linear increase in strength of the bone, but you’re getting an exponential increase in loss of fitness.

All of the things that happen as a consequence of sitting still, not training, not running, wearing a fractured walking boot, all of those things cost you more and more and more with every additional week that you add on to that treatment. So I think in most cases, it’s better with the athletes I see, the ones I talk to on webcam who understand that we can kind of compress the healing in a way, if you’re a little more aggressive early on.

You’ve got to talk to your doctor and make them understand that you really want to get back to running and you’re trying to figure out not what their routine is, what they do for tibial stress fractures, but what you should do in your particular unique situation. That’s really the most important thing.

So if you’ve been told you have a tibial stress fraction and you’re trying to figure out what the real steps are that I use to actually help you figure this out, if we were on a webcam call or if I was sitting in your living room doing a house call. Well, those things are outlined in the 12 steps to running injury recovery. We’ll have a link at the bottom of the show notes for this particular episode, or you can go to docontherun.com/12steps, and you can check out the whole presentation there and I’ll show you in the web class exactly what I do.