DOC » #505 Can I ski with a metatarsal stress fracture?

#505 Can I ski with a metatarsal stress fracture?

Can I ski with a metatarsal stress fracture? Well, that’s a great question and that’s what we’re talking about today on the Doc On The Run Podcast.

Now this may seem like a crazy question when you first think about it, because skiing seems like a high stress activity. But I have had lots of runners who have asked me this question, and usually when they do, they have thought about it, and they point out that a ski boot is a very stiff and very protective piece of equipment.

In fact, in large part, it is stiffer and more protective than a fracture walking boot. It’s basically like wearing a cast, you just happen to have skis attached to it, and you’re doing something fun. The question though is not really, if it’s safe for you to wear the boot, the problem is, is it safe for you to ski with the boot and that leads to several questions that you’ve really got to ask yourself if you want to think about whether or not it’s actually safe for you to do it.

Does it hurt when you put the boot on?

Some ski boots are very difficult to get in and out of and when you have to push your foot, and twist it, and strain it, and force it into that ski boot, you just might be stressing the metatarsal in a way that could re-injure it or slow down the healing. You definitely do not want to do that. So, if it hurts when you’re putting on your ski boot, it is definitely not safe for you to do it. If it doesn’t hurt, then it might be safe for you to do it.

Does it hurt when you ski? 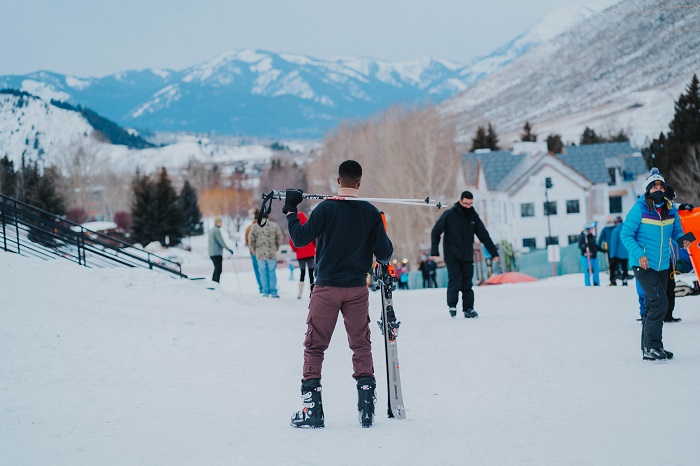 Now, the second thing is, does it hurt when you ski? So, if you’re skiing and you don’t feel any pain, that’s a good sign. The problem is, is that you as an athlete, somebody who wants to be doing something active are going to be having so much fun skiing, you’re going to be exercising. You’re going to have all these endorphins; you’re going to be outside. It’s all going to be enjoyable and that all makes it more difficult for you to actually notice the discomfort in your foot.

Does it hurt when you take the boot off?

Now, the third question is, does it hurt when you’re taking the boot off? So once you’re done skiing, if you have to really crank, and pull, and twist, and yank on your foot to get it out of the boot, and it causes any pain at all, it is definitely not a good idea, and it’s not safe for you to do it.

Now, you’re always trying to weigh of course, the value of doing the exercise and the damage that you might be doing to the metatarsal, and in terms of slowing down that healing process. This is something you have to weigh as an individual in a case cut by case basis. But if it really hurts when you’re taking off the boot, and it causes a bunch of pain or swelling, then that’s not really a great sign.

Does it hurt later in the day after you ski?

Now the fourth thing is, does it hurt later in the day after you ski? So, when you get home and you’re relaxing in the evening, if you start having aching throbbing pain that you didn’t have before, that’s a clear indication that you should not be skiing because you’ve applied too much stress to the boot during the day, and now it’s aching and throbbing at the end of the day. If that’s your situation, it is probably going to slow down your healing, and it may delay you from getting back to running. So, you’ve got to be really thoughtful and careful about it and analyzing that at the end of the day.

Does hurt when you wake up in the morning after skiing?

So, if you wake up in the morning and then you notice pain that’s increased compared to what you had before, you shouldn’t be doing it, you’re applying too much stress to the bone. The alternative is that you could try to reduce some of the stress and strain to that injured metatarsal bone, by applying some padding, and using some of the strategies that I talk about in the metatarsal stress fracture course.

You’ve got to do something to reduce the stress and strain to the injured metatarsal so that you can remain active while that injury continues to heal. That’s really the big key with managing metatarsal stress fractures, if you want to get back to running as quickly as possible.