DOC » #495 How can a tarsal coalition start causing pain in a runner?

#495 How can a tarsal coalition start causing pain in a runner?

How can a tarsal coalition start causing pain in a runner? Well, that’s a great question, and that’s what we’re talking about today on the Doc On The Run Podcast.

Today’s episode actually comes from a second opinion telemedicine visit I did with a runner who wanted to know more about a tarsal coalition. He had an X-ray and had this thing called a C sign, which is where, when you look at the X-ray, you’ve actually got right around the talus and the calcaneus here, the heel bone, you actually have this bridging bright white thing that looks like a C sitting there on your X-ray. It’s abnormal, but it’s one of the classic signs of a tarsal coalition.

Tarsal coalition just means you have an abnormal union between some of the bones or the tarsal bones in the rear foot or midfoot and it’s causing a restriction of motion because they’re adhered together and connected, either with cartilage, or scar tissue, fibrous tissue, or even bone.

There are four different ways that tarsal coalitions can start causing pain.

Now, the first one is if you have a really severe coalition. Let’s say, for example, you have a talocalcaneal coalition, meaning that these two bones are connected together. If they’re connected together and they hold your foot in a supinated position, well, that means that your foot’s tilted over like this. If you can’t pronate and collapse to actually 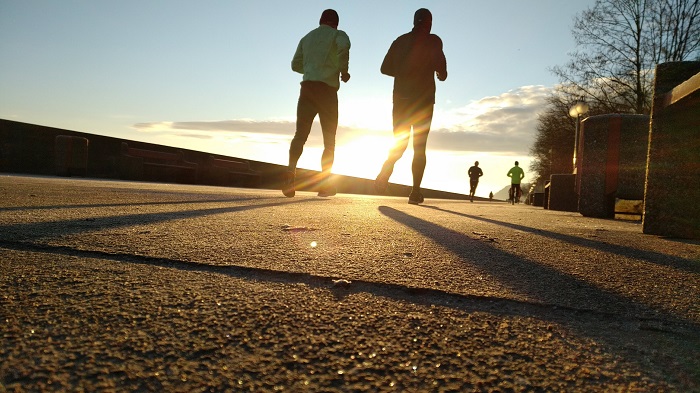 loosen the foot as you run, then you’re basically going to apply pressure to the outside of the foot, and it can lead to stress fractures in the fourth and fifth metatarsal. That’s actually a really common thing that happens in runners that have tarsal coalitions.

The second thing is that you can get tendon or ligament strain. Because, you’ve got 26 bones in the foot. And so if you have an abnormal union between two of these bones, that’d mean that that joint doesn’t move. When that joint doesn’t move, that motion has to go somewhere. It’s a really simple biomechanical principle that in any walking, moving system, if you remove the natural motion that occurs in one joint, that motion has to basically happen somewhere else, either in front of, or behind, or what we refer to as proximal or distal to that specific joint. Now, what that means is you’re getting more motion, more abnormal motion, at another joint, and it can stretch and strain the tendons or ligaments that support that other joint. That’s the second way it can happen.

Jamming of other joints

The third way that it can happen is that since you have one joint that’s locked up and you’re trying to forcibly move in a way that’s not really natural, you can actually jam, or injure, or irritate other joints that are in the neighborhood of that one joint that’s restricted because of the tarsal coalition.

Injury to the coalition itself

The fourth one is actually injury to the coalition itself. Like, if you have a tarsal coalition where there’s a bridge of bone between two separate bones and then you step in a pothole or you trip over a root when you’re running, or if you run a long distance on sand and you just apply force over and over and over to that little bridge of bone that’s not natural, it might crack. If you have a soft tissue coalition and you actually trip and fall and rip the coalition, then that could hurt just because you have a new injury to the soft tissue between those two bones.

But those are some of the ways that you can actually get pain from a coalition if you’re a runner. So it’s really important to make sure though that you really talk to somebody who understands running injuries. If you have a tarsal coalition and the doctor tells you, “Well, you have a coalition, you just need a surgery called a tarsal coalition take-down,” get a second opinion first.

You’ve got to make sure that that’s really going to get you back to running and that it’s not going to cause problems later that might actually make it more difficult for you to run. So always get a second opinion when somebody tells you, “You need tarsal coalition surgery.”