Today on the Doc On The Run Podcast, we’re talking about running shoe wear patterns with hallux rigidus.

Today’s discussion actually comes from part of a question that I got from a runner in the Monday, Wednesday, Friday Coaching Group, where people sign up, we get all their questions answered every Monday, Wednesday, and Friday to make sure that they stay on track as they’re actually recovering from a running injury.

This is someone who had a condition called hallux rigidus. Hallux is just the medical term for big toe and rigidus obviously suggests that it’s rigid or doesn’t move. So when you get hallux rigidus, your big toe doesn’t actually dorsiflex or come up away from the ground enough to allow you to walk or run without doing something to compensate.

Many times when you run with hallux rigidus, you get compensation or an alteration in your running form that can put stress and strain on other things like the perineal tendons, or the metatarsals, or other structures that are taking more force than they normally would just to try to work around this stiffness in the big toe joint.

So he actually asked me what was the best way to assess your running shoes? And if you could assess the running shoes to see if you have hallux rigidus or not? The short answer is yes, you can, but it’s not actually running shoes that allow you to assess it the best.

When I do house calls and see runners in person, it really helps to look at their running shoes, particularly their older running shoes. The new ones don’t matter. I know you want to show them off, but they’re not helpful because they haven’t had any wear on the sole yet that lets the podiatrist look at them and assess your wear pattern.

Now, back to the discussion about hallux rigidus and which shoes are best. Well, part of that is, believe it or not, dress shoes. If you have leather sole dress shoes, they are the best at assessing the wear pattern on somebody’s foot structure. Now I know you don’t run in them and you’re walking biomechanics will be a little bit different than you’re running biomechanics because it’s different. You’re airborne part of the time when you’re running and you’re not typically airborne part of the time when you’re walking. But the walking shoes that you use, particularly those that have flat leather soles can really help a podiatrist look at them and tell. 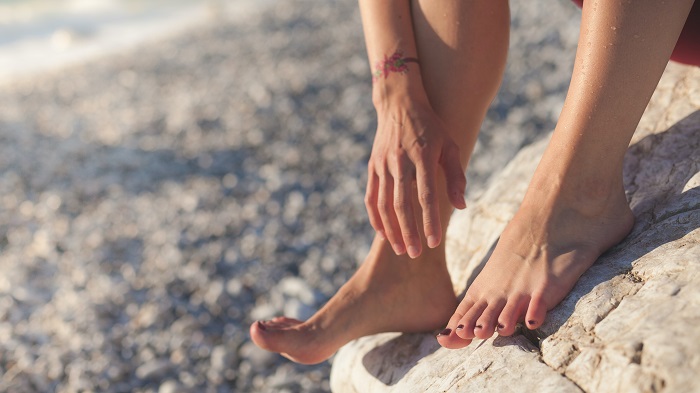 I have an example of a shoe that has that here that I wanted to share with you. So this is a leather dress sole, and this one’s very worn out and the more worn out, the better. Now, if you look at this, the first thing you notice is that the heel is really worn out way over here on the side. It’s not symmetrical at all. It’s really the entire outside or lateral edge of the sole of the show is landing. So the foot is hitting on the outside of the heel first, big toe up, which is one of the first signs of hallux rigidus. Now everybody hits a little bit on the side, but the more worn out it is over on the side like this, the more indicative it is of a wear pattern suggestive of hallux rigidus.

The second thing is the wear pattern at the big toe. If you look here, it is really, really worn out all the way through the big toe and that is completely abnormal. In addition, the center of it obviously has a hole worn all the way through, but what you can actually see, if you look closely, you can see there’s actually some scuff marks and scratches all the way around this area that indicate that the foot is actually twisting at the midfoot, which is why it wore through where the metatarsals are.

When you walk, normally 50% of your weight goes through the first metatarsal and then 2, 3, 4, and 5 all divide up the rest. But in this one, clearly two and three are taking more of the beating here than one for sure, because there’s no hole under where the first metatarsal is.

Now, what does all this mean? Well, what is happening here with this particular wear pattern is really simple. The heel hits on the ground when it lands and then the person with hallux rigidus, knowing that the big toe does not want to move, actually rolls down the outside of the foot and I have a foot model here that I think will help you see that a little better.

So if you land on the heel and you’re going to come down straight, then it would be more centered, stands to reason right? But if you have hallux rigidus and the big toe doesn’t move, then most people with hallux rigidus will actually land on the heel on the outside and they roll down the outside of the foot. Then they come over toward the big toe and at the last minute they twist off the big toe. Now, why would you do that?

Well, the big toe isn’t moving. So if the big toe doesn’t move and it doesn’t bend up the way it’s supposed to so that all the toes can come up symmetrically, it stays straight. Instead you tilt away from the big toe to actually let the outside of the foot bend and let this long toe, which has become basically a lever that’s in the way, lets it stay rigid.

So the reason that I like to look at people’s dress shoes and try to assess that is they give that best indication because you can see scratch marks and wear patterns that don’t show up on running shoes. Now, many running shoes have EVA soles like Newtons and HOKAs have very soft rubber soles that start to wear out. So you can start to assess the wear pattern pretty easily, but they don’t show that same kind of twisting pattern because it doesn’t really scratch the way leather does.

If you see those things though, you see a big wear pattern on the outside of the heel, a big wear pattern with some just circular looking scuff marks under the ball of the foot. And in particular, a circular wear padding, right under the end of the big toe, that is 100% suggestive of hallux rigidus. So look at your shoes, see what you think and let me know whether or not you see something that looks like hallux rigidus in your shoes as well. 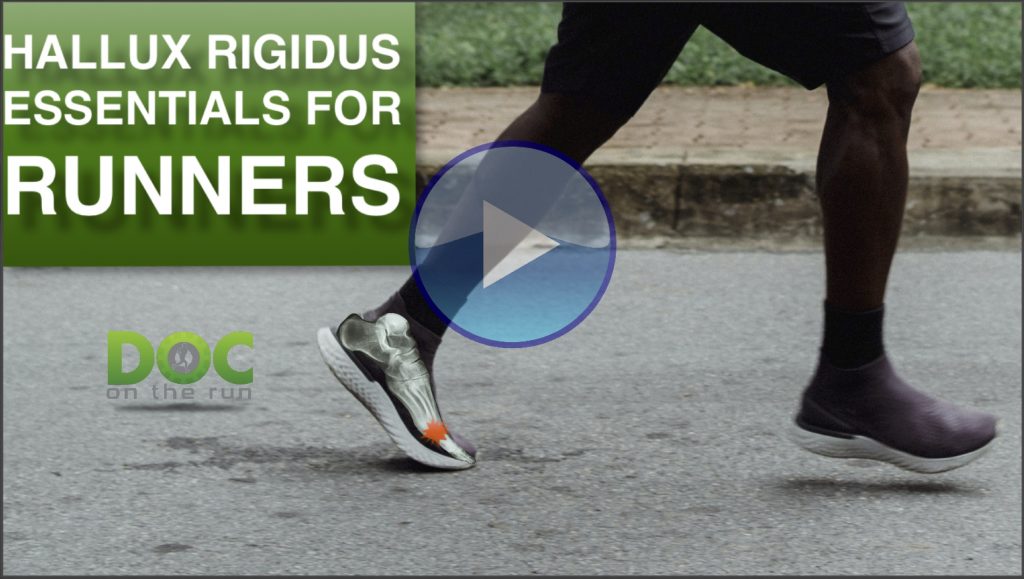