#488 Why healing fractures hurt after stopping the boot - DOC

#488 Why healing fractures hurt after stopping the boot

Today on the Doc On The Run podcast, we’re talking about why healing fractures hurt after you stop using the boot.

Today’s question actually comes from one of the discussions I was having in the Monday, Wednesday, Friday coaching group, where I answer people’s questions so that they can stay on track and make sure that they make those finite adjustments and increases of activity as they recover from injuries like stress fractures.

There are really three reasons why you could get pain when you’re transitioning out of the boot and into a normal shoe after you have a fracture and it appears to have been healing on x-rays and it looks like you’re doing better and you’re doing more activity but then it starts to ache. Of course, that can really freak you out because if you want to get back to running and you want to get back to training, the last thing you want to do is just start running on your foot if you think you might actually be making the injury worse, that would obviously not be helpful. So, the pain is something to obviously watch out for.

But as I’ve said before, the pain is the most accurate indicator of what you can do in terms of increasing or dialing back your activity levels as you continue to try to maintain your fitness through these injuries.

Now, the first reason that you can get pain as you transition out of the boot and into a shoe and start doing more, is that you can get soft tissue swelling. So the healing fracture actually has some measure of inflammation going on through the remodeling process and the continuing healing process as that metatarsal fracture heals. That is totally normal.

Now that soft tissue swelling causes pain. It actually stretches and distends the nerves in the skin and that can cause pain. That’s not really worrisome. It’s worrisome if it really has a lot of swelling, it’s worrisome if you have bruising, but it’s kind of normal to have some of that discomfort.

Fracture is partially healed but bone is weak – flexing – micromotion 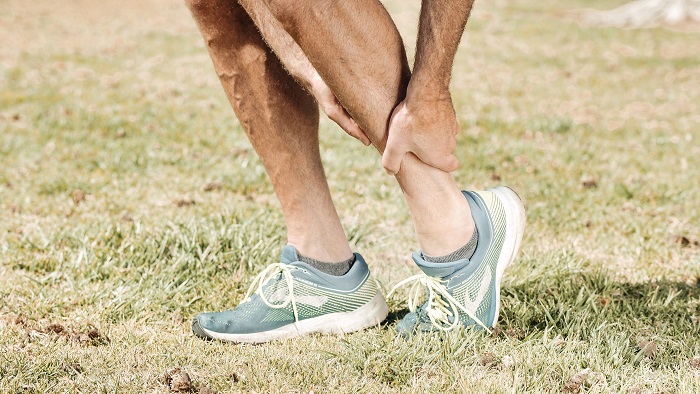 The second reason is that you can have a fracture that’s partially healed, but the bone is weak and basically flexing or developing what we call micro motion. Now, if you think about this, you have a fracture, the bone breaks, there’s a crack in the bone, you get some callous that forms between the bones that’s like some glue holding it together.

Then you get some collagen fibers in there that are like the fibrous strands that are in duct tape that make duct tape stronger and it holds it still better. And then eventually you start getting calcification of that area where it actually holds it still. But early on in that process, even if you have some calcification in the healing fracture area in your foot, well, that metatarsal can still be pretty weak. And so when you step on it, you’re basically flexing and bending it.

Now that stress applied to the bone actually does stimulate more bone formation and it actually heals it a little bit faster if you’re doing that, and that’s the thing that we refer to as micro motion. For example, if we do a reconstructive surgery on you and we put a big external fixator frame with the big rings around your leg and the wires going all through the bones attached to the ring to hold it still, it’s very common and it’s basically typical for the physician or the surgeon to actually loosen the bolts and the nuts that hold those frames stable once you started healing a little bit to actually allow micro motion to stimulate it to heal faster.

That’s normal, but that flexing of the healing bone can make it painful. The point is that you have to report that to your doctor and you also have to watch and see if that’s becoming problematic or going to flex it so much that it basically re-breaks the healing area. You obviously would not want that.

Fracture is not healed and is moving

The third reason of course, is what we all worry about and that is that the fracture is not yet healed enough to withstand the activity that you’re applying to it and the fracture fragments are moving independently of each other.

A micro motion is not really where the pieces are moving independently. They’re actually flexing and stressing and straining the bone in a way that stimulates more bone formation that’s healthy. But if you have two broken pieces of bone and they’re basically wiggling like a hinge, that is not a good thing, that basically is going to prevent the healing of the bone from actually taking place and make it more possible that you’re going to develop something called a delayed union, where it takes a long time to heal or a non-union where it doesn’t actually heal at all.

So the last thing that you want after you’ve gone from crutches to a boot and you’re starting to transition is to turn this partially healed bone into a non-healing bone. That would be a disaster. So, it’s not just the pain, it’s not just the imaging, it’s your story and the way all of these things feel that help your doctor figure out where you really are in that continuum.

That’s why I also think it’s helpful to do more frequent follow up like on Monday, Wednesday, and Friday for a month, instead of just once or twice a month and if you can have more frequent follow up with your doctor, that will also help you determine whether or not you need to dial your activity way back or just a little bit or not at all.

These three things that you think about, just think about what’s going on with your case and then make sure you discuss it with your doctor or get a second opinion. But those are really the three reasons that fractures can start to hurt after you transition out of a fracture walking boot.