#479 What happens if I run before my broken toe heals? - DOC

#479 What happens if I run before my broken toe heals?

Today on the Doc On The Run Podcast, we’re talking about what happens if you run on a fractured big toe before it completely heals.

This is a great question that actually came from one of the discussions I have with runners who are in the recovering runners coaching group, where they sign up for a month of access to have all their questions answered every Monday, Wednesday, and Friday.

This is someone that had just broken her toe and during this webcam call, we were talking about it because it really hurt. She could barely walk on it, but she was really worried that she was going to have to use a fracture walking boot for a month or month and a half. And she was really worried that she wouldn’t be able to run for like six to eight weeks. So she wanted to know specifically when she could start running, not surprisingly.

The first thing is, if you have a fracture where the toe is displaced or moved out of position, you have to do something to put it back in position and hold it there, so it will heal and not wind up being a crooked toe permanently. 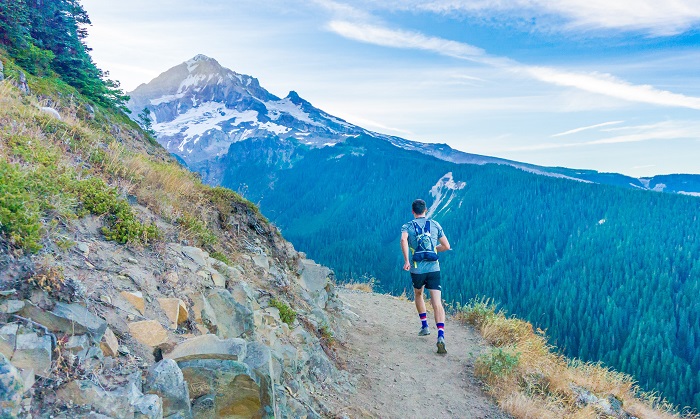 The second thing is that you want to avoid this condition that we call Sausage Toe and that actually is the name of the condition. When you get it, your little toes are to look like a Vienna sausage and what happens is that if you have a toe that’s injured, whether it’s a bone contusion, a joint capsule or ligament injury, that kind of feels like a broken toe or an actual cracked bone that is a broken toe. It can swell. And when it swells a lot, it will actually start to develop scar tissue or a fibrosis within that swollen area that becomes permanently thicker tissue. That’s how you actually get sausage toe.

So if you have a broken toe and it’s really swollen and you run on it because you think it doesn’t hurt that much, and it couldn’t really be a big deal because it’s just a little toe. Well, it can swell and become permanent swelling that turns into this thing called sausage toe. Then when you’re training for long events, you’re much more likely to get other problems because the toe is just bigger, you get blisters and soreness and all kinds of other problems that are totally avoidable. So you do not want to run on the toe if it’s definitely broken and moved out of position. You don’t want to run on it if it’s causing so much swelling that you could get sausage toe and you don’t want to wind up with a painful non-union.

Now so that’s the third problem is that if you run on a broken toe and you’re moving the fracture and it doesn’t ever heal, you can develop this thing called a non-union where the bone does not unite and doesn’t actually heal. Well, that’s not really that big of a deal in most little toes, because most of the time when you get a non-union, you get scar tissue that forms between the pieces of bone. So even though it may wiggle a little bit, it usually doesn’t hurt, but it could and if it does, then you have to have surgery to get it to heal, and you don’t want to do that.

You’ve got to make sure that you’re making the right progress and that’s not just based on a X-Ray. It’s based on your circumstances, how much it hurts and all that. So if you have that, make sure you get a second opinion from somebody who’s an expert, but in short, you don’t always have to wait for healing on an X-Ray to actually start to run. And that’s what I talk about in these coaching groups.

Most of the time, when I work with runners who have broken toes, I actually get them running long before you actually see the thing completely healed on X-Ray because when you’re a runner and you have a broken toe, you are in a race against time. You need the toe to heal, but you’re losing your fitness in an exponential rate, every single additional week that you take time off of running. So you’ve got to figure out the activities you can do that will maintain your running fitness and keep you strong and fit and stable and well-coordinated so that when you return to running, you don’t get a different over training injury. That’s really the key.