#468 Recovering after fracture should I ramp up running intensity today? - DOC

#468 Recovering after fracture should I ramp up running intensity today?

Today on the Doc on the Run Podcast, we’re talking about a recovering runner with a fracture who wants to ramp up his intensity today.

Before we get started in this episode, I just wanted to mention that I’ve created something for you that might be really helpful if you have this sort of concern right now. If you’ve been injured, no matter what it is, whether it’s a stress fracture, an Achilles tendon issue, cuboid syndrome, perinatal tendonitis, whatever, if you’re trying to get back to running, there are certain things that you should do in order if you really want to get better as quickly as possible.

Just earlier today, somebody called and she scheduled an appointment and she was going to have the appointment in a couple of days where we’re going to talk on webcam for about an hour. But I told her “If you really want to get the most out of this visit, you need to do some things right now before we even talk like tracking your pain.” And that’s part of what I talk about in the 12 steps presentation that I created for you. I’ll explain more at the end of the episode, but it’s free. You can get it, you can get it at docontherun.com/12steps.

Now today’s episode actually comes from a discussion that I had in one of the Monday, Wednesday, Friday coaching groups. And so every Monday, Wednesday, and Friday afternoon, I have a few people that actually come on and ask me very specific questions so that they can stay on track readjust and make sure they’re making the right decisions as they recover from those injuries and start getting their running fitness back. Now, you would think that that’s really simple, but it’s not, and every single Monday, Wednesday and Friday, I speak to athletes who sign up for this thing to basically talk for a whole month to make sure they’re making the right decisions. 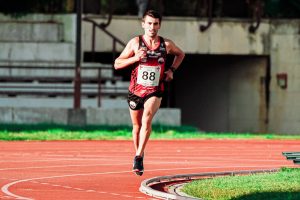 You would think it wouldn’t be a big deal, but you do have little concerns that are very valid and you have to make sure that you’re increasing your activity so that you can get back to running sooner instead of just sitting around and waiting. But the only way you can do that is with constant readjustment based on how you feel and what happens through that recovery process. Now, in this case, this is someone with a fracture who was told he couldn’t run. And after I did a consultation call with him, I actually cleared him to run.

But I said, “You’ve got to ramp up very, very carefully.” And so he had done his first run and he had gone out and ran for 20 minutes. And so he wanted to know then what he should do next., Like if he could run a little faster or a little harder or something like that. And part of what I explained was that it’s extremely important that when you’re actually going through this process, you’re basically pushing your limits of risk and you’re trying to not disrupt the healing that’s already happened. So when you begin running again, the first thing is to try to get as low stress as possible time under your belt.

So you do 20 minutes at really low risk, low pounding, low speed. You’re going really slow. And if you’re running on something like an anti-gravity treadmill, you want to dial the gravity way back because it’s the force of gravity. That is the most detrimental and the riskiest of all those three factors. So in his case, I said, “No.” But this is a temptation. You run for 20 minutes, nothing hurts. It feels good. All that does is tell you that it was okay to run it 20 minutes at the intensity and with the amount of force that you applied to the foot during that session.

When you do that, you’re weaker, you’re stiffer, you’ve lost your neuromuscular connections, your form’s terrible. And then you load things asymmetrically at higher peak forces that dramatically increases your risk of getting another over-training injury. And so you’ve got to get the time under your belt first. Start getting your fitness back, start getting your coordination back, getting those neuromuscular units firing in unison efficiently so that you can be stable and not wobble and put yourself at risk.

Then you start increasing your speed and last you increase the pounding. So if you’re on an anti-gravity treadmill, the last thing you increase is the pounding from gravity. So you’ve got to think about that. If you don’t have access to one of those treadmills, like the last thing you want to do is go do something that’s really going to beat you up, like running on hills or doing something that’s going to really strain your system. You’ve got to get your fitness back first.

That’s a lot about what we discuss in the 12 Steps to Recovering from a Running Injury.

You can get it for free. It’ll really explain in depth all of the things I do, the 12 steps I do with people that call me for consultations when they’re trying to get back from an over-training injury without losing all their fitness. Just go to docontherun.com/12steps, and you can get it there. I’ll see you in the training.