Today on the Doc on the Run podcast, we’re talking about a runner with Achilles tendon worries after taking Cipro antibiotics.

This episode actually comes from a question sent in from one of the podcast listeners. Courtney wrote in and she asked, “How long do I need to stop running or take it easy after taking five doses, meaning two and a half days, of Cipro? I told my doctor I was a runner, so I didn’t trust their opinion on when or how I should run. I haven’t run since finding out the side effects two weeks ago, and the Achilles feels weak and a little thicker than the other side.”

Okay. This is a great question. If you look up this stuff about Cipro, which is an antibiotic which is often prescribed for lots of different things, it can actually cause some trouble with the Achilles tendon. In fact, this is so well known that about 20 years ago, the FDA came out with a black box warning that is actually posted on the box of medication when you get it, that says there is actually an association with Achilles tendon ruptures. And this is a known correlation with taking the antibiotics, and so you have to be aware of it. 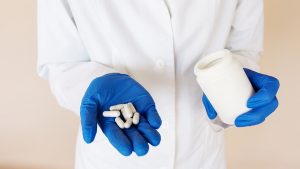 Now, believe it or not, that was known a lot longer before the FDA posted this black box warning. But when I was in residency, the FDA black box warning came out, and we were all kind of shocked. Of course, we had no idea, as many people don’t. And if you’re a runner and you’re given antibiotics, you always assume it’s safe. But that’s not always the case.

I’ll tell you a little story about my own sort of close call with Cipro. I was actually doing Ironman Florida one year, and on my time trial bike, I have one of those aero drink bottles with the huge straw sticking out of it between the handlebars so I can just keep hydrating the whole time I’m peddling. And what happened is I was actually taking a sip of my aero drink, which was filled with half water and half Gatorade, and I hit a bump.

When I hit that bump, the liquid that I was inhaling through the straw actually went into my lungs. And that’s not great, so I kind of choked and coughed a little bit down the course. It seemed fine. I actually had a good race. But then I actually got pneumonia because I had inhaled the liquid into my lungs and that caused what we call aspiration pneumonia.

Obviously, if you’re training for races like Ironman triathlons and marathons, it’s not really great to have pneumonia. So I was out of town and went to see a doctor at one of those urgent care clinics. I filled out all my paperwork and explained that I was training about 30 hours a week at the time and that I was actually going to continue to race. In fact, I had a marathon about two months away and then another Ironman about four months away. And after waiting and waiting and sitting around and getting moved from room to room as you usually do in those clinics, eventually I saw the doctor. He looked at my chest x-ray, he listened to my lungs, and he wrote me a prescription for Cipro.

Cipro is very commonly prescribed for everything from pneumonia to urinary tract infections, so it’s a very commonly prescribed medication. But again, there’s this black box warning, and I mentioned that to him. He was actually a little bit offended that I even brought it up, so I understand what Courtney is talking about here when she was a little hesitant to take the doctor’s opinion.

But I just said, “Look, you’ve got to be kidding. I’m training 30 hours a week and I’ve got another marathon. You really think I should take Cipro?” And he basically admitted that he didn’t really read all of my paperwork and that he didn’t really realize I was exercising so much. And so he gave me a prescription for something different, which would treat the pneumonia but not cause me to have such a concern about the Achilles tendon.

I will tell you that I see athletes with Achilles tendinopathy of varying degrees, people with tenosynovitis or people with tendonitis, people with paratenonitis, people with true tendinosis, and even people that rupture their Achilles tendons that have to be surgically repaired. I’ve done all that. Some of these athletes, of course, runners who have Achilles tendinopathy and don’t really understand why it began. They haven’t changed their training. They haven’t done something new. Oftentimes will relate that they did have something like a urinary tract infection or a respiratory infection that had to be treated with Cipro. And they also are completely unaware most of the time that this is a problem and could be a problem.

It can certainly happen. That’s part of what I talk about in the Achilles MasterClass. We talk about how those things happen and what you really need to understand if you’re an athlete who’s trying to run. But in answer to Courtney’s question, she says, “How long should I stop running or take it easy,” assuming that she’s continuing running, “after taking the five doses of Cipro?” Well, I wouldn’t tell you to just take it easy or how long it should be. When you have taken Cipro, and you clearly seem to relate a problem where you feel like one tendon feels weaker and it even feels thicker or different than the other tendon, that certainly implies something is going wrong. You cannot make these decisions.

I get these questions all the time where people will say, “I had a stress fracture. My doctor had me in a boot for seven weeks. Is it okay to run now?” I have no idea. I don’t know how bad it is. I don’t know how it’s improved over the course of that seven weeks. And I don’t know what’s going on. And so I can’t tell you it’s okay to run, particularly if your doctor says, “Don’t run.” So my first question would be whether or not Courtney actually asked the doctor, “Is it okay to run or not?” And if you don’t trust the doctor’s opinion, then you have to get a second opinion from somebody who is an expert on running injuries so that you can make a better decision, or at least one that you trust.

And I do understand. I wouldn’t trust the doctor either, and I didn’t trust that doctor that was trying to give me Cipro when I was getting ready to do another marathon and was ramping back up. That’s not really great advice, I don’t think. And so you can’t base the decision to run or not run when you have what you think is something wrong with the tendon just based on how long it’s been since you’ve taken the medication. So what I would do is ask the doctor or get a second opinion from a running expert to figure out what’s really going on, what’s wrong, how bad it is, before you make it any worse.

If you want to learn some more about Achilles tendon disorders and what you need to really understand to make sure you don’t make it worse and rupture it, check out the Achilles MasterClass. You can get it for free. It’s at docontherun.com/achillesmasterclass.

In this free video you will learn:

All of this will help you as a runner understand how to treat your Achilles better, no matter which stage of trouble. 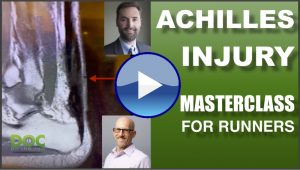