#464 Healing Running Injuries is a Race Against Time - DOC

#464 Healing Running Injuries is a Race Against Time

Today on the Doc On The Run Podcast, we’re talking about how healing running injuries is a race a against time.

I was just doing a second opinion consultation over webcam with a runner who had an injury. And she said that she was really worried that she was going to lose all of her fitness and that she didn’t want to just sit around forever. That’s a completely reasonable fear.

I was explaining this story to her where I said when my kid was little, my son was in preschool, I used to do letter flashcards with him, teach him simple words and stuff like that. Basically I was trying to teach him how to read before he started kindergarten.

One year, during this flashcard phase, I was doing Ironman, Texas. I was staying with my sister who also lives in Texas. She’s an elementary school nurse.

When she saw me doing all these flashcards with Alex, she said, “They are going to teach him how to read when he gets to school.” Basically, she was kind of making fun of me.

I said, “Yeah, I know that, but I think it’s going to be helpful.” Now the truth is, is that a child isn’t going to get dumber if you’re waiting for them to read when they start school. It’s okay to do that. But it’s not okay as a runner to just wait for weeks or months to actually heal something when you’re losing all of your fitness, because it takes a long time to build a big base of aerobic fitness, it takes a long time to develop the neuromuscular connections that make you coordinate it when you do long runs and speed workouts, and that stuff you’re losing at a very, very fast rate compared to how long it takes to build it up. So you can’t afford to lose all your running fitness. You just can’t. So it really is a race against time. 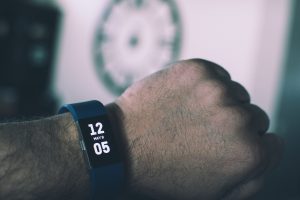 You’re basically trying to figure out how can you actually compress the healing as quickly as possible? How can you actually make sure that you’re taking advantage of the robust healing that actually happens in that initial first couple of weeks and not just sort of half do it? What I see runners do wrong when they’ve called me for a second opinion, because it’s been two or three months and they’re not better.

And they’re completely freaked out because their doctor said, “Well, we’ll give it another month.” They start panicking. And then they call me, and then we talk about what they’ve been doing. And many times I say, “Well, if you had been using crutches for just a few days, if you’d been using a fracture walking boot more consistently, if you’ve been doing these other things, initially, you’d probably be a whole lot better off.”

So if you have an injury, you want to remember that you really do have healing that can take place initially that you can’t do later at the same pace. So I think it’s really important to try to focus hard on really giving it the opportunity to heal initially, because that actually has an exponential payoff. You can actually do more later if you heal sooner. So you don’t want to play around with that. For somebody who’s not fit, who’s not an athlete, it actually doesn’t matter.

Think about it. If somebody has a stress fracture and they walk on it some with a surgical shoe instead of a boot, if they don’t use crutches initially, if they don’t use a bone stimulator, if they don’t do all these other things. So what? It’s inconvenient, they have to wear a funny looking shoe or a boot or something, but in the end, their life is no different. They weren’t doing anything athletically before.

When they’re healed, even if it takes them three months of walking around and going to the grocery store and everything with this funny looking shoe, they could still go to the grocery store later and not have pain. If you take several months because you’re walking on it sooner than you should, and you’re not really protecting it, you’re not really doing everything to optimize your healing, it is going to take longer.

That long period of time that you’re off of running is what’s really detrimental. So you’ve got to compress that period as much as possible so that you can maintain your fitness and get back to running as quickly as possible. Don’t ever forget that.

Now, right now, if you stop training, you’re getting weaker. No matter how much I know, and no matter how much you learn, nothing will change unless you take the steps to change course. So check out the 12 Steps to Recovering From a Running Injury. It’s a doc on run.com/12steps. Go get it and check it out. I’ll see you there.