#463 Do I need a bone stimulator for a Grade 5 Stress Fracture?

Do I need a bone stimulator for a grade five stress fracture? That’s what we’re talking about today on the Doc On The Run podcast.

I just did a second opinion consultation with a runner who called and said that she was diagnosed with a grade five stress fracture and the doctor didn’t actually explain what that meant to her in great detail. She just said it was serious and that she had to really think about it because of all the grades. Stress fracture are rates by severity with grade one through a grade five. Grade five is obviously the worst.

You can keep running, training just the same, and that’s a normal thing that happens in training. You can get a stress response. It’s not pathologic. 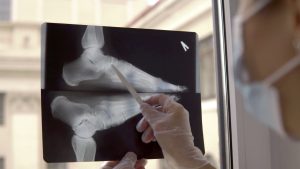 Grade two stress fracture is where you actually have pain and it’s a stress reaction. That thing is pathologic and it is a problem that will get worse if you ignore it.

A grade four stress fracture is where you not only have a crack but it’s moved out of position a little bit. So that obviously is worse. A grade five is no longer actually a stress fracture. It’s turned into something else that we call a fracture non-union. Non-union means the pieces did not unite. They did not get back together.

It’s not healing anymore. So something has changed and it depends on where you are in that continuum. But many doctors will define a non-union as a fracture that hasn’t actually healed, still appears to be present on imaging like an x-ray that’s been there for 90 days or more. The longer it goes, the harder it is to get it to heal. Now, there is a chance that you can develop something called a non-painful non-union where you have so much scar tissue in between the pieces of bone that it’s actually so stable, almost as stable as bone, but it doesn’t hurt as all when you do anything. And if it doesn’t hurt when you move it, it’s not problem.

But you do not want to gamble and hope that you wind up with a stable non-painful non-union, you obviously would want to get the bone to heal. A bone stimulator is one way to do that. But what will happen, most of the times a doctor’s going to look at it, they will talk to you and you have to be honest with them.

If you’ve been walking on it, if you’ve been trying to work out, you’ve done stuff that is actually impeded your progress. The only change you might need is really stopping all of that stuff that you shouldn’t have been doing in the first place, but you’ve got to change something. So, sometimes they’ll recommend putting you in a cast to really hold it still. Sometimes you have to think about your nutrition if you have some kind of deficiency, thyroid deficiency or vitamin D deficiency.

You’ve got to change course if you want to change the course of the injury. And so if you have what is developing into a non-union, yes, many times I do recommend bone stimulators, but I can only recommend one or tell you that would make sense in your case if I’ve evaluated you, if we’ve done a second opinion, if I looked at your x-rays, if we talked about your foot, talked about your history, all that stuff, you just have to figure out what’s the best thing for you.

Many people think that a bone stimulator is the best thing just because it sounds new and fancy and it’s techno wizardry and they can be great. But also a lot of times just doing some simple stuff, like really assessing what you’ve been doing in the recovery so far and changing something in terms of that may be enough to actually make that shift from not healing to healing.

And that obviously is the goal if you want to get back to running as quickly as possible. So just be honest with your doctor and get a second opinion from an expert and figure out, do I really need to do this or do I not need to do it? What do I really need? Where’s the big progress going to be made and how can I get that progress so I can get back to running? That is what’s really most important.