#461 What is a Pseudo-Jones Fracture?

What is a pseudo-Jones fracture? Well, that’s what we’re talking about, today, on the Doc On The Run podcast.

This episode actually comes from a consultation I did with somebody who had a fracture in her foot. She rolled her ankle and actually broke the fifth metatarsal bone. The metatarsal is this bone here. The fifth metatarsal only goes out to your little toe. And if you break it, it could be one of three things. You could have a shaft fracture, which heals pretty uneventfully, most of the time. You could have an evulsion fracture, where it actually rips a piece of bone off when your peroneus brevis tendon tries to pull so hard to keep your foot under you, that it actually cracks the bone. Or you could get this thing called a Jones fracture. Now, if you have a Jones fracture, that is a bad thing. Out of those three, it is definitely the worst. But sometimes a doctor will say you have something called a pseudo-Jones fracture, which implies it’s kind of like a Jones fracture, but not really as bad.

There’s a lot of confusion around this. So, I actually have seen lots of doctors get this wrong. And in this case, what happened is this woman went to the urgent care clinic. The doctor looked at it, saw that there was a fracture on the x-ray, specifically, an avulsion fracture. An avulsion fracture is where the peroneus brevis attaches to this bump here. And when you roll your ankle, your peroneus brevis tendon fires to pull your foot back underneath it. It pulls hard enough that it’ll actually crack the bone right here. Now that’s what they saw on the x-rays at the urgent care clinic. There’s nothing wrong with that. She said, “Okay, here’s your surgical shoe. Put this on your foot. It’ll protect your foot. Take it easy. Don’t do anything dumb. Go see a specialist.”

Then she arranged a consult with me. I looked at her x-rays and I said, “Yes, you do have an avulsion fracture, but I see this weird shadow, that to me, truthfully, looks kind of like a Jones fracture.” And I said, “Look, I actually go to conferences and I teach doctors how to not miss these subtle injuries that can be misdiagnosed.” And I said, “This is not something you want to miss. So, maybe I’m paranoid. And I hope I am, but if I change the contrast and the saturation on your x-rays, it really does look like you might have a Jones fracture there. And we need to know, because that’ll change things. It’s much, much harder to heal. A Jones fracture has a very high rate of developing what we call a non-union. And that means the two pieces of bone did not unite. They don’t heal together. And if you get a non-union, then you have to have surgery after all that time off to try to put some hardware in there, like a screw, to stabilize the bone and compress it and get it to heal. So, better to know that right away, if that’s what you actually have.”

Long story short, we got a CT scan and sure enough, there it was, she had a Jones fracture. I saw it on her CT. I could tell that it was there. And then I actually called her radiologist. So, I called the radiologist who had not yet looked at it and said, “Hey, look, I just want you to look at this real quick, make sure that you agree with me that she actually does have this Jones fracture in her fifth metatarsal.” He looked at it and he said, “It’s a pseudo-Jones.” And I said, “What do you mean it’s a pseudo-Jones?” And he said, “Well, it’s a pseudo-Jones, because it extends into the articular surface.” And I said, “Okay, well, the articular surface is the joint.” And so, it’s true her fracture did extend into the joint, but then I actually prodded him more. And I said, “Okay, look, I want you to look at specifically at this one slice on her cellular views, because I think that’s actually a Jones fracture.” 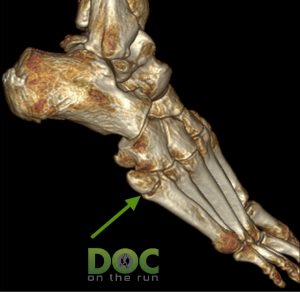 So, yes, she has a pseudo-Jones in addition to the avulsion fracture, but I think she also has a true Jones fracture where it actually is a fracture of the metaphyseal-diaphyseal junction. And that doesn’t really matter. It’s basically fancy word for this is the shaft of the bone, this is the base of the bone. They’re different kinds of bone. This is metaphyseal bone. That is diaphyseal bone. The details of that do not matter. That’s a bunch of medical speak between doctors, but if you have a fracture where those things intersect, the blood supply there is very poor. And if you’re going to develop a non-union, that’s where it’s going to happen. Sure enough, that’s what she had. So, in this case, even though the radiologist was trying to call it a pseudo-Jones, it was not. She did have a pseudo-Jones fracture, but she also had a true Jones fracture. And if we let her walk on that, it will probably not heal. So, if you’re a runner and a doctor says you have a pseudo-Jones fracture, you definitely want to find out for sure. Is that just means that they have an avulsion fracture that goes into the joint, which is probably going to heal without too much trouble, or could you have something more ominous, like a Jones fracture?

When in doubt, get a second opinion. And the radiologist also gives you a different opinion, but don’t rely just on that. We all make mistakes. Everybody makes mistakes. But if you have a couple of different doctors, two or three of them looking at the same thing, then you can usually avoid those mistakes. That’s one of the big keys.