I have a partially torn plantar fascia. Can I keep running and let it heal later? Well, that’s what we’re talking about today on the Doc On the Run Podcast.

The reason he could figure that out is he went through the self-diagnosis stuff and then he also realized that he had this really big episode of sharp pain, where it felt kind of like a nail in the fascia and it went on for a couple of days. Although he got it to calm down using the self treatments in The Runner’s Heel Pain course, he actually got way back on track, but it wasn’t a hundred percent better. And that really does imply somebody that has a partial tear in the plantar fascia.

Unfortunately, the treatment that I would normally do and normally recommend for somebody with a partial tear in the plantar fascia, he cannot do right now. He does not have time to actually take off of his activity and stop running completely right now. Now that happens. Sometimes that happens because you just qualified for the Ironman World Championships, and you’re about to go for the race. Sometimes it happens because you’re about to do the Boston Marathon. Sometimes it happens because you’re in training, like if you’re a fireman and you’re going through the physical fitness portion of their training, well, if you get a medical disability, you’re out forever.

Now, same thing with police officers, those who are in their training, people in the military who are in basic training or in the first part of their military career, they do not want to take time off to try to get something like this to heal if it means a medical disability or a discharge or missing a once in a lifetime race that they’ve worked hard to qualify for. So I understand it. 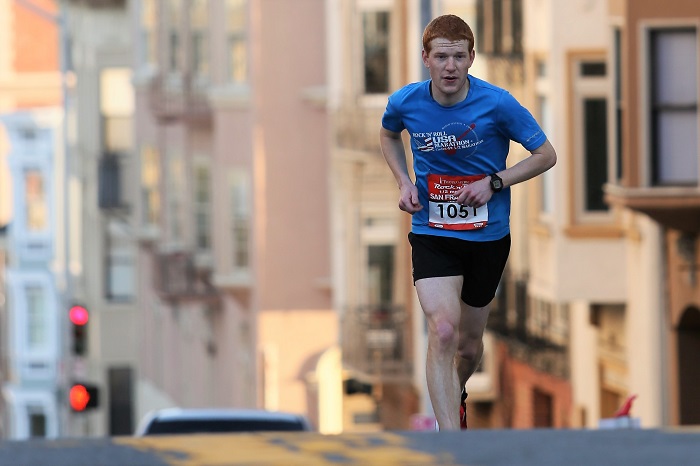 Here’s the good news and the bad news. The good news is is that if you run on a partial rupture of the plantar fascia, it can often heal later. That’s the short story. Now, before you do that, do not disregard the advice that was given to you by your doctor, and then go back later and tell your doctor, well, I listened to some podcasts and this guy told me I could run on it. I’m not telling you that. I’m telling you what I have done with some athletes that actually works.

There’s one guy in particular, I think about who was very smart. He was a very fast runner. He really understood all of this stuff. He had a background in biology, and so he really had looked into and understood completely all the physiology and everything at play when you have a partial tear in the plantar fascia.

Well, he thought he had plantar fasciitis. He saw a podiatrist. They injected him with corticosteroids. It felt much better. He trained hard. He qualified for Boston, but it actually, his heel pain got way worse. And what happened in retrospect was that, that corticosteroid injection weakened the collagen in the plantar fascia and he got a partial tear or a partial rupture of the plantar fascial ligament. So what did he do?

Well, I saw him, he was worried about this, but he was training for Boston again and he was about to go to a race and qualify. So, we talked about all the stuff he could do for plantar fasciitis, and assuming it was plantar fasciitis, what would work for that? We tried all those things and he didn’t really improve.

Same as this guy that I was just telling you about that had done The Runner’s Heel Pain course. He was getting much better, but it didn’t completely resolve. And I told him, I said, I think you probably have a partial rupture of the plantar fascia, even though you didn’t see any bruising, but it’s a very small tear, but you know, if you want to keep running on it and you’re actually tough enough to do that, go ahead. Long story short, he ran on it for three years.

It was torn and we didn’t actually conclusively arrive at that diagnosis until he actually stopped running because they canceled all the races due to the pandemic. So when that happened, he finally got an MRI, I went to see him. I looked at his foot, I looked at the MRI and I said, well, there you go. You do have a partial rupture of the plantar fascia. And it looks nasty. It’s really, really thick. It’s really, really inflamed. And it’s really degenerated because you’ve been running on it and you qualified for Boston three times while you had this partial tear that you continued to train on. And he said, okay, well, I’m ready to do the treatment now. I can sit down and I can take some time off. I can take it easier because there are no races anyway. So he did that and it completely healed.

Now he’s back to running. He does not have any more heel pain. And so in his case, definitely he was able to run, not only run, but run at a high level for a long period of time, three years to be exact. Then he did the treatments that I have always used for patients that have a partial rupture of the plantar fascia and he got better.

So the good news is, is that the plantar fascia is very resilient in terms of it actually being able to improve. Sometimes though because of the increased thickness, if you beat it up like that, it may actually still be thick and cause problems and discomfort just because it’s thicker. So you don’t want to just neglect it just because you think you might be able to get away with it, but it’s not like an Achilles tendon.

I would never in a million years tell somebody with an Achilles tendon issue to go run for three years and try to qualify for Boston every year because they’d probably rupture their Achilles tendon completely. And that would be a career changer in terms of your running ability, for sure.

But it’s an interesting question. It’s something to really think about. The main thing is to really decide what your goals are, how much it hurts, what you can put up with, what you can tolerate, and if it’s really in the cards for you to really treat it appropriately and just get it over with. That’s what you got to think about.