Today on the Doc On The Run podcast we’re talking about the top three reasons runners get black toenails after long runs and races.

This episode actually comes from a discussion that I had for a fitness segment in a television interview where I was actually asked about black toenails in runners. If you’ve been running for a long time, undoubtedly you’ve had this happen at least once. I mean, I’ve had it happen multiple times.

In fact, I realized, after many years of racing, that if I did any run that was longer than about 20 miles, if I did an Ironman, a marathon, or just a really, really long run, and I didn’t actually do some specific things to really provide care for my nails and protect them, well, I would wind up oftentimes getting one toenail, usually one of my second toes, that would get bruised, discolored and painful.

Sometimes, I wouldn’t really feel anything during the run, but then maybe the day after it would be a little bit sore if I just step on it wrong, or if I push it against the inside of a shoe, and it would be a little bit discolored, but not really bad, but within the next day or two, it would actually start to turn black. So we’re going to talk today about the three reasons why that really happens, and there are a couple of different reasons.

What you’re seeing when that happens, well, it’s a bruise under the nail. So you can hit it once with a hammer or you can hit it 10,000 times by tapping the inside of your shoe while you’re running, and the result is the same. You get microtrauma that basically causes leakage from the capillaries under the nail in the nail bed. And so what you’re getting effectively starts as a blister under the toenail itself, and then the fluid collects there.

If you have bleeding into that area, because you have some separation of the tissue and damage to the little capillaries in there, well then it starts to become discolored and it actually bleeds into that fluid underneath the nail plate, and it turns black or blue or discolored in some way that looks like a bruise under the nail. 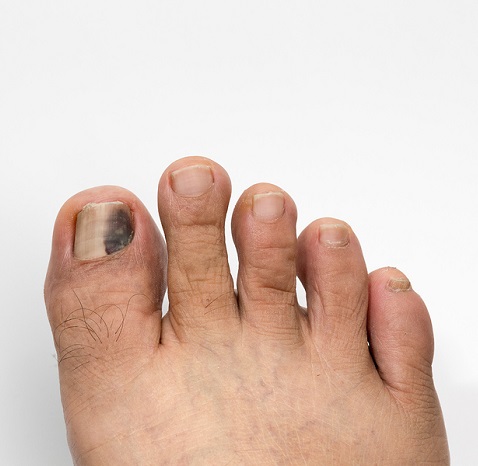 It can not just be unsightly, but it’s a real problem, because if that accumulates enough and you get enough pressure between the nail plate and the nail bed, well, it can actually lift the nail right off of the nail bed underneath and then you actually end up losing the toenail. Now, that’s a problem.

If you just have a bruise and it’s not separating the nail from the nail bed underneath, well, it could still take six months or a year for the nail to grow all the way out and pull that bruise outward to make it go away. And if you lose the nail, that’s even worse, because you then have a problem where you have to wait for the nail to grow in, the skin folds at the end of the toenail, at the edges where those little grooves are that your nail sits in, well, the skin can contract, and then you’re actually more prone to get problems like ingrown toenails later.

So you don’t want to have that happen, and that’s part of why I made that video for you that I mentioned, that shows you how to actually tape the nail to keep it in place, and I’ll tell you again at the end of the video. But there are really three reasons that you get this bruising and discoloration that we see as black toenails in runners.

Now, the first one is that your running shoes are just too tight. So if the shoes are too small, the nail’s pressed against the inside of the shoe. It gets aggravated, it gets irritated, you’re bumping it all the time, and that can cause the bruising underneath the nail.

The second reason, believe it or not, is if your shoes are too big. If they’re too loose, if you don’t actually lace them up tight enough and your feet are sliding when your foot hits the ground, well then basically your shoe hits the ground, the shoe stops, your foot slides forward ever so slightly, and you can whack the inside of the shoe then as well. So it doesn’t really make sense to most people, but it can either be because they’re too tight or they’re too loose.

And so if you’re sure that you have enough room in the end of the shoe, then you want to try to lace them a little bit more to make sure that they’re snug and that your feet are not actually sliding, so that your toes are contacting the inside of the toe box when you slide forward when you stop, every time your foot hits the ground.

Nails not sliding into the end of the shoe

The next reason is that your nails are not actually sliding into the end of the shoe, but they’re actually pulling upward. And as your toes pull upward, when you’re in what we call a swing phase of gait where your foot is off the ground and your leg’s sliding through the air and swinging from behind you to in front of you to get ready to land on the ground again, well, your toes actually pull upward and fire the extensor tendons to make that upward move.

If your nails are actually bumping against the inside of the toe box. So if you’re looking down at your shoes, what you see is the material on the top of the toe box, right over the toes and so you’re actually sort of scraping the toenails very slightly against that material on the inside of the shoe. A lot of the running shoes that are mesh or very breathable, that material actually is kind of abrasive and it has a lot of friction potential. And so, that’s one of the things that it can actually cause the most irritation.

What I see most of the time in runners, it’s not that their shoes are too loose, it’s not that they didn’t lace them appropriately, and it’s not that they’re too small. It’s that the nails are actually hitting the inside of the shoe as they swing through. That can be one of those things you’ve really got to check for. So if you’re looking at your shoes and you’re getting black toenails, you’re trying to figure out what the problem is, check the size.

Another trick is to actually pull the insert out of the shoe and then look at the imprint that your toes have left on the insert inside the shoe. Obviously, if it’s the very edge, the end of the shoe insert, then you know that they’re actually a little bit too small for you, even if they actually feel okay.

If those are not issues, then it may be this issue where you’re swinging through and you’re actually scraping the nails against the inside of the shoe and cutting them short can actually be one of the simplest things to make that a little bit less of a problem.

So those are some things to think about, but there are really good reasons that people get black toenails, but black toenails are not good. They can lead to a number of different problems and you want to make sure you don’t wind up losing the nail, because again, if you get that bruise under the nail and it lifts the nail plate all the way off the nail bed, by that fluid accumulating under there, it turns into a real problem.

One of the best ways to avoid that, after you injure the nail, is to do some first aid, to ice it, compress it. If you notice that they’re sore after your marathon, for example, if you go home and you actually ice it, and then you apply some compression, like taping the toe with a particular technique that I’m going to show you in this video, then you’ll be able to do that.

So if you want to see the video on how to tape the nail so that it doesn’t irritate it, and it does actually provide a little bit of stability to the nail, a little bit of compression of the nail, just to give it a chance to actually resorb that fluid and not let it push the nail plate off of the nail bed, well, you can go check it out. It’s free, and you can get it at docontherun.com/toenailtaping. So go check it out and I’ll see you in the training. 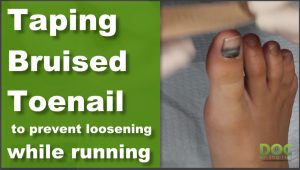