#431 Can a bone stimulator help a stress fracture? - DOC

#431 Can a bone stimulator help a stress fracture?

Can a bone stimulator help a stress fracture? Well, that’s what we’re talking about today on the Doc On The Run podcast.

Today’s episode actually comes from a question that was posed during the Q&A, the live question and answer session that I did recently for some members of the courses.

I have a great question from somebody who is enrolled in the metatarsal stress fracture course and wanted to know whether or not a bone stimulator would really be helpful. So, I thought that I would share that with you here as an episode of the Doc On The Run podcast. Let’s check it out.

We’ve got another question here on the Q&A. This is a good one. This is one wanting to know whether or not a bone stimulator would be helpful with a stress fracture. Well, that depends. The short story is this. A bone stimulator is a thing that uses either ultrasound or electromagnetic radiation to stimulate the cells in the bone that actually lay down new bone to actually lay down bone faster. 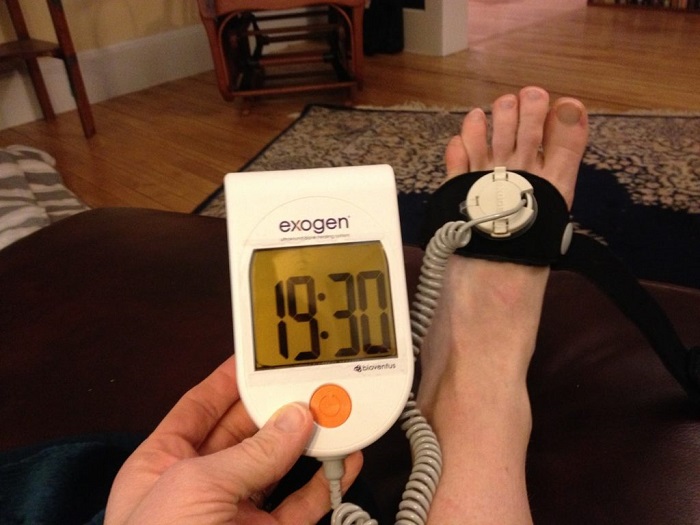 It’s a long story with biophysiology that we won’t get into, but basically when you have negative potentials in the bone, it actually causes the bones to develop faster or heal faster in that repair process.

Bone stimulators are something that are often recommended when you get what is called a delayed union or a non-union. That just means that the bone should have healed, but for some reason, it’s lagging. It’s not really healing quickly or appropriately.

Bone stimulators, generally speaking, are pretty expensive. Most of the time, insurance companies, HMOs, they will not give you a bone stimulator unless you have drifted into that delayed healing status of where they’ve actually diagnosed you with a delayed union or a non-union of that fracture.

Now, a lot of runners use these, and a lot of doctors, including myself, have recommended them for runners when they have stress fractures that they need to improve quickly. I had one runner, this case is not typical, this is not likely to be your experience, so do not take this as what is normal with bone stimulators, but one of the most impressive cases I had, again, not normal, so warning, don’t think that this is going to be the typical course, this guy had a through fracture, not just a stress fracture, it was cracked all the way through, and I gave him a bone stimulator, put him on crutches, so he was not on it at all, then something changed and he was going to have to leave San Francisco and go back overseas for a period of time.

We got an x-ray, and it was completely healed, not moving in the right direction, it was healed. It was solid. In that case, he was actually done with the crutches. I told him to transition off the boot. We worked through how to do that, the same way that I showed you in the metatarsal stress fracture course, how to safely transition at a stepwise fashion off of the crutches and then out of the boot. That was it. So, that thing completely healed him in two weeks.

Now, again, this is not typical, so your results may vary, so on and so forth, all of the general warnings. So, then this is not what you should necessarily expect, but I was impressed, and so was he. If you have a bone stimulator and it actually reduces a lot of that time that you’re in a fracture walking boot, or if it reduces the time that you’re on crutches, then obviously that would be helpful to you as a runner who’s trying to maintain your running fitness and then get back to running as quickly as possible. That’s the issue.

So, you’ve got to talk to your doctor, see whether or not your doctor thinks it’s appropriate for you. If you’re in California, in Texas, and you do a telemedicine visit, that’s one of the things we could talk about, but it just depends on your specific scenario, what kind of fracture you have, to figure out whether or not it would really be beneficial for you or not. That is a great question.