Today on Doc On The Run Podcast, we’re talking about how you have to slow down if you want to speed up.

I was just having a discussion with a runner during a telemedicine visit and we were talking about the things that she could do to actually accelerate her recovery from a running injury. And she was trying to figure out what activities she’d been doing and she’d been kind of yo-yoing through this cycle where she does some workouts, she does some short runs and then she feels good. And then she does a little bit too much and she backs up because she keeps getting re-injured and aggravating the injury over and over and over and the real situation here is that she’s just pushing her recovery too fast.

If you think about the way that you train we do periodization in training where you don’t do this linear ramping up of activity but unfortunately that’s what I see people do when they’re recovering from running injuries. You’re strong. You’re healthy. Then you get injured and you start to lose all your fitness but your brain still thinks you’re super strong is still super healthy and ready to run long distances even if you’re not really ready. 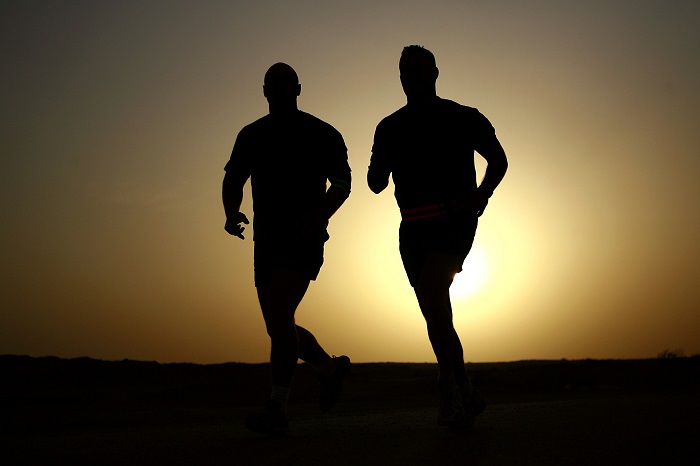 So if you follow the unfortunate standard routine of just taking time off of running for weeks you’ve really lost a lot of fitness. You’re weaker. You’re stiffer. You’ve lost your neuromuscular connections and when you go back to running that actually puts you in a bad situation because not only are you weaker because of your poor form and your poor coordination, you’re actually likely to load things at higher peak forces and load them asymmetrically in ways that kind of tweak them a little bit more and then that can cause a reinjury.

I don’t understand why it’s such a tough concept for runners to get when they’re injured but nobody would sign up for a marathon and then just go run day after day after day increasing their mileage every single day without backing back down to have a rest period. So some people build that in every week where you have a very specific rest day. Some people build in periodization where you have week after week you’re getting stronger and stronger but then every few weeks you actually drop down, you reduce your training load and as a consequence, you actually fully recover.

Then you’re able to train a lot harder in the next block as you accelerate upward again. And a lot of times, runners is that we’re recovering, you start doing activity, you go to the gym, you do some core work. You start walking on a treadmill, you run on an anti-gravity treadmill, you’re doing lots of cycling, you’re doing something but then you just start to ramp up in a linear fashion and not with any kind of periodization that gives you an actual time to rest. So remember you don’t get stronger when you run, you get stronger when you rest after you run.

The same is true when you’re recovering, you have to push the limits if you really want to get back to running as quickly as possible. But you also have to make sure that you’re slowing down in between those sessions so that you really can recover fully so you don’t develop another over-training injury. That’s really the crucial piec