#423 Does calcaneal fat pad atrophy cause pain when running? - DOC

#423 Does calcaneal fat pad atrophy cause pain when running?

Does calcaneal fat pad atrophy cause pain when running? Well, that’s what we’re talking about today on the Doc On The Run Podcast.

Today’s episode comes from a question that I got during a telemedicine second opinion consultation with a runner over webcam. He was worried that he had some fat pad atrophy in his foot and was getting heel pain as a consequence of that. The fat pad on your foot, of course, is on the bottom of the heel and you have cushioning down here and so if you get a loss of the cushioning on the bottom of your foot, well, that can create a real problem because when you do get that cushioning dissipating, then there’s not so much cushion between the ground and the heel. That leaves the skin in between a rock and a hard place.

So the fat pad atrophying in itself does not cause pain, but since the plantar calcaneal fat pad that cushions your skin under the heel bone really does prevent the skin from getting squished. Well, yes, you can definitely get pain if your fat pad gets atrophied.

So how does that happen? Well, there are really a couple of ways that that does happen. The first is it’s a consequence of aging. I heard a patient one time say that as you get older, you lose fat where you need it and you get fat where you don’t want it and that’s probably true. 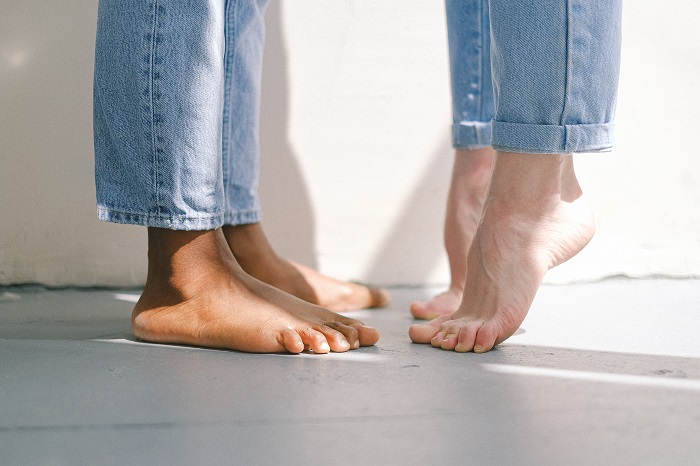 The fat pad on the bottom of the foot is one of those places that can over time, just naturally thin out and atrophy and get a bit thinner and a bit less cushion. When that happens, you can start feeling more pressure, more tenderness, more pain underneath the heel bone. But very few people I think get atrophy as a natural process that really does put you at risk of developing heel pain when you’re running. It’s much more likely to occur as a consequence of an injection. Specifically, a corticosteroid injection.

Now, before you start sending me a gazillion emails asking me if your doctor committed malpractice by doing a heel spur injection for your plantar fasciitis when you’re a runner, the answer is no. So let me be clear about that. I do not think that is malpractice at all. It is not a common thing that happens. It is a risk that can happen, but getting fat pad atrophy is what we call an unintended consequence. It’s something that is not necessarily good, but the doctor certainly didn’t know that it was going to happen, or it could predict that it’s going to happen. If you get it, it’s unfortunate, but it’s not malpractice.

But I will tell you one quick interesting story about a woman who had the worst case I had ever seen. Now, this was her fault. It was not the doctor’s fault. I was new in practice and had opened an office and she came in and had this complaint of severe heel pain.

Well, what she did was over the course of several years, she got plantar fasciitis. She went to see a doctor. The doctor said, “You need to do these stretches and if you have a lot of pain now, we can inject it with a cortisone injection and that will make your pain dissipate while you’re doing this other treatment of doing the stretches and stuff.” He injected her, she felt better.

She felt better right away. Within a few days, her heel pain was basically gone. She didn’t do anything else. She did none of the stretches. She did none of the other stuff the doctor told her to do. And then surprise, surprise, because she did not do the other stuff which is part of her treatment plan, the pain came back. And then what happened? Well, she went back to see the doctor and she said, “My heel hurts again. Can you inject it again?” And he said, “No, no, no. You don’t want to inject that over and over and over because the corticosteroid in there in the cortisone injection could reduce the thickness of the fat pad causing atrophy of the fat pad and that could be a problem.” So she got upset about that. She left the office and went to meet with podiatrist number two.

When she called, she said, “I have this heel pain and I want to see the doctor.” She went in and she pretended like it was her first visit. She did not explain that she had already had a cortisone injection. She got another cortisone injection. Long story short, she did that nine different times. And over the course of nine consecutive corticosteroid injections, every several weeks, she got significant fat pad atrophy.

She was asking me then if I would inject it and I said, “Absolutely not. You have a much bigger problem now.” And then she disclosed that she had done this really, really, really foolish thing. So now she was really in a bad spot and has no cushion under her heel and is going to have to rely on some very fancy inserts to keep the pressure off of the heel.

But you can’t really get the fat to grow back necessarily. So it’s not a good problem. You don’t want to really have corticosteroid injections unless your doctor really recommends that it’s necessary for you for that particular reason. So in short, you don’t get pain from the atrophy, but you do get pain from squishing the skin once the fat pad does get atrophied and you start putting more pressure on the skin under the bottom of the heel. That can definitely happen.