Does running really make me nicer? Well, if you’re anything like me, it probably does. That’s what we’re talking about today on the Doc On The Run podcast.

Does running really make me nicer? Well, that’s a great question, and this comes from one of the people I was just working with on a telemedicine visit for a second opinion for running injury. She actually said, “It’s been really tough being injured, because it seems like when I can’t run, I’m not nearly as nice as I usually am.” Well, if it were me, that’d be a nice way of putting it.

I mean, my dog could tell if I haven’t run for three days. So my kids know, everybody around me knows if I have not been running because running does something for me. We oftentimes think about this effect of running about how we feel better, we feel more at ease, less anxious, more content.

All of those things is often being attributable to the runner’s high and the endorphins that you get when you’re running, doing intense workouts. Well, the first thing is there’s some really interesting research on this. Just as a disclaimer, podiatrist, a sports medicine podiatrist that treat foot and ankle injuries. I am not an endocrinologist, or a psychologist, or anything else. But there is some really interesting stuff you might want to look up and read about regarding endorphins, and these molecules that are actually responsible for the way that we feel when we run. 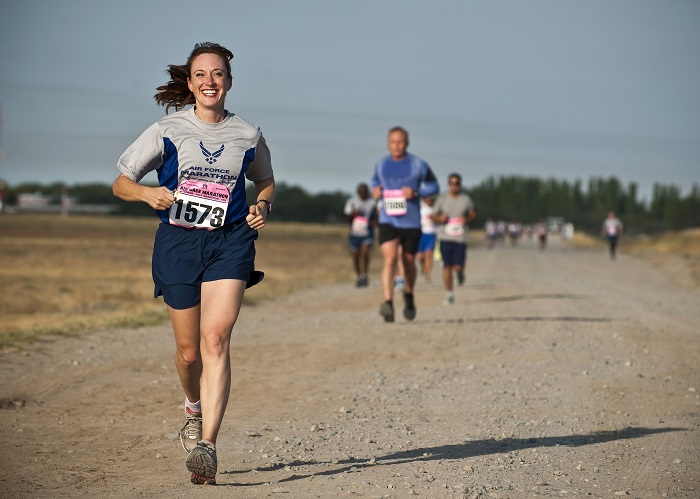 Now, the first thing is that endorphins, those are short-term pain killers. So when we get endorphins, we think that that causes the runner’s high, but there’s a good chance based on some research that that’s not really the case. The endorphins really just dull the pain sensation that can be associated with really intense exercise. That’s short lasting. It’s somehow euphoric, but it helps your muscles not feel pain so much.

Now, there are some other chemicals that are actually not from the runner’s high, but I think a lot of people think of it as runner’s high. It’s sort of like afterward, you do an intense workout and you just feel way more relaxed, way more at ease. These are biochemicals and substances that we call endocannabinoids. They’re actually associated chemically somehow with those chemicals in cannabis, which is where the name cannabinoids comes from.

Those chemicals though are actually what scientists and researchers have decided might be responsible for this relaxed state or sense of wellbeing after we exercise, because those actually cross the blood-brain barrier. You have a barrier between your bloodstream and your brain. So if you look around your brain and around your spinal column, you have spinal fluid that, the cerebral spinal fluid that actually obeys your brain and your spine, but it is not the same stuff that’s in your bloodstream.

Some molecules cross that barrier and some do not. So we know that you can get a bacterial infection, it can be in your bloodstream. But it may not affect your brain or your spinal column because it doesn’t cross the blood-brain barrier. There are lots of chemicals that will and will not cross the blood-brain barrier. Well, endorphins are one of those that don’t cross the barrier, which is why people think that this may not be responsible for that post run feeling. So when it comes to being nicer, well, when we run and we feel more content, less anxious, less stressed, and sort of better sense of wellbeing. That’s more likely to be from those endocannabinoids that actually do get produced as a consequence of aerobic exercise.

Now, in addition, there’s some additional research that shows, that in addition to having these chemicals that are effectively neuromodulators, that can make you feel better with consistent aerobic exercise, that you also do get increased blood flow that can develop as a consequence of that exercise in your brain. So when you read some of these things about how exercises reported to make you think more clearly, if you do consistent aerobic exercise, there actually is some scientific basis for that. It turns out it might make you nicer as well.

So if you’re injured, your number one task is to figure out what you need to do to get back to running consistently, getting aerobic exercise consistently. So you can be a little bit less of a jerk and a lot better patient, and a lot more patient with those around you. So make sure you get over that overtraining injury, get back to running so you can start being nicer again.