#401 Why wonky is better than weak in a recovering runner

Today on the Doc On The Run Podcast, we’re talking about why wonky is better than weak in a recovering runner.

I was just doing a telemedicine consult with a runner for a second opinion and he has so much pain in his foot he actually can’t even walk on the foot, much less run on it and he had a question about what to do. And I just said, “Look, right now, you’ve been weeks without exercising so your main task right now is actually to figure out what you can do to strengthen everything else.”

One of the questions I asked him was whether or not he was doing single leg squats to try to maintain some of the strength in his non-injured foot. And he actually said he wasn’t doing any of that because he didn’t want to get wonky. He didn’t want to be unbalanced. He didn’t want to have any asymmetric development such that one leg might be a whole lot stronger than the other leg. 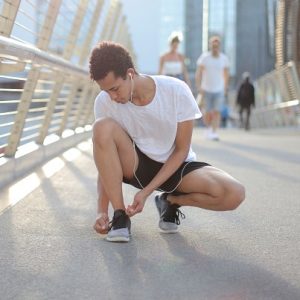 What I was explaining to him during this call was the concept of, first of all, that you can get strength in one leg when you’re not exercising it. There’s some studies that actually show that you can actually maintain some muscle mass and fitness in one leg when you’re exercising the other one a lot while you’re injured. But I said, “Okay, let’s forget about that, and let’s just assume that’s not even possible or that, that doesn’t really work.”

When you limp what you really do is you just spend more time on that non-injured foot, and if you’re doing this and that leg is actually a lot stronger, it’s able to take that abuse and absorb that additional stress a lot better without risk of further injury to your non-injured leg. And so, in that respect, I was just saying, “Look, it’s a lot better to be wonky than it is to be weak if you’re a recovering runner.”

So you need to think about this if you’re injured. If you’ve got one foot, one extremity, that’s actually injured and you’re trying to figure out how to maintain your fitness, don’t be afraid to strengthen everything else, because really you’ve got one injured part that needs to recover, so the strategy is actually to figure out everything you can do to strengthen everything else so that when you do get back to running, you actually have the lowest risk possible of getting re-injured. That really is the key if you want to get back to running and training as quickly as possible.