Today on the Doc On The Run podcast, we’re talking about a runner who said that he thought he had a bunion, but his big toe was straight.

A bunion deformity is a really common problem, and a bunion is when your big toe moves over and starts pushing against the second toe. Over time that can get bad enough that the big toe actually sits on top or underneath the second toe. Now when that happens, because the big toe is drifting over, the first metatarsal bone in your foot starts to drift inward or medially and so that means that if you’re looking down at your foot, the big toe on your left foot is drifting away from your right foot. And the metatarsal bone in your foot is actually drifting toward your right foot and that left metatarsal bone kind of bulges out and forms a big bump on the inside of your foot or medial side of your foot that we call a bunion.

Now because this thing is so common, whenever you get a bump of any kind around that area, people often think that they have bunions, and that’s exactly what happened with this runner when I did his second opinion consultation. We were looking at his foot and he was concerned that he had a bunion, and it wasn’t a bunion at all. It was actually this condition that’s biomechanically speaking, the exact opposite of a bunion. He has a condition called hallux rigidus.

Now hallux is just the medical term for the big toe, and hallux rigidus means that it’s rigid. And that’s sort of the end stage of this condition, where the joint gets so arthritic and jammed up that it really doesn’t bend upward at all. And there’s a precursor to this that we call hallux limitus, and hallux limitus is where you have a limitation in the range of motion of the big toe joint. So it’s limited, which as the name implies. But hallux valgus is actually a bunion deformity. And so the medical term hallux valgus means that the big toe is drifting over and rotating slightly.

So just because someone casually looks at your foot and notices a bump and tells you that they think you might have a bunion deformity developing, well, if the big toe isn’t moving and it’s not drifting over toward the second toe, then it’s probably not a bunion at all. But you’ve got to understand what the condition is to make sure that you’re getting the right treatment if you really want to keep running.

If you are a runner with an occasional aching pain in your big toe joint, you may have been told you have this condition called hallux limits or hallux rigidus. I will let you in on a little secret…I have hallux limitus, and I run…a LOT! And I am betting you can, too. So what I have created for you is a video called Hallux Rigidus Essentials for Runners. Its at the bottom of the show notes page for this episode.

In this free video you will learn:

I don’t think hallux limitus has to limit your running and don’t like it when doctors put limits on us. So, to make the video easier to find, you can go to docontherun.com/NoLimitUs Go get it now! 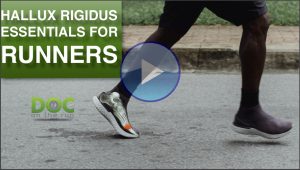