#358 What is snowboarders fracture? - DOC

#358 What is snowboarders fracture?

Today on the Doc On The Run Podcast we’re talking about what a snowboarders fracture really is, and why runners need to know about them.

In this episode, we’re talking about snowboarder’s fractures. You do not have to be snowboarding to get one of these things. Now, a snowboarder’s fracture is actually a break, or a fracture, in the talus bone, which is the bone that sits underneath your ankle, beneath your tibia, and on top of your heel bone, or the calcaneus. The talus is bone is an interesting bone. It’s a really funny shape. It’s got almost all the surfaces are covered with cartilage. It’s in your subtalar joint, on the bottom. On the top, it sits in your ankle joint. Then, on the sides it’s also in the ankle joint, with the tibia and fibula, and then the front of it, is actually sitting in the talonavicular joint. The whole thing is really complicated. It manipulates the talonavicular joint, the ankle joint, and the subtalar joint when it moves.

Now, the talus has this little thing on the side, this little pointy part here, called the lateral process. The lateral process points outward toward the outside of your ankle, and it can be injured a number of different ways. Now, this was popularized maybe about 20 years ago or so, where it started to be termed a snowboarder’s fracture. 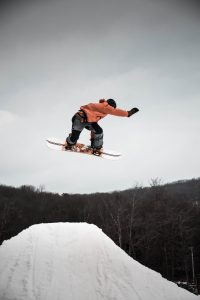 At the time, we were told that they were very rare, maybe I think it was 0.9% of ankle injuries when somebody has an ankle sprain, or something like that, actually sustain this injury called a snowboarder’s fracture. There was this premise put forward that it really happens only to snowboarders because of the way that you’re strapped into the snowboarding boots, and the way that you lean and all this stuff. When you actually load it the wrong way, you can actually crack the lateral process of the talus, and then develop a snowboarder’s fracture.

I actually did my surgical residency training at the University of Utah, and there are lots of ski resorts around Salt Lake City, Utah. There are several. There are lots of places where you can go snowboarding, and lots of people come to the University hospitals and clinics for ankle injuries in the winter time. People slip and fall on the ice, people get injured snowboarding, people slip and fall running. I actually trained for a marathon in the winter in Salt Lake City, so I would go run on the ice and the snow all the time. Very frequently, we would see people who come into the clinics who have these things called snowboarders fractures.

They can be very difficult to diagnose. Part of it, I think, is because we were taught in school that they’re so rare. When I was in residency, I came up with this idea because I saw this guy who was an athlete. He was not a snowboarder, he had sprained his ankle, a couple of years had gone by, and he had had ankle pain. I was working in a clinic, in an orthopedic clinic, and he was sitting in the chair and they said, “Hey, this guy has a chronic ankle pain. Here’s the chart.”

I walked in the room, and he had x-rays hanging up on the wall. I looked at it and said, “Hey, you have a lateral process fracture.” He said, “What?” I said, “You have a lateral process fracture. Look at it. You’ve got this big chunk of bone sitting in your ankle.” I pushed on his foot right where it was, and hit hurt, of course, because it moved. He actually started to cry. I was like, “Come on, man. It’s just an ankle fracture. It’s not a big deal. All we’re going to do is take you to the operating room, we’ll sick a couple of screws in there. It’s a big piece. It’s a type II lateral process fracture. It’s going to be very easy to fix. Put a couple of screws in it, we’ll stabilize it. It’ll start to heal. It won’t move around. It won’t grind. It’s going to be way better.” He said, “You don’t understand. I’ve had pain for two years. Every time I run on it, every time I do anything active, it hurts. It hurts when I walk. I’ve had four different doctors see me, and they all tell me nothing is wrong with me. In fact, the last doctor stuck his finger in my face and said, you don’t need a foot doctor, you need a shrink.” They had all missed it.

Part of it is if the x-rays are just rotated just a little too far, if it’s not right at about 15 degrees when you do this one view on the ankle, you can miss it. They get misdiagnosed all the time because it is a subtle thing. If you don’t have just the right position on the x-rays, it’s really easy to miss it. What I did was, I started this study where I got institutional review board approval of the university to do this study, because it’s involving humans.

Basically, what I thought was I’d seen a lot of these, and I thought there’s no way that it’s really so rare. What we did was we looked at all of the x-rays, MRIs, CT scans, everything that had come into the University hospitals and clinics over a three-year period to see how common these things really are. It turns out, they’re more than 10 times as common as we previously thought. Almost 10% of the people who have an ankle injury, about 9%, actually have a lateral process fracture. A lot of times they get missed.

If you get an ankle sprain, and you treat it like an ankle sprain, and you’re not getting better and it keeps hurting and aching and swelling and that stuff, you might have a lateral process fracture. That’s what it is. You do not have to be a snowboarder to get it. In that study, I actually won an award from the American College of Foot and Ankle surgeons for that research that we did, because it showed something that was completely different, and it was a huge study. It took me about nine months of spending most weekends in the radiology reading room going through all those images to review all of them, working with the other residents to do that.

It was a huge project, but it really paid off. I see them periodically. I lecture about them at medical conferences, just because they are so easy to miss. If you get an MRI or CT scan, it shows up a lot easier. When you have an ankle sprain, you’re not going to get an MRI or CT scan. Maybe x-rays, if you’re lucky, but not always. That’s what a lateral process fracture is. It’s just an injury into the bone, in your ankle, underneath the outside of the fibula bone, on the outside of your foot.

If you have an ankle sprain, or some injury and it just aches and it continues to bother you, you should get it checked out and ask the doctor specifically to look and see if you might have a lateral process fracture.

Obviously, if you’ve got one, and you keep running on it, it’s just not going to get better. That’s what a lateral process fracture is.

If you think you have an injury that isn’t getting better fast enough, and you are trying to figure out whether or not you can run, you need to check out How to Fast-Track Your Running Injury in Record Time!

Give me 3 days, and I’ll help you figure out where you are are now, and how you can get back ton running in record time. Get started for free right now!