#277 Are crutches bad for injured runners? 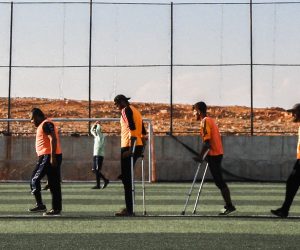 Today on the Doc On The Run podcast, we’re talking about whether or not crutches are bad for runners.

I just got off a call with an injured runner who was told by her doctor she has to use crutches, and she asked me an interesting question. Are crutches bad for runners?

Well, in short, yes. Crutches are bad for you if you use them too much, too long, or any more than you need when you’re recovering from a running injury and you’re trying to get back to running as quickly as possible. Every treatment your doctor recommends to you comes with risk.

When you use crutches, several things happen. First of all, obviously, you don’t use that foot, that ankle, that leg at all. You’re trying to let it recover. You’re trying to rest it. That’s a good thing. The bad thing is that when you’re resting it like that 24 hours a day, you’re not moving it, several things happen. Your muscles get weaker. You actually get atrophy of about 17% in only one week, and up to 60% in six weeks when you are using crutches if you’re immobilized in something like a cast. Your tendons get stiffer, your ligaments get stiffer in your foot and ankle when you’re not walking, when you’re not running, and particularly when your foot is just dangling in the air on crutches and you’re not using it all. \

At the same time that you’re not using your foot and you’re walking on crutches, the bones in your feet, in your ankles, in your legs, they actually start to lose calcium and get weaker.

We call that “disuse osteopenia.” It’s an actual real term. That is a real thing that does happen when you’re not using your foot and your ankle and your leg and you’re using crutches. You also, of course, lose your running fitness. So you’re not exercising, you’re not running. You’re going to lose your fitness. It’s just that simple. Your running form also starts to fall apart because you’re not practicing your running, and if you use crutches long enough, you will actually start to get plastic changes at the level of the spinal cord that change your neuromuscular connections and the coordination of firing of the muscle units in your legs when you run. 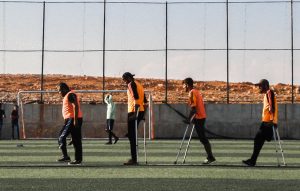 So, you hear all that stuff, it sounds like crutches are a pretty bad thing for runners, and yes, if you use them too long, they are definitely a bad thing for you, but sometimes you need crutches. Sometimes you have to give your foot a rest to let it recover. Sometimes you can do the crutches very aggressively for a very short period of time, and that tissue will actually start to heal, whether it’s a metatarsal stress fracture or an Achilles tendon injury or anything else, for that matter, and that’s not really that bad for you to do it very aggressively and use crutches for the short term. Just not the longterm, because the worst possible thing for a runner is when you use crutches longer than you need.

The whole goal with any running injury is to take the tissue healing, the increased stability and increased strength that happens as that tissue heals through the process of healing, and very closely match your appropriate increase in activity so that it’s just enough activity that you know the tissue can take it, that you can withstand that activity without reinjuring, re-tearing, re-breaking that piece of injured tissue, and that’s how you recover as quickly as possible.

Why do I have to use the crutches so long?

Why can’t you do something to get me off of them sooner?

Why can’t I start transitioning off crutches a little bit sooner than your other patients?

Why? If I’m a runner, who theoretically should be healing faster than a normal, unhealthy person….Why do I have to use crutches just as long as someone who isn’t as healthy as me?

Those are really the questions you need to ask your doctor when you really want to get back to running as quickly as possible.