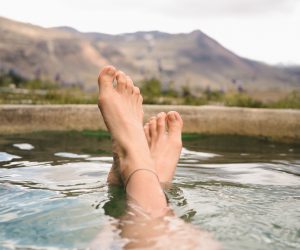 Today on the Doc on the Run Podcast, we’re talking about what you need to think about if your toenail hurts when you run.

I just had a consultation with a woman who is very athletic and she’s been having pain in the toes, or more specifically, the end of the big toenails just after running. And this has been going on for some time, but she said it seemed like it had been getting worse recently.

She was not only having pain right at the corner of the big toenails on both feet, but she was also getting sometimes what seemed like some numbness or tingling around that corner of the toenail and she wasn’t really sure why and she wanted to know…

“Am I doing something wrong?”

“Am I cutting my toenails wrong?”

“Is there really something wrong on the inside of my toe?”

These are all reasonable questions when you’re having pain in the big toe or the toenail after exercise.

While runners can get pain in the big toes related to the toenails for lots of different reasons, the most common reason is that you actually have either nails that are too long or shoes that just don’t fit you appropriately and your toenails are actually scraping against or slightly banging into the material on the inside of the running shoe when you’re running downhill or when you’re stopping and planting your foot with each foot strike.

If that is the case, then you probably have had some time where your toenails turned black and blue or you had a bruise underneath the toenail. So if that’s the case, that’s something completely different. But what we’re talking about here is she was actually having pain at the corner of the nail right at the end of the toenail out toward the end of the toe in the skin fold in the nail groove at the side of the nail on both of the big toes.

And so basically the situation was that I looked at her. She was having pain. If we pushed on the skin right near the corner of the nail, it hurt. Then I basically took some very fine nail nippers and cut out the very corner of that nail at an angle where it was sitting down in the nail groove. Then when I did that and removed the piece of nail, I could tell that there was a lot of callous buildup or thick skin in the nail groove where the nail had actually been pushing against the skin in the skin fold and causing chronic irritation.

So then I took a small instrument and removed all of that extra skin that had been building up in the nail groove and miraculously, problem solved both of the big toes didn’t hurt at all then when I pushed on him or when she pushed on them.

And so then I just talked to her about how to trim the nails back and make sure that they didn’t get stuck in there. 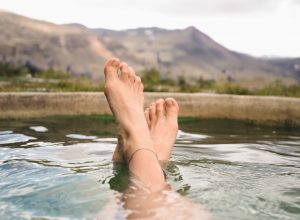 And one of the things that she said that was interesting was that she said that she had heard all normal nails should be cut straight across, and that is true. However, her nails were not normal. If you looked at her toes, they looked like they were totally normal. But they weren’t normal.

In fact, they were slightly curved at the edges so that the nail sat further down in the nail groove and when you have nails that curve on the edges and drop down into those nail grooves at an angle, if you try to let them grow out, it starts to hurt because it pushes in the skin fold at the end of the toe. Then because it’s pushing against the skin and causing chronic irritation, it starts to build up callous or thick skin underneath the nail, and that takes up space so it actually kind of pushes even more once you build up that callous material in the nail groove.

Now, you also have a nerve at each of the four corners of the toes. So if you think of your toe as a box, there’s basically a nerve at each one of the four corners. One of those nerves runs right along that skin fold underneath the nail. And if the nail is pushing against the skin and it’s compressing that nerve, it can cause numbness and tingling as well. And that’s what was going on here. So the moral of the story is that you have to make sure that the nail isn’t causing the trouble.

In the corner of the nail, if you just trim it back a tiny bit or file it down with an emery board so there’s a little less pressure in the nail groove, it can often make a huge difference, particularly when you’re running.

So if you notice that you’re having pain just at the end of the toe at the corner of the nail and you push against the skin there and it really hurts, sometimes just trimming back the corner of the nail just a tiny bit can immediately relieve all your symptoms. And if that’s true, then you know that’s the problem. All you have to do is just cut the nail at an angle and then you’ll be in good shape and you can go out and enjoy your run.