Today on the Doc On The Run Podcast, we’re talking about surgery for a sesamoid stress fracture in runners.

If you’re a runner and you start having pain under the big toe joint and you develop this thing called a sesamoid stress fracture, you may get really worried. In fact, if you go to see a doctor, you’re probably going to get a lot more worried because the doctor’s probably going to tell you these things can be very, very difficult to heal. Well, it is true.

For years I’ve been lecturing to doctors at medical conferences about running injuries.

One of the things I often talk about is that sesamoid stress fractures are one of the very few problems a runner can get that really does warrant a serious dial back in activity to make sure that you can take the stress off of that sesamoid bone. 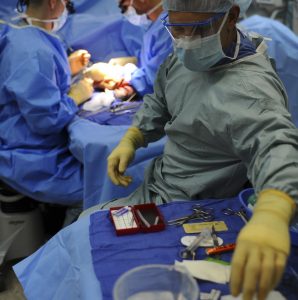 I have runners come to me who’ve said, “I’m just calling for a second opinion. I just want to talk to an expert about running injuries and make sure my doctor’s not crazy.” They’ll then tell me who their doctor is, and sometimes I know who it is, sometimes it doesn’t. Whether or not I know, that’s not really important. But if they have a reputable doctor who has recommended they have surgery to put a screw in the sesamoid bone to stabilize it, they sometimes think, “This seems crazy. It’s just a stress fracture. It’s not out of position. It hasn’t moved. It’s not really that big of a deal or at least doesn’t seem like that big of a deal.” And they really wonder whether or not it makes sense to do surgery.

Well, the truth is, yes, it can make sense to do surgery when you have a sesamoid stress fracture, particularly if you are a runner. The reason for this is really simple. When I lecture on stress fractures… In fact, I was just lecturing at a medical conference specifically about stress response, stress reaction, and stress fractures and what that really means in terms of doctors treating runners and what they really have to think about when they’re seeing you, specifically a runner. And in that lecture, I basically say there are three kinds of stress fractures that really do warrant considering a surgery to try to stabilize it to prevent it from displacing or moving apart, out of position. And those things are the tibia right at the ankle bone, the fifth metatarsal bone at its base, and sesamoid bones.

And I’m not the only one that thinks this. Because after I gave that lecture, I was talking to another doctor, his name’s Dr. McCann, who hopefully we’ll have him on the podcast to talk about this because he was actually giving a lecture specifically on sesamoid surgery and sesamoid injuries. And he actually showed all of the research that has been published about sesamoid injuries and stress fractures. And one of the very interesting studies was a meta analysis that he presented that actually showed that when the bone is stabilized, like when you do surgery and you remove all the pressure and movement from the bone, it actually does heal much faster. And for athletes, the outcomes are actually better. And that’s not usually the case where you have 100% patient satisfaction with one treatment and not with the other. But he made a pretty convincing argument that all doctors should be considering sesamoid fracture surgery a lot earlier than otherwise might be considered.

And part of his argument for this is really simple. The very worst case scenario, if you have a sesamoid stress fracture that does not heal, is that we’re going to do surgery to remove the bone. We’re going to take it out. If you get this thing called sick sesamoid syndrome and the bone is not healing, it’s not going to heal, it’s never going to heal and it’s just going to cause you pain forever, then we take it out. And he says, “Look, that’s the worst case scenario.” And one of the questions I actually asked him in the session was, “If you’re worried about breaking the bone by putting that little, bitty screw into the sesamoid bone, aren’t you worried you’re going to break it and make it worse?”

And he said, “Yeah, sometimes I worry about that. But, again, the worst case scenario is removing the sesamoid bone.” So there is a lot of reasons doctors may really tell you you need to have surgery when you have a sesamoid stress fracture. And if they’re telling you they need to stabilize it in order to prevent it from getting worse, to prevent it from moving out of position, and compress it so it will heal faster, that is not crazy. That is completely and totally reasonable. But anytime somebody recommends surgery for you, always get a second opinion with an expert. If your second opinion confirms that all that makes sense, then you know what you’re doing is right and you can move forward with confidence and get back to running.