Today on the Doc On The Run Podcast we’re talking about how worn out running shoes cause running injuries.

Today on the Doc On The Run Podcast we’re talking about how worn out running shoes cause running injuries.

But before I gets started, I want to tell you I created a little video that’s going to be helpful for you. I’ll have it posted in the show notes section on this podcast episode on DocOnTheRun.com. So go check it out. It’s going to show you exactly what I’m looking for when I see a runner who’s been injured, I’m trying to figure out whether or not they should have replaced their running shoes, and if those running shoes actually contributed to their running injury. 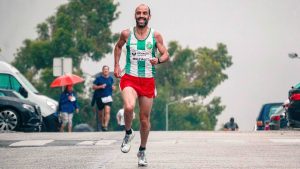 Now, this isn’t an argument about barefoot running, there is some merit to that too, but that’s a completely separate thing. So don’t send a bunch of comments saying that you can run barefoot and you don’t need any of that stuff. It’s a different thing. I’m not talking about that here.

Most of us run in running shoes, and when we buy running shoes, we buy them specifically to support our particular foot type and help support us, help us run and protect us from injury. Of course you get the shoes, they feel good and if you’ve got the right kind of shoes for you, they will help protect you and they will help you and you’ll feel comfortable in them.

When you first get them, they probably feel a little weird. They feel a little stiffer, because they feel a little too supportive to you and they don’t seem just right. And then you break them in, and then eventually the break in process keeps going to the point that the shoes are actually worn out.

When the shoes get worn out, your running shoes no longer protect you as effectively. Why is that? Well, when you first get the shoes, they feel weird because when you land, you have peak forces, meaning that there’s a whole lot of force under some particular metatarsal bone or some area of your foot, where you happen to land with more force and that is unique to you. That’s why running shoes kind of work differently for different people, right? Somebody like you may run in your type of shoes and hates them, but you love them. And part of that is because of the way they work with you, your foot type, your running form, and your running style.

So you get these peak forces and you’re landing, let’s say under the fifth metatarsal head on the outside of your foot that you’re really a supinated type of runner, and you land on the outside of your foot a lot. When you start to wear out the running shoes during that sort of initial break in period, those peak forces kind of break down some of the cushioning material in the midsole of the running shoes, the EVA material, and then it distributes some of those forces better to the other metatarsals, because you have crushed down some of that cushioning material. That’s when they start to feel good.

But the deal is that the same reason you get these peak forces that cause you to feel more comfortable when you actually crush some of that cushioning material and it spreads the forces out over a bigger area, well that causes a problem when the shoes start to break down and when the shoes start to break down, they become less stable. They actually cushion you less and then when you land, you land with higher peak forces under those particular structures that are prone to injury in you, because you have asymmetry of forces. The forces are actually pounding those things more, because the shoes aren’t as stable, and they kind of wobble and can apply forces to those structures a little bit more in what we call peak force, where it’s a sudden force in that area. And that’s because they’ve worn down under these spots that you need them to wear down initially for them to work best for you.

The easiest way to tell how you can tell when you’re running shoes feel like they’re worn out, is to buy two of the exact same pair when you get the running shoes, if you can get them in different colors, that helps. But basically, let’s say you get a black one and a gray one. You run in the black ones, you think maybe they’re starting to get worn out. Then you put on the gray ones, you run in those and they feel completely different. That’s when you know you’ve really worn out the first pair of running shoes.

The other way is how you can see that the shoes are worn out. Whenever I see runners, when I do, even when I do webcam consultations with runners, I want to look at the running shoes and I want to see if there’s any evidence they’re worn out.

The bottom line is that you should replace your shoes whenever in doubt. If you’re wondering whether or not they’re worn out, they probably are. That’s the bottom line. The shoes that are in good condition will protect you from injury, so you want to make sure that you’re wearing shoes that will protect and support you. And don’t forget, check out the video where I show you how to analyze your shoes to see when you need to replace them. If you do that, you can run a lot longer with a lot lower risk of running injuries.