#200 Should an injured runner be patient? - DOC

#200 Should an injured runner be patient?

Today on the Doc On The Run podcast, we’re talking about whether or not an injured runner should just be patient.

One day I was having lunch with a friend of mine who is a cardiologist. This a guy I have known a long time. We actually went to high school together. We were having lunch and he was telling me this story about the previous day where his son had come from school to his office, and then his dad was going to take him out to do some stuff after work, but his son had to sit in his office waiting for him to finish up with all of his patients that afternoon in between the end of school and the end of his office day.

And he said that when he got in the car with his son after he finished up everything in the office, and they left the office, they were in his car, they were on their way to dinner and his son said, “Dad, you know why they call them patients? Because they have to wait all day in your office being patient while waiting to see you.” Now, we both thought this was really funny, but it brings up a good point.

We do have to spend a lot of time just waiting around doing nothing when you are a patient.

I just got an email recently from someone who is a runner and one of the things he asked, he said, “Should I be patient, and are the chances good that the pain subsides after four to six weeks on its own, after not running?”

Well, that’s a good question, but that depends. The first thing that you have to think about when a doctor tells you, you just should take off running, and stop activity, stop doing everything for four to six weeks, you have to ask yourself several questions. 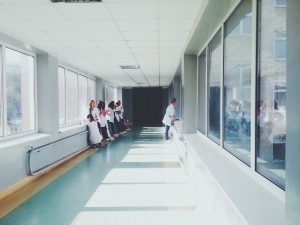 The first thing is, do you have time to be patient?

You have to really think about this, right?

Can you afford to atrophy? If you take four to six weeks off, you’re going to lose most of your fitness. This is not complicated. You have to understand that you really are going to lose a ton of fitness if you take a month or month and a half off of all activity.

Can you afford to lose your aerobic fitness? I mean, if you take a month and a half off, how much of your aerobics fitness is going to dwindle away, and if that does happen, how long will it take you to earn it back? You’re going to have to work to get that aerobic fitness back. How long is it going to take you?

Can you afford to get weaker? Think about all the muscular strength you’ve developed as a consequence of your training leading up to that injury. Four to six weeks of no activity is going to leave your fitness decimated.

Can you afford to let your running form rot away and just deteriorate over that month or month and a half? Your running form comes as a consequence of running. It becomes better when you’re doing speed work. It becomes better when you do tempo runs. That is going to all dwindle away over a month or a month and a half of no activity.

You also have to ask yourself if you have any plans for races, events, or other activities that you’ll be unable to participate in if you really are just patient and you try to wait it out for four to six weeks.

The other thing that you have to think about that nobody seems to really talk about is a million dollar question. I mean what will happen if you are patient, if you do just take four to six weeks off with no activity, no running, nothing, and it doesn’t pay off?

You have to ask your doctor, what is the probability that I’m going to be better in four to six weeks? It’s fair to ask them that question if they tell you to stop running for four to six weeks. You get to choose your path of healing, so you need to make sure that plan includes strategies for staying fit, maintaining your running fitness, and getting back on course, and getting back to running.

Now, even if you have to take some time off, make use of it, create an active recovery plan. Remember, you are a runner. You need to demand more from your doctor and yourself in the recovery process, so get clear expectations on whether or not you should really heal during the period of time you’ve been told you’re going to be off of activity.

Do everything that you can to maintain your fitness, your strength, your running form, your neuromuscular connections. Do something to maintain all of those things, so that they don’t go away while you’re just waiting.