#199 How do trail runners get chronic ankle instability? - DOC

#199 How do trail runners get chronic ankle instability? 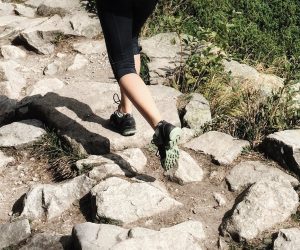 Today on the Doc On The Run Podcast, we’re talking about how trail runners get chronic ankle instability, how you can tell if you have it and what you can do about it!

Okay, before I get started in this episode, I just wanted to let you know that I created a video for you that shows you one very simple exercise you can actually do to get stronger ankles if you’re a trail runner and you feel like you have some chronic ankle instability, you feel like you have some weakness in your ankles, you have a little bit less stability than you’d like to have. Now that video is short, this video is free and will help you get stronger ankles in only a few minutes a day. It will be at the bottom of this page, so check it out.

So, first of all, chronic ankle instability is a term that doctors give to people who have weak or unstable ankles. So basically, if you go to the doctor, and you tell the doctor that you run on trails, you’ve sprained your ankles before, and you kind of roll ankles frequently, they just feel unstable when you’re on uneven ground, when you step on a root, or rock, or something, your ankle sort of flips out from under you a little bit. It seems sort of like you’re spraining your ankle but it doesn’t even hurt, well that’s something that we call chronic ankle instability. Sometimes it’s really severe, sometimes you really can’t even walk on uneven ground without rolling your ankle. But it’s very, very common.

The reason it’s common is that it usually starts with an ankle sprain. So if you’re a runner, and you run on trails, sooner or later you might sprain your ankle. And when you do that, you injure the ligaments that hold your ankle stable. Specifically, there’s one ligament called the ATFL or anterior talofibular ligament, the term’s not important but it’s basically just the one ligament in your ankle that’s most often ripped or torn when you get an ankle sprain. By definition, an ankle sprain means that you tear, in some manner, a ligament in the ankle. The ATFL ligament, that ligament is basically on the inside of your subtalar joint capsule. A joint capsule is what surrounds the joint, holds the fluid in, and helps add stability.

When you’re running and you hit an uneven surface like a root, or a rock, or a slope in the trail, what happens is you actually sense that because the joint capsule stretches. And when the joint capsule stretches, it tells you that you’re about to roll your ankle, it’s about to tilt over, and then your peroneus brevis muscle fires to pull your foot back under you, it keeps your foot underneath you, and prevents you from rolling your ankle.

Well the problem is when you have had a severe ankle sprain, and you have this damage to the proprioceptive nerve fibers, what happens when you hit that uneven surface, a sloop in the trail, a root, or something, and your ankle starts to roll over, your body starts to sway, but your brain doesn’t get a single from those nerve fibers that it’s changing position.

Not until you actually start to move and you’re starting to fall over, and you’re vestibular system, the balance center in your inner ear, when that picks up the motion because your heads moving, because it’s swaying to the side now. Well then your peroneus brevis muscle tries to fire to pull your foot back under you, but in some cases it’s too late. You either roll your ankle, or your peroneus brevis muscle may actually fire so hard around the outside ankle, trying to pull your foot back under you, that it actually breaks your fifth metatarsal bone. That does happen quite a lot.

Now, that’s the thing, I said, this is all consequence, if you think about it, of an ankle sprain. The problem is that runners are tough, and with trail runner, you know, you get an injury and once it heals, you just want to run. And as soon as you start running again, you may think that you’re okay just because you’re running.

I used to have really bad chronic ankle instability myself, that’s because I used to race motorcycles a long time ago, and I’ve crashed a motorcycle in a race, and ripped all the ligaments in my ankle. It was incredible unstable up until I went to medical school, then I basically did all this research, I figured out what exactly you can do to restore to proprioception to the ankle, and how you can strength specifically the peroneus brevis muscle that really stabilizes your foot, and keeps your foot underneath you when you have chronic ankle instability.

And then I created this whole ankle rehabilitation protocol that I give to athletes who have been injured and get chronic ankle instability. It’s very, very effective, it’s also very simple. One thing I’ve never done is actually try to figure out which one of those exercises is really necessary in each phase, but there are different phases of the exercises. There’s on particular exercise though that I think is definitely the most helpful at strengthening the peroneus brevis muscle, and that’s the one that’s in the video for you on the show notes page on the podcast section on docontherun.com.

But, you have to figure out if you feel like you had some ankle issues, you feel like you’re prone to rolling your ankles, you’re sort of a little unstable, you know really uneven surfaces make you kind of nervous when you’re running. Then you may have had some injury to your ankle many years ago, maybe playing soccer as a kid where you damaged those proprioceptive nerve fibers. Well, if that’s the case you can figure that out.

So when I see someone at home, when I see a runner, even if I do a Skype consultation with a runner who says they’ve, you know, had a series of ankle sprains and they want quit having ankle sprains. The tests for this is really simple, I actually tell them to stand up, so if I’m looking at somebody on webcam, I would just say, you know, if this is you on a webcam visit I would hear your story and all that other stuff. Then I would say, “Okay, I want you to stand up. Now stand up, hold your arms out straight. Now I want you to close your eyes.” And you should be still, you should be not moving, you shouldn’t be wobbling unless you’ve been drinking or something. But you should just be stable.

But that’s because you have the whole visual cue system telling your brain where you are and where you are in relation to your foot, and it tells you where your positioning is. But then as soon as you close your eyes, you may start to sway, and you may have a very difficult time balancing on one foot particularly that bad foot when your eyes are closed. If that’s true, then I think you have chronic ankle instability.

So, if that’s the case and you have to do something to get that stability back, sometimes you can work through this whole rehabilitation protocol, but most people don’t really need to do that. Most people who have chronic ankle instability seem to have weak peroneus brevis muscles.

And if you can just do an exercise where you strengthen those muscles, literally in just a few minutes a day, you can try that test again and see how much you improved. In many cases that will make a huge difference, and when you have a lot more strength in the ankle, just from doing this set of exercises, then you can try running on trails and see if it’s better, and see if it’s improved.

So go check out the video that I made for you to show you how to do that exercise to strengthen your ankles when you’re running on trails. Again, it’s short, the video is free, and it’s definitely going to help you get stronger ankles. Just go to the show notes page for this episode on docontherun.com, and then you can strength the peroneals so you have stronger ankles when you’re out running on trails.