#195 What runners should do before getting custom orthotics - DOC

#195 What runners should do before getting custom orthotics

Today on the Doc on the Run Podcast, we’re talking about what runners should do before getting custom orthotics.

As race season ramps up, I see lots and lots of runners who are in the midst of their training, and, for some reason, they want to get custom orthotics.

Now, I know that we, as runners, with athletes, we’re always looking for the tools, the latest training techniques, the newest, coolest shoes, the best kind of socks, the newest heart rate monitors, whatever, to help us train better and be faster. Now, there are lots of outlandish claims that I’ve seen regarding custom orthotics. Sometimes doctors will tell you they’ll make you run faster. I even at one time had a guarantee that I started where I told people that I would give them their money back if they did not have a new marathon PR after using custom orthotics, that you could use them for a year, and if you didn’t have your fastest race ever, I’d give you all your money back.

Well, I will tell you up front that I still offer that guarantee, but I do not make custom orthotics for the overwhelming majority of runners I see because most runners don’t need them. And if I made orthotics for you and you didn’t actually need custom orthotics and you didn’t actually need customized support to change your form, to adjust the way that your foot’s hitting the ground, to prevent you from having recurring injuries, then I don’t think they would make you run faster. If you’re injured, if you’re always injured, if you’re always under trained because you’re having recurring injuries, and you get custom orthotics, then in that case, custom orthotics can make you run faster. But they’re not jet fuel for your feet. 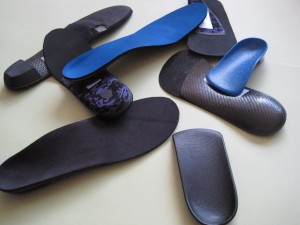 So when I was in training, I had rotations with lots of different doctors. And a number of different doctors I worked with would do this routine where they said, “Look, if you think somebody needs custom orthotics, you can just tell them to get some over-the-counter orthotics. And if they try those over-the-counter orthotics and they get a little bit of support from them that actually really helps their condition because it’s stabilized their foot just a little bit, it’s held them in a corrected position a little bit, and it helps them improve some, then that actually makes it more likely that custom orthotic therapy might be worth it.”

So if you think you might need custom orthotics, try over-the-counter inserts first.