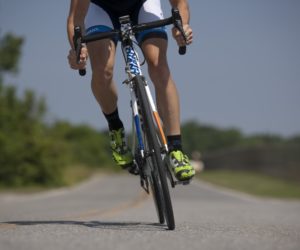 Today on The Doc on the Run Podcast, we’re talking about cycling workouts for recovering runners.

There are really five problems when you get injured and stop running and stop exercising.

1. You lose your aerobic fitness.

4. Because of the indiscriminate scarring that happens, where you get collagen strands forming between all these different tissues, when you get injured, you get stiffer.

5. In addition to all that , you’re losing your neuromuscular coordination. What that means is, all the muscles units that you have trained during your running training, that fire in unison, in coordination to make you strong, stable, and maintain your running form, those are also degenerating when you’re not exercising.

Obviously, if you want to get back to running, as soon as you’re healed, you need to do something to prevent all of these changes that can slow you down and put you at a higher risk of re-injury once you actually do get back to running and training.

Cycling can help prevent all five of these detrimental changes in your running body. Cycling is very low impact and it’s forgiving. But not all cycling workouts are created equal. If you’re recovering from a running injury, and you want to ride your bike to prevent the decimation of your running fitness, you need to ride slow and steady. When you’re doing that, when you’re riding your bike, when you’re trying to recover after a running injury, you want to think about staying in zone two. Think about base training. You want to ride at a sustainable pace that is, really, truly, like a conversational pace on your bike for a long period of time, not a short workout where you have a tremendous output of energy and you’re covered in sweat, and you can’t talk, think, or do math.

A good example of this is that, once a week, during all of my iron-man training, I basically did a 100-mile bike ride every single week. I would ride from San Francisco to Point Reyes Station and back. During that ride, my main focus was to stay seated, stay, basically, somewhere between 85 and 95 RPMs at a sustainable wattage that I knew I could hold for six hours. This is safe. So, when you’re riding long, and you’re staying seated, you’re in the saddle, you’re not standing up, you’re not cranking hard on the pedals, it’s completely safe.

Many injured runners call me for help through webcam visits, and phone consults, and many of them ask about whether, or not, they can do a strenuous cycling workout to try to maintain some of their running fitness, as well as, some sanity. I totally understand this desire.

Cycling workouts do take longer than running workouts to get in an equivalent fitness benefit, but you have to be careful. One thing you need to understand is this: spin classes are dangerous. I understand the appeal of them. You can go in and in an hour, hour and a half, you can expend a lot of effort. You can really feel like you got a great workout, but, again, spin classes are dangerous.

There are two things in spin classes that really put you at risk. The first is that when you’re doing these low RPM, high wattage, huge forces, where you’re actually pulling on the handlebars and you’re leaning side-to-side, cranking away, asymmetrically that’s risky. It can load the structures in your foot, or ankle, that have been injured in a way that applies excess stress to them, and causes setback.

Now, you also have the other end of the spectrum when you’re doing a spin class. When they tell you to completely turn off the resistance, you’re doing really high RPM, zero resistance, spinning and you’re trying to see how fast you can spin, that’s also risky. When you’re doing that, you have erratic motion, and you’re at high speeds, your hips are rocking, you’re bouncing around in the saddle, and all of that, again, can load your injured foot in a way that torques it, twists it, applies forces to it in some way that can cause aggravation of your running injury.

When you’re riding a bike, while recovering from injury, it can really help you maintain your fitness. It can help decrease the stress hormones, so you don’t feel so crazy while you’re healing. It can maintain your running strength, and it can keep you lose and limber, and keep your neuromuscular coordination intact. You have to really understand this.

When you get a running injury, and you just sit still, you stop training, you don’t do anything, and you just sit around and “recover.” Well, you’re getting weaker. Not only are you losing your aerobic fitness that you worked so hard to build, but the stress hormones that actually impede your healing, those go up when athletes stop exercising.

If you stop exercising, and you get stressed out, you become emotional. You become aggravated. You’re easily irritated. Those are signs that you have stress hormones that are increased in your system, and those things, like Cortisol, can impede healing. And, in a sense, actually make it take you longer to heal. It’s better if you can avoid that increase in stress hormones by maintaining some athletic activity of some variety that not risky for your foot.

Of course, you’re also getting weaker. Anytime you’re not improving you’re getting weaker. This is true when you’re training and when you’re healing. Things are always either getting stronger or weaker. If you are not exercising, at all, all of your muscular strength is just wasting away. Then, when you get back to running, you have less strength to support and maintain your running fitness. And that can lead to overloading that previously injured structure when you actually do get back to running. And that could put you at a risk of a reinjury. You don’t want to do that.

Also, while you’re just sitting around, and you’re healing a running injury, you’re going to get more scar tissue forming that makes everything in that foot, and ankle, stiffer. That is a serious problem, because when you get back to running, if it’s stiffer, it’s a lever on the end of your leg, forces are higher. When those high forces get pushed through that injured foot, you’re more likely to re-aggravate that injury. The last of those things that happens is that you have the neuromuscular coordination that maintains your running form that helps protect you from running injuries when you’re actually training. That falls apart if you’re not exercising.

The thing everybody thinks about is running, gravity. And gravity and the pounding forces associated with running, well, that’s only one of a half a dozen contributing factors that can prevent healing of a running injury. But if you cycle while you’re healing, you can address all those other factors without worrying so much about gravity, because you’re not pounding away on it.

If you do that, if you use cycling workouts, and you’re really sensible about it. You just maintain slow and steady workouts, where you’re actually getting exercise, you’re keeping things moving, that can really help you a lot.

Then, when you get back to running, and full training, you’ll be much stronger, much more stable, and a lot less likely to get a re-injury, or another setback, that might otherwise send you off course.