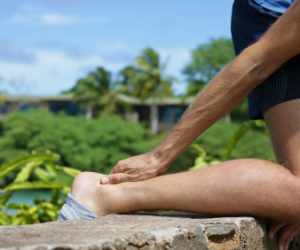 Today on The Doc on the Run podcast, we’re talking about the early warning signs of Achilles tendon trouble in runners.

What are the Achilles early warning signs when you’re a runner?

As a runner, you have to understand this, because Achilles tendon problems are one of the worst possible problems you can get if you’re a runner.

The Achilles tendon is the largest tendon in your entire body, and if it gets injured, you’ve got a real problem because that’s what allows you to pull your heel up, off the ground, push off and accelerate when you run and what most runners don’t understand is that it also helps slow you down and decelerate when you land as a heel striker and you’re trying to slow down, absorb force as you’re landing while you’re running.

The Achilles tendon is crucial at both your landing phase and your take off phase, when you’re a runner. If you get a problem in the Achilles tendon, it can be a very, very serious problem.

I thought it might be helpful to do a very short episode that just talks about those early warning signs so you can watch out for them. Now these are things I’ve had myself, but the difference, of course, is that since all I do is talked to injured runners all day, I am very aware of these little, weird things that serve as early warning signs and then I take action immediately to make sure that my Achilles tendon does not turn into a big problem, and you can do the same thing.

All right so here are the early warning signs. Now most runners do not get sharp pain or some excruciating problem in the Achilles tendon when it first starts bothering them when they run. But let’s say you go out and you do some hills or maybe you’re running on a trail or some uneven surface, and then you start to have trouble. Well that trouble usually happens because you have an initial, sort of over-stress, over-use syndrome to the tendon where it gets loaded a little bit too much.

You then get a little bit of fluid that accumulates around the tendon, but it’s around the tendon and within this covering of the tendon we call the “paratenon.” The paratenon is adhered very slightly to the actual Achilles tendon with some little bitty nerve fibers and when you get fluid in that layer in between those two things, and it stretches, it actually pulls on those nerve fibers, tugs on them, and causes some weird sensations that are actually your early warning signs.

1. Squeezing Sensation Around the Achilles Tendon

The very first thing that you’re going to feel is probably not pain. It is probably going to be this sort of sensation that the Achilles tendon actually feels like it’s squeezed a little bit.

I’ve actually had several runners tell me that when they get the very first sign of this squeezing sensation around the tendon, it feels almost like there is a terry cloth wrist band around their ankle, or sometimes they’ll say it almost feels like they have one of those neoprene timing chips on their ankle that we used to get all the time when running marathons or doing triathlons. It’s that weird tightness around the tendon like a rubber band being placed around the tendon, or the collar of a sock being around the tendon.

2. Tightness in the Achilles Tendon

If you ignore the initial signals of a problem and you still keep training, then it might actually start to become painful.

3. Pain in the Achilles Tendon

The third of those early warning signs is where you start to have some discomfort and pain when you get up and step out of bed. And that is pointing to more fluid accumulated in there and it’s getting to be more and more of a problem. Achilles tendon injuries generally follow a pretty standard progression where it goes from this very mild beginning injury where you have some fluid around the tendon, to Achilles tendinitis where you have fluid within the tendon itself, the inflammation is actually inside the tendon, and then you get the generation of the tendon over time that leads to more serious problems where the tendon is actually sort of starting to degenerate and can then rupture.

So you don’t want to get to that stage. You do not want to have a ruptured Achilles tendon. If you rupture your Achilles tendon you will never be the same so you have to make sure that you look for and recognize these early weird sensations, and then make note of exactly what you feel because if it doesn’t get better and you call me or you go to your doctor having made note of these initial problems and written them down, will really help.