#352 Why flat arches are less stable when you run - DOC

#352 Why flat arches are less stable when you run

Today on the Doc On The Run podcast why flat arches are less stable when you run.

This question comes from Soda who entered a question sent to me through the Doc On The Run YouTube channel. He was watching one of the other YouTube videos about stability in the foot when you’re running and he asked a question he said “Why would a flat arch be less stable?”. That’s a great question and I think it’s really important to understand this because I know so many runners are running in the wrong kind of shoes using pronation control shoes and they don’t need them or they do need some motion control and they’re running in neutral shoes. Flat feet basically are less stable because they are in a pronated position.

What does pronated mean?

You have to remember that pronation and supination are opposites. You need both.  Pronation of the foot happens as your arch collapses when your foot elongates. So when you look at the foot and you actually start to decrease your arch height, the foot actually elongates because the arch actually comes down toward the ground and pushes the toes outward. You do that every time you run. You do it every time you take a step. And you need both pronation and supination and you need pronation to absorb impact  and decrease forces. Supination does the opposite. Supination makes your foot flexible. Supination does the opposite. Supination actually transforms your foot from a flexible shock-absorbing adaptor to a rigid lever that can propel you forward as you run and push off.

Now in the moment that you push off you need that rigidity. You need to have a rigid lever so that you can actually propel yourself. Not if foot is all flexible then obviously you can’t push off very effectively and that’s why we have both from pronation and supination. And if you think that the foot can’t be too rigid I want to give you an example that’s why I have this foot model here.

There’s a procedure we do on people that have really really bad end stage flat foot deformity. So when the foot is completely collapsed the posterior tibial tendon that helps support the foot has failed and you have a lot of pain because you got arthritis in the joints in the rear foot then we actually do a procedure sometimes called the triple arthrodesis. I actually invented a surgical instrument called the tarsal joint distractor that doctors use to do the triple arthrodesis procedure. So because of that of course I am familiar with this procedure and that procedure basically entails fusing the subtalar joint here which is where most of the pronation and supination on your foot happens. We fuse the calcaneocuboid joint here and we fuse your talonavicular joint here and we fuse all three of these joints.

That stops all the motion there. Your foot cannot collapse anymore because it holds your arch  in the position we put it in. That sounds like a good thing. It adds a lot of rigidity. But this is a circumstance that is well known to foot surgeons that can be way too rigid.

One of the things that we have to do when we fuse your subtalar joint and we fuse your talonavicular joint and the calcaneocuboid joint and we fuse all three of these together. Your foot is so rigid that if we put your foot in a normal position or a supinated position then obviously as your foot supinates, the fifth metatarsal bone gets closer to the ground. Now if you can’t move out of that position and get your forefoot back on the ground in a way that’s flexible enough to absorb those forces, you run into serious problems.

This is a well-known complication of putting the subtalar joint in the wrong position. So if we actually tilt your heel bone over in this position where it is supinated then what will happen is that when you walk, when you run you’ll have so much stress that you will break your fifth metatarsal bone. So you get pain all down the outside of the foot and in many cases will actually break the metatarsal bone.

When we fuse your subtalar joint we always put you in at least five degrees of rotation in this direction so that the rest of your foot remains mobile and can move. So the thing is, the main point of this is that the calcaneocuboid joint when we tilt the heel bone over the supinated position because of the way the joint is shaped here. It actually locks all of the joints across the mid foot. All this stuff is working together but in the mid foot as soon as you lock your calcaneocuboid joint it makes everything in the forefoot rigid. 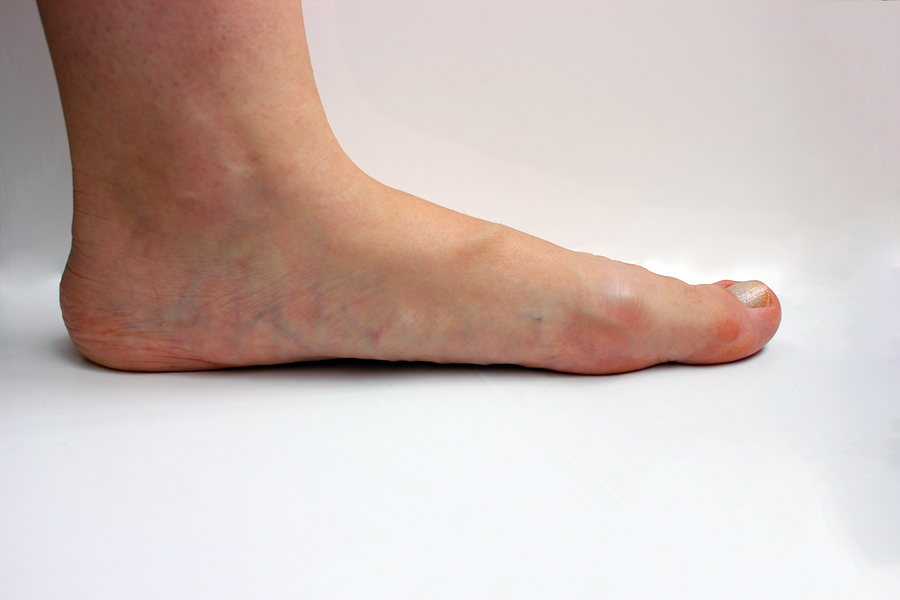 If we fuse it then it’s locked obviously because it can’t move. But when you tilt your heel bone over that locks this joint in a position that will make you stable and then you can push off. Otherwise your foot will just bend in the middle. So the calcaneocuboid joint walks everything across the midfoot when you tilt your heel bone ober. But when you’re pronated the heel bone is in a relaxed position. It’s leaning inward. It’s unlocking the calcaneocuboid joint  and that’s why we say you have too much flexibility and you have too much pronation if you have really flat feet. Now having said that, not everybody that has flat feet has pain or problems and it’s not pathologic as we say. But that in short is the answer. So the answer to this question why are flat feet less stable in runners well it’s because the heel bone tilts over, it unlocks the calcaneocuboid joint makes the whole midfoot more flexible and then you have more motion throughout the foot when you’re trying to push off while you’re running .

So great question, thanks for sending that in and again not everybody that has flat feet has problems. If you don’t have problems just because your feet seem flatter doesn’t mean it’s a real issue. But the magic is all in the calcaneocuboid joint and the tilting of the heel bone.

Hopefully that helps you understand a little bit about why it is that flat feet are less stable when you run.