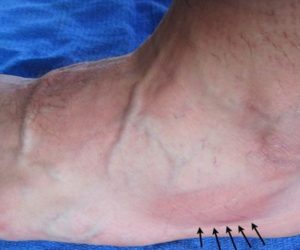 This article will explain everything you need to know about how sports medicine podiatrists diagnose stress fractures in the foot. – by San Francisco Sports Medicine Podiatrist, Dr. Christopher Segler.

If you are reading this right now you are probably a runner or triathlete. Or maybe you just started running and are in training for your first marathon. Or maybe you are a seasoned Ironman triathlete trying to qualify for a Kona slot. But no matter how long you have been running, one thing is for sure… your foot is aching and you are worried that you have a stress fracture in one of the bones in your foot.

As as a San Francisco based sports medicine podiatrist and Ironman triathlete myself, I see lots of injured runners. I have even had to deal with a stress fracture myself once.

So I know how worried you are right now. Nobody wants to lose all of their fitness and conditioning while waiting for a stress fracture to heal.

To begin with, your foot is made up of 26 bones and a multitude of supporting tendons, ligaments and muscles. While there are many different structures in the foot that can get injured while running, the five metatarsal bones are the ones that take the most abuse and most often suffer stress fractures.

Because of this simple fact, the podiatrist is going to automatically start thinking stress fracture when a runner limps into the podiatry clinic. In making the diagnosis, the doctor will basically try to rule out the other likely causes.

The truth is that the diagnosis of a metatarsal stress fracture is the default diagnosis whenever there is:

1. a story from the patient consistent with a stress fracture

2. no evidence for a soft tissue injury (like a torn tendon or ligament sprain)

3. no evidence of a bone tumor or broken bone on x-ray

The first part of your podiatrist visit will consist of your doctor taking “history” of the injury. Provided you tell the doctor that your foot hurts when you run, that you have been increasing your milage, and that it is an aching pain in the foot during or after a run, stress fracture will be high on the list of the most probable diagnosis. If the pain started suddenly after one of your runs, this make a metatarsal stress fracture seem more likely.

If you also say that you have noticed a little bruising or swelling on the top of the foot, a stress fracture is even more likely. When asked where it hurts, if you point to one of the five metatarsal bones, that’s even more reason to think it is a stress fracture.

But even if you have all of these, it still doesn’t guarantee that you have stress fracture. So the foot doctor will examine you to make sure it isn’t something else causing the pain in your foot.

As sports medicine specialists and foot surgeons, we know exactly where the structures are located within the foot. So with a little detailed poking and prodding, the podiatrist will decide whether it is a stress fracture or something else.

In general, if you have a stress fracture, it will hurt when you push on it. But it shouldn’t really hurt if your podiatrist pushes on other structures near the broken bone while examining you.

The first thing to do is just look for any bruising, swelling, redness etc. The location of these outward signs of injury can guide the doctor to the probable location of the injured structure. For example, the foot in this picture belongs to a marathon runner in San Francisco. As you can see, he has bruising on the outside of the foot. We know that the anatomic structures underneath that bruise are the 5th metatarsal bone, the cuboid bone, and the peroneal tendons. 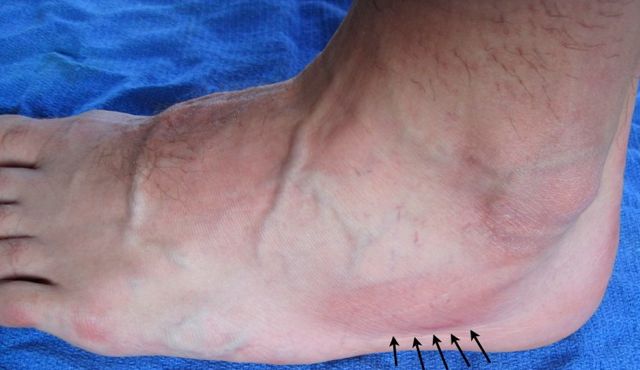 If no bruising or swelling are noted, then your doc will start testing the function to make sure nothing is injured. He will ask you to move the foot up and down, toes up and down, foot side to side, etc. You probably wouldn’t have any pain with these motions if it is just a stress fracture.

A quick foot x-ray provides some reassurance that something worse isn’t going on (like a complete break in the bone or bone tumor). Provided the x-rays show nothing, you will most likely get a diagnosis of a “metatarsal stress fracture in the foot.” 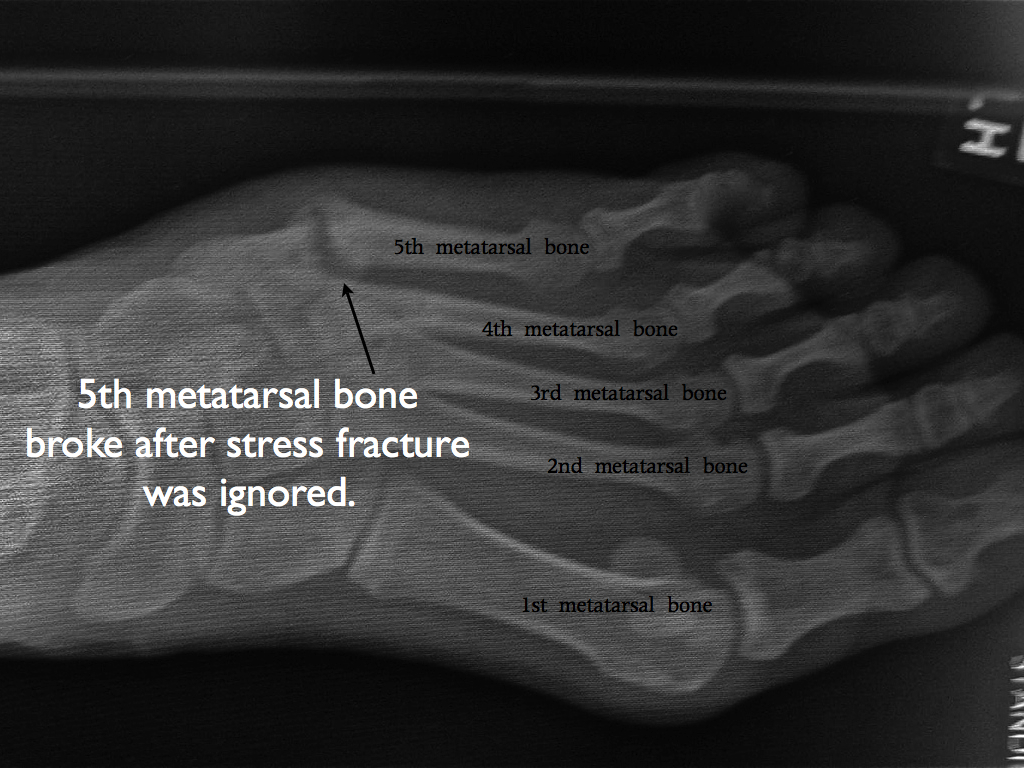 In most cases, you will be instructed to stop running, stay off the foot as much as possible and wear a big clunky boot called a “fracture walking boot.” If you do have a stress fracture (or mild case of tendonitis, tenosynovitis, or a sprained ligament) and you follow those instructions, it will almost certainly be all better in about 6 weeks.

If after it is all healed up (after you have lost all of your running fitness while hobbling around in the boot for 6 weeks) and then you take an xray, the stress fracture will show up as a white line where more calcium is being laid down or as a bulge in the metatarsal bone. If nothing shows up, it is possible that it was something else caused your foot to ache when you ran.

So then how can you know for sure?

The best way to tell for sure is an MRI (magnetic resonance imaging). MRI is extremely reliable for diagnosing both stress fractures and soft tissue injuries like torn ligaments, sprained ligaments, and tendinitis in the foot.

Then why don’t doctors order an MRI for stress fractures?

The reason why most don’t order an MRI is that most injuries that even look like a stress fracture will be all healed up in about 6 weeks of wearing a boot. The doctor has nothing to lose by just treating your foot like it is a stress fracture. Your insurance company (who has to pay for the MRI) doesn’t want you to have an MRI.  And your doctor (if he has a contract with the insurance company) may say you don’t need it.

The truth is that the injury will probably heal, you just may have to cancel your training for about a month or two.  Unfortunately for you (the athlete in training), this is a major setback.

As a marathon runner myself, and someone who hopes to one day qualify for the Ironman World Championship, I think an MRI is warranted and should be ordered by your doctor if a metatarsal stress fracture is the most likely diagnosis.

There are two reasons I say this. 1) I understand how badly you want to maintain the fitness you built up prior to sustaining the injury, and 2) I don’t contract with any insurance company, so I don’t have to lose any sleep over any insurance company paying for an MRI.

So if you think you have a metatarsal stress fracture, I would recommend that you see a sports medicine podiatrist who actually runs and understands runners. And make sure you get an MRI, so you can know whether or not it is really necessary to sit still and miss your next big race.

See you at the finish line!

Dr. Christopher Segler is a runner, triathlete and sports medicine podiatrist in San Francisco.  He makes house calls because he realized most athletes also have jobs and can’t waste time going to doctor’s offices. You can find him running in Golden Gate Park or riding in Marin. You can reach him at (415) 308-0833.