#650 How soon can I run after 5th Metatarsal Fracture Surgery? - DOC

#650 How soon can I run after 5th Metatarsal Fracture Surgery?

How soon can I run after fifth metatarsal fracture surgery? Well, that’s a great question, and that’s what we’re talking about today on the Doc On The Run Podcast.

Now, we, as runners, all fear getting stress fractures because if you talk to all of your running friends, you’re almost certain to find somebody who has at least had a stress fracture once. I’ve had one myself, and I know that it’s a real bummer to be told you have to wear a fracture walking boot, you can’t do your race, you have to cancel your trip. Even worse, if you ignore it and you continue to run on it, you could weaken it to the point that it actually cracks, moves out of position, and then you have to have surgery to put the bone back together, repair it, hold it together so that it can be stable enough for you to actually continue to train, maintain your running fitness and get back to running.

Today’s episode actually comes from a comment and a question sent in by one of the viewers of the Doc on the Run YouTube channel. This was Jean, wrote in and she said, “Hello, Dr. Segler. I had a fifth metatarsal fracture repair surgery five weeks ago. I was started to walk without crutches and a knee walker or a scooter as of yesterday, but my foot feels achy, though. Well, as a runner, when can I possibly resume running after my metatarsal surgery?”

This is what everybody wants to know. My first question would be, without any disrespect, why isn’t Jean asking her doctor this, whoever did the surgery? That would be the best person to ask.

I didn’t do the surgery and I don’t know all the details, but I can tell you that depending upon when you’re going to run after a surgery depends upon several things. When you can run after metatarsal fracture surgery really and truly depends on four main things. 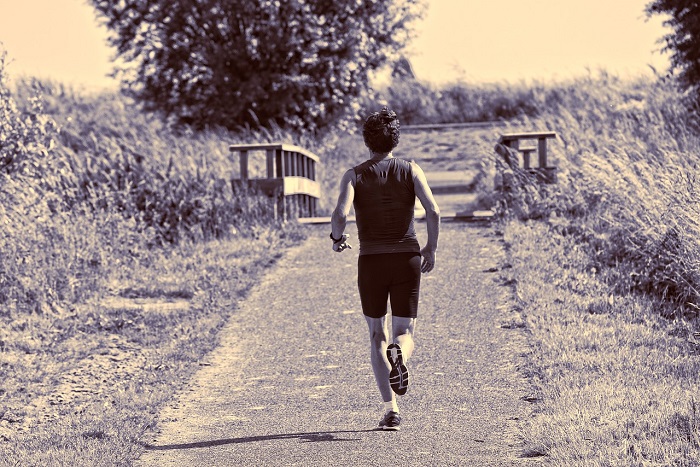 Number one, your overall health. I don’t know Jean, I’ve never seen her, I don’t know anything about her. But I do know that if she’s like most runners who is relatively young, super healthy, super fitness-minded, super health-conscious and has a good diet, really monitors her sleeps, tries to stay hydrated appropriately, is really looking for all the opportunities to maximize the healing of that tissue, well, it stands to reason that she is going to actually heal faster than someone who is an unhealthy diabetic, who has peripheral vascular disease, who has all kinds of past medical history problems that actually slowed down the healing process. That’s number one, your overall health.

Quality of the surgical repair

Number two, the quality of the surgical repair. Again, I did not do Jean’s surgery, so I cannot say how well it was put back together. Sometimes it’s very easy to put the bone right back together. You get really good apposition of bone, you get everything put just in the right place. It actually feels like it kind of clicks together and it fits like a jigsaw perfectly. That’s great. You then put screws on a plate, whatever hardware the surgeon chooses, but all that goes well. You know it’s stable. You know it’s compressing the fracture. You know it’s actually going to continue to progress because you did the best possible job at the time of surgery.

Also, a component of that is I don’t even know which kind of fracture it is, if it’s a spiral shaft fracture of the fifth metatarsal, if it’s an avulsion fracture of the fifth metatarsal where the peroneus brevis tendon actually pulled that piece of bone right off or if it’s a Jones fracture. Jones fractures are the worst. We know that they take a lot longer to heal, and they’re at a significantly higher risk of not healing if you try to move it or run on it too soon. So that’s number two, the quality of the surgical repair of the fracture.

What you do to speed up the fracture healing after surgery

This is true of racing, and I do not understand why runners will ask me these questions expecting one answer. How long does it take you to train to qualify for Boston? Well, that depends. Have you been running for a very long time and you’re already pretty close? Or have you never run before? If you’re just starting running today, it is going to take you a lot longer to qualify for Boston than somebody that’s been running their whole life. So that’s the thing is you have the same process at play when you’re recovering after surgery and you’ve had a fracture.

What I mean by that is that if you are doing nothing, except waiting for the fracture to heal, your running fitness is doing something. It’s taking a nosedive. You’re losing all of your strength, your flexibility, your neuromuscular connections, your coordination, your running form, your balance. All of those things that actually make you more efficient as a runner and able to train sooner and harder right away after your surgery, you’re losing them if you’re not doing anything to maintain your running fitness.

The fourth thing is you have to think about all of the things that you can do to preserve your running fitness that are not going to slow down the healing of that fracture. Those, of course, are things that most doctors never even mention and, truthfully, they might not just because you never even asked about it.

So remember, if you’re looking for a particular timeline on, if I had a fifth metatarsal fracture, if it was five weeks ago, if my foot still achy, how long before I can run? I have no idea unless you know all those other things. But if you think about this, you can figure out those other things. Just don’t look for one timeline. Remember, set timelines are for doctors with set schedules and couch potatoes with no schedules. Timelines are not for injured runners who want to run. You’ve got to remember that.

Now, if you enjoyed this episode, please like it, please subscribe and I’ll see you in the next training.