PRP science explained. Is there a difference between PRP injections, corticosteroid injections, and placebo? Well, that’s what we’re talking about today on the Doc On The Run Podcast.

If you’re a runner who’s had an issue with chronic plantar fasciitis or chronic Achilles tendonitis or a plantar plate sprain that just won’t get better, you might have done some research into injections and found a thing called a PRP or platelet-rich plasma injection.

The way that it’s marketed by doctors, you might think that it’s mostly unicorns and fairy dust, but there is some actual science behind platelet-rich plasma and the effect that it can have on these tendons and ligaments that aren’t healing very well. While corticosteroids have also been around for a very, very long time and have also been used as treatments for tendon and ligament sprains.

We are going to talk about this one study that looks at the science of these things. And in this series on the science of PRP injections, I’m going to try to explain what some of these studies found and what they really mean to you as a runner. Now, a study that we’re talking about today, the main author is named Shetty, S-H-E-T-T-Y. This is a study published in the Journal of Foot and Ankle Surgery in 2019. The title of the study was Platelet-Rich Plasma Has Better Long-Term Results Than Corticosteroids or Placebo for Chronic Plantar Fasciitis: Randomized Control Trial.

Now, obviously you just heard the title and you got the punchline already, but there are some specific things in this study that you might find interesting if you’re a runner. The goal of this study really was just to compare three different groups of people with these three different treatments. One being a platelet-rich plasma injection, the second one being a corticosteroid injection, and the third one being placebo.

Basically injecting something like salt water, which we know doesn’t have really a therapeutic effect, but can have what we call a placebo effect. Now, before I get into the details of the comparison of these things, I’m going to mention one thing that was really interesting. That’s that all three groups, even those in the placebo group that didn’t have an active ingredient injected into them, well, they also had improvement in all groups, so they did have some improvement in each.

Why does that matter and why am I talking about that? Well, one of the treatments that is also compared to PRP injections is dry needling, where we actually take a tiny little needle and we just poke holes in your Achilles tendon or your plantar plate or your plantar fascia in order to try to stimulate an acute healing response and get it to improve.

Some doctors have said, “Well, you’re not really putting anything in there, you’re just using a needle and it’s a sham treatment in a way, and so maybe it’s just the placebo effect.” But the point is the placebo effect actually does work many times, and so it does actually tell your brain, “You should start some healing,” and the healing began.

So when you get a PRP injection or corticosteroid injection, they have different ways of doing similar things in terms of getting it to heal, but they go about it completely differently. So how’d the study work? Well, they had 90 patients total. They followed them for a year and a half, 18 months, and they’d split them into three groups.

There are 30 people in each group. What they did was they said, “Okay, we’re going to inject you with this stuff. We’re going to follow you. We’re going to see how you do.” What they’re really looking at is in terms of how much your pain changed, how much their function changed, and their general health. Obviously, if you’re a runner and you’re not running, your health is going to decline. You’re not going to be happy, you’re not going to be as functional, but if your symptoms decrease and all those things should improve. 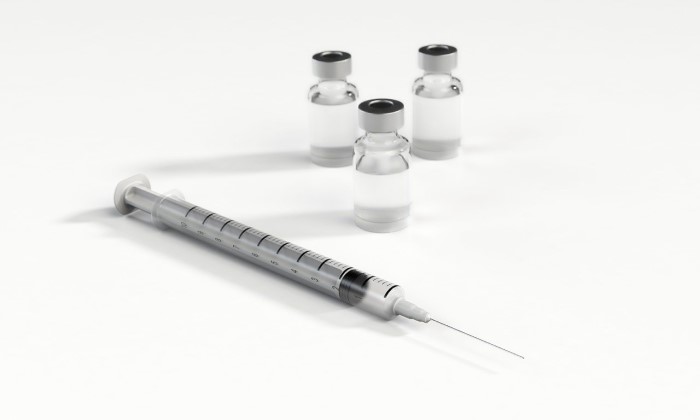 The first thing is that when they did the corticosteroid injections, they found that corticosteroids actually in the short term were better than the other two. Meaning that if you had a cortisone injection or corticosteroid injection, your symptoms would go away a lot faster. How does that work? Well, it’s a thing that we, as physicians, we call it cytokine modulation, but don’t let that term freak you out. You already know what this is even if you don’t understand the terms or the biochemistry around it.

When you take a drug called ibuprofen, do you ever take an ibuprofen? I have. In fact, I swear on every single marathon I’ve ever done, every Ironman race I have ever done, I’ve seen ibuprofen tablets on the course that somebody has dropped. So it’s very, very common. You’ll often see people carrying them. You’ll see people taking them during races.

I’m not telling you to do that. That’s not really a great idea for lots of reasons, but you understand how this works. Let’s say you do a marathon, you’re really sore the next day. Well, if you take some ibuprofen, it helps. It doesn’t help because it’s just suddenly decreased all the inflammation. If you take it periodically and consistently, yes, it will decrease your inflammation, but it also has an analgesic effect.

The way that ibuprofen works is it blocks an enzyme in the inflammatory pathway that’s called cyclooxygenase or COX-2 for short. So the COX-2 enzyme, we know that if you block that, it will decrease your pain and it will decrease inflammation. So when you have a corticosteroid injection, it decreases pain, it decreases inflammation in the same way that something like ibuprofen does. It’s just a different drug. It’s a steroidal anti-inflammatory instead of a non-steroidal anti-inflammatory, which of course is where the term NSAID comes from.

If you take a thing like chronic plantar fasciitis and you inject corticosteroids, you know that you’re going to be better sooner, at least have lower symptoms sooner than if you do something like a PRP injection. What they also found in this study though was that the study group that had PRP injections or platelet-rich plasma, they actually did better than the other two groups in the long term. Why would that be? Well, one of the key things that we’re looking for when we want to do a PRP injection on you is to actually have an increase in collagen synthesis.

Instead of just blocking inflammation and trying to squash the painful inflammatory response, we’re actually trying to get collagen to form to repair that damaged tissue. So if you have a plantar plate tear or you have an interstitial tear in your Achilles tendon, or you have a partial rupture of the plantar fascia, doing something that increases the synthesis or the repair of the collagen itself should actually make it more stable, not move as much because it’s getting stronger and stronger.

It doesn’t hurt as much when you stress it and over a long period of time, the PRP actually does a better job at actually making the real repair happen, and that’s consistent with what this study found. So there are different things in terms of how they actually work, but they do mean different things to you as a runner based on your situation. That’s why this is important to talk about.

If you’re a runner and let’s say you’ve decided you want to do the Boston Marathon, you decided when you were running cross country in high school, that was one of your lifetime dreams, but you’re not necessarily a really talented Kenyan. So even though you’re a dedicated runner, even though you can run pretty fast, it’s taken you 30 years to qualify for Boston. Well, if it does, that’s probably super important to you, and you probably want to do the race no matter what once you finally qualify for Boston.

Let’s say you’ve been training and training and training, you’ve had plantar fasciitis off and on, it gets worse. You qualify for Boston, you don’t want to give up, so you keep running on it, you make it even worse, and then you’re told you have plantar fasciosis and your doctor says, “Well, we could do a PRP injection and in the end, that will make you better, or we could do a corticosteroid injection. It might actually weaken the collagen a little bit in the long term, but in the short term, it’ll make it feel way better. Which do you want to do?” All depends on your timeline. So let’s say that the Boston Marathon is a year away. You may be better off doing a PRP injection so that it can actually become stronger, more stable, and be repaired on race day.

But let’s say that that same situation happens to you and you’re in the doctor’s office just a couple of weeks before the race. The PRP injection is not going to heal that thing in two weeks. So if you do a PRP injection, number one, we’re going to poke holes in it, which is going to weaken it and many times when you have a PRP injection, we expect that it’ll feel better initially, and then your symptoms go way up. It gets way more inflamed, it gets way more irritated, and it actually gets a bit worse before it starts to really get better.

You do not want to have it flared up on race day. So if it’s for a short term effect, like completing one of your lifetime goals like Ironman Hawaii or the Boston Marathon or the Western States 100 or something like that, well, you may be better off with a corticosteroid injection. But what’s crucial is that you talk to your doctor and explain, “Look, I want to do Boston.” And if you’re like, “You can’t do a marathon with a steroid injection, you could rupture it, but you could actually get it to repair later.” Well, maybe it’s worth that risk, but you’ve got to have an in depth discussion with your doctor so that you understand the risk and they understand what your goal really is because these things are really important.

I got pneumonia right before Ironman Hawaii. Well, it took me nine years to qualify for Ironman Hawaii. I did not want to miss my chance to go do Ironman Hawaii, so I did it with pneumonia. My doctor was not happy about that and your doctor’s not going to be happy with you wanting to run Boston if you have really chronic plantar fasciitis and you’re considering an injection, but it’s your choice, not the doctor’s choice. So I went and I did Hawaii. I survived. Was it my best race? No, but it doesn’t matter. It was one of the most memorable of my whole life.