What’s a bone bruise at an old fracture site? Is it a big problem or a little problem? Well, that’s what we’re talking about today on the Doc On The Run podcast.

When I go to medical conferences and I lecture, I often talk about stress fractures and things that we should think about as physicians that most doctors really don’t think about specifically for runners and this is a great situation here where I talked to somebody who had an old fracture where the bone was broken.

He recently had a re-injury and it’s been painful, it’s been swelling, and he’s trying to figure out what to do. Is it really critical to treat it like a fracture just because something looks funny on an X-ray or an MRI? Or do I not need to treat it that aggressively? This is a really great question. So, if you have an injury and we do something like an X-ray or an MRI to look at the bone, sometimes it’s very difficult to tell is this a really an acute injury that just happened, or is it an old injury that’s been aggravated? 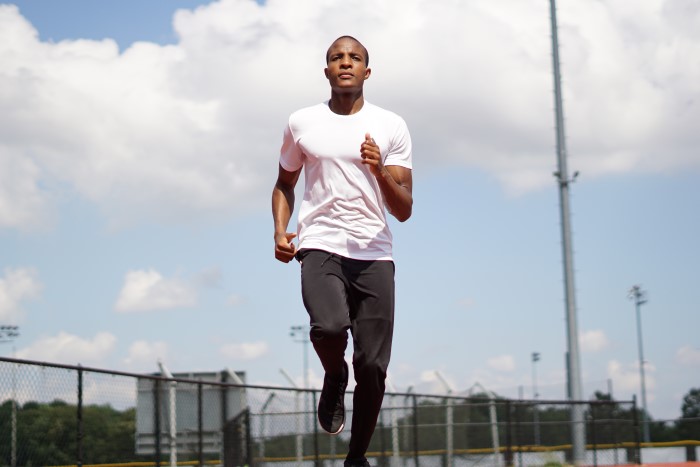 Now, if it’s fragmented, that always freaks us out as physicians because we think, wow, you just cracked it, you just crushed it, you just did something to it. But that’s not always the case. If you had an X-ray of your foot years before or months before this specific recent injury, and you can go back and look and see that, well, it was actually cracked and it looked like that before, then it might not have moved those pieces.

It might not have broken it further and it might be really not a clinical situation where you have an actual new fracture, but it’s really kind of just a stress reaction at that point. Not really a fracture at all. So, what do we mean by that? Well, when you think about this, we have a complicated grading scale for fractures. It’s complicated because it just doesn’t make sense to most people.

A Grade 1 stress fracture is where you have no pain, you have no crack visible anywhere, and you have a little bit of inflammation on something like an MRI that suggests there’s a stress fracture happening in the bone. Okay, well, there’s no pain, there’s no crack. This is a stress response. It’s a thing that’s happening where the bone’s got a little inflammation in it because it’s trying to actually make the bone stronger after you train. That’s it. It’s not something that needs to modify your activity.

A Grade 2 stress fracture is where you actually have pain, so it hurts. It’s pathologic because it hurts, and you have inflammation that shows up on an MRI, but there’s still no crack. So if you have an old fracture where the crack hasn’t changed, it hasn’t moved, it hasn’t looked any different, but it just has a little inflammation on the MRI, it’s really a stress response. It’s not really a stress fracture. So in that respect, it’s probably going to calm down faster than if you had an actual new fracture and so you don’t have to worry about it quite as much.

But as always, follow your doctor’s advice, do whatever they say. But then it should alleviate some of your concerns if the doctor says, “Look, it’s really a bone bruise.” And in my mind a bone bruise is really a Grade 2 stress fracture or what we call a stress reaction. It’s not normal. It hurts. It looks a little funny on an MRI, but there’s no new crack and that should actually recover and get better a whole lot faster while you maintain your running fitness by doing some creative things to take the stress off that particular bone.

Now, if you enjoyed this episode, please like it, please share it, please subscribe and if you haven’t checked it out yet, you might check out the Stress Fracture Masterclass for Runners. You can get it at docontherun.com/stressfracturemasterclass. It’s free. I’ll see you in the training.