Today on the Doc On The Run podcast, we’re talking about which running shoes show running form wear patterns best.

Today’s episode actually comes from one of the Monday, Wednesday, Friday coaching groups where I help injured runners get back to activity by making minor adjustments in their training routine so that they can do more and get back to running faster by maintaining their running fitness as they actually recover from the injury.

Now, this question came up, this was somebody who wanted to make sure that she wasn’t going to get re-injured, and she wanted to know which running shoes she should use to reassess her pattern, and make sure that she’s working her way out of this compensation pattern, where she’s essentially limping because of this prior injury. And that’s a really useful thing to do. So, looking at the wear pattern on your shoe can give you a lot of really useful information. 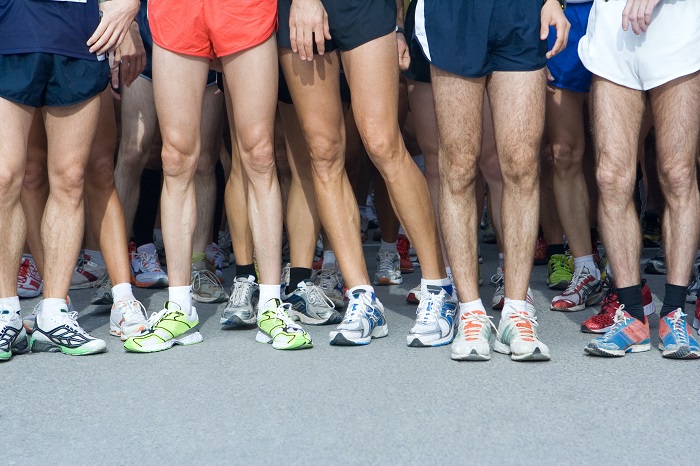 When I do house calls, I look at patients’ shoes. When I do telemedicine consults, I ask them to show me their shoes. Either take pictures of the bottom of the shoes, hold them up on webcam, whatever, so that we can assess them together and some shoes are a lot easier to assess than others for a couple of reasons.

The first thing is the material that’s made out of the sole on the bottom. A conventional running shoe like this, this is an Asics Gel-Nimbus, and it has a relatively hard material rubber that’s on the bottom that doesn’t wear very quickly. The reason for that’s really simple. You run on the road, you run on concrete, asphalt, whatever and so it needs to be more durable. It doesn’t change very, very quickly. So, it actually wears out slower than ones that are really, really soft. Other shoes like Hokas and Newtons, they have very soft material on the outside, and they wear out a lot quicker.

If you have trail running shoes, they have Lugs that will actually wear out pretty quickly on the street, but because of the way the forefoot is shaped and because of the Lugs, they sometime have additional bracing stuff that’s supposed to add more stability when you’re running on the trail.

When you run in trail shoes on the road, although the Lugs wear out pretty quickly and help you assess the running form pretty quickly, they actually do alter your form just a little bit if they have that kind of flared forefoot or medial posting or something that’s supposed to give you more stability when you’re running on dirt.

In general, I would say that it’s better if you have road running shoes, particularly those that are relatively soft outsoles. So, if you have some shoes that you know wore out really quickly, those are actually the best. Those are the ones that change quickly and allow you to make adjustments and assessments based on the wear pattern where the sole’s getting abraded off and that lets you make those adjustments a lot faster.

Otherwise, you have to do a lot of miles before you can really assess anything. But hopefully that helps you understand a little bit about which kinds of running shoes can help you assess the wear patterns associated with different running forms when you’ve had an injury, and you’re getting back to full training.