#473 Heel neuritis doctor did alcohol injection with ultrasound is it a scam? - DOC

#473 Heel neuritis doctor did alcohol injection with ultrasound is it a scam?

Today on the Doc On The Run Podcast, we’re talking about heel neuritis in a situation where a doctor did an alcohol injection with ultrasound and another doctor wanted to know if that was a scam.

This episode actually comes from a question I got during the live question and answer period at the end of a talk I was giving at the International Foot and Ankle Foundation meeting in Hawaii. This is a medical conference, it’s mostly podiatrists, sports medicine doctors, foot and ankle surgeons, they all go to get their continuing medical education credits and to get apprised of the latest techniques in foot and ankle surgery and sports medicine.

This was a question from a doctor who asked me something specific about one of the conditions that can often be misdiagnosed as plantar fasciitis, and that’s a condition called medial calcaneal neuritis, and it’s basically just irritation of a nerve that goes down the inside of the heel from your ankle down toward the heel and if the nerve gets inflamed and becomes very, very painful, it can often mimic the symptoms of plantar fasciitis. But if you have that condition and you treat it like plantar fasciitis, you are not going to get better.

So this patient had this problem where she thought she had plantar fasciitis and then she realized I guess that she had the neuritis in the heel and she saw a doctor in a different state and the doctor did alcohol injections to the nerve under ultrasound guidance and that’s where the doctor is basically injecting a solution of local anesthetic and alcohol into the nerve with the intent of basically killing off the nerve so it doesn’t cause pain anymore, and the doctor was doing it under ultrasound guidance which means that the doctor is actually using an ultrasound machine to look at the tissue, find the nerve and inject it, putting the needle right by the nerve when doing that injection. 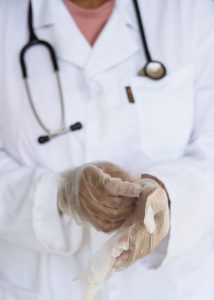 The question from the doctor in the audience was basically asking me what my opinion about that procedure was and whether or not I thought it was a scam that the doctor was using ultrasound. If you’re wondering why it might be a scam, it’s not that alcohol doesn’t work, it’s not that it can’t adequately treat runners that have this neuritis problem in their heel.

The issue is that the charge for ultrasound, the cost is actually significantly higher and the patient didn’t get better and then when moved to another state and then this doctor in the audience was treating that patient, and so that doctor wanted to know whether or not it was kind of a scam that this first doctor was doing it under ultrasound guidance and wanted to know if I did that or not.

I have the audio recording from my actual answer to that physician at the medical conference that we’re going to play for you so you can hear my opinion about that specifically. So let’s check it out.

Now the point here is that you can get treatments for lots of different reasons and one of the discussions that was going on between myself and the director of the International Foot and Ankle Foundation who has done lots of the research actually on alcohol sclerhosing injections for neuromas and nerve issues in the foot, we basically had the same opinion it turns out, and I didn’t realize that until he also gave his opinion.

I do not think that it’s necessary to do ultrasound for this particular problem because for one, the nerves and the nerve branches in that area are very, very small and I don’t really know that you can see them very easily on ultrasound, and if you use the technique that I described, it’s completely unnecessary anyway. So in my mind, it’s a big waste of money.

So it’s not that it’s really a scam in that situation, even though I personally think it might be unnecessary just from a technique and ability to perform the procedure perspective. It’s the issue where you’ve got to make sure that your insurance is going to pay for it, and some insurance companies apparently really drive those decisions in effect by saying if you don’t do it under ultrasound we’re not paying for it. But then of course the patients, when they have a high deductible, kind of get shocked by the bill when they see that it was not only a charge for evaluation, it was also a charge for the injection and a charge for ultrasound guidance of the injection as well, which can be several hundred dollars.

I don’t accept insurance for part of that reason and that’s one of the things I mentioned. I said, “I don’t take insurance. I do what I think is right for the patient. I don’t really care what insurance companies pay for or what they don’t pay for, I do what I think is best for the patient based on what me and the patient, the runner who wants to run, what we actually decide together based on the risks and benefits of those things, not what the insurance company pays for it. They’re not always on your team, so I don’t include them in that discussion.”

But hopefully that helps you understand a little bit more about alcohol sclerhosing injections, specifically when you think you might have heel pain that seemed like plantar fasciitis and then it might be something else, you’ve got to make sure you’ve got the right diagnosis.

That’s one of the things you really want to think about and one of the things you might want to check out is something I made for you that explains really the two main reasons runners don’t get better when they think they have plantar fasciitis and they’re doing all the right stuff but they’re just not getting better. So you can get that at the bottom of the show notes for this particular episode at docontherun.com under the podcasts tab.

If you’re a runner with heel pain I have made something for you need to check out:  learn… “Why some runners don’t get better!” 2 Reasons Plantar Fasciitis Isn’t Healing! You can watch it for free here: