Today on the Doc On The Run Podcast, we’re talking about three foot types that are prone to extensor tenosynovitis.

Extensor tenosynovitis is one of these things that doctors don’t often talk about because it’s a relatively rare condition. If you go to most podiatrists websites, you’ll usually find things about plantar fasciitis and shin splints and some more common things like that, but extensor tenosynovitis is one of the things that can affect runners and it can be really painful and oftentimes it’s actually misdiagnosed either by doctors or by the runners themselves as a stress fracture. A lot of times, it kind of forces you to take time off of running unnecessarily.

If you squeeze and compress those extensor tendons and the tendon sheath around them, well they can become inflamed, you get inflammation in the sheath and then it really hurts a lot. I’ve had that myself and it is painful. I can tell you for sure, but there are three kinds of people that seem to get this more than others for a couple of really specific reasons that we’re going to talk about. 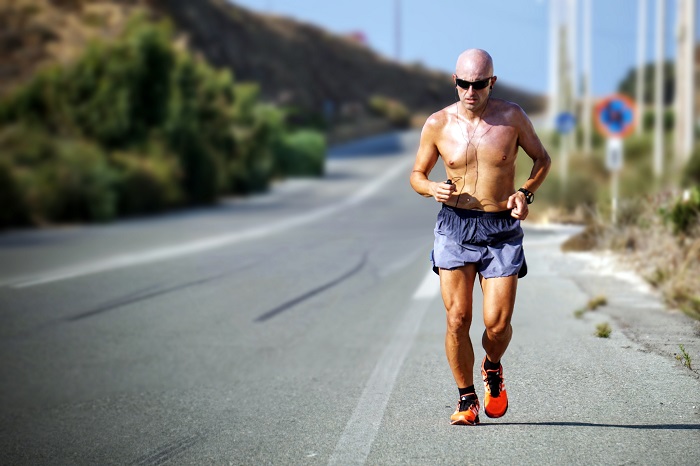 The first kind of foot type that is really prone to getting extensor tenosynovitis is somebody that has high arches. Doctors refer to somebody with high arches as having a cavus foot type and one of the doctors in one of my biomechanics classes in med school said, it’s really simple. If you look at the side of their foot and you see that big arch, well, it’s an arch like a cave. It looks like a little cave that you could crawl in there and that’s how you remember cavus foot.

Well, when you have really high arches like that, it makes a spot on the top of your foot where the bones kind of stick up more and then it’s actually more sort of pointy and it actually compresses those tendons against the inside of your shoe right underneath the tongue where the shoelaces are. And so, you have high arches. First of all, that’s the main thing that really predisposes you to getting extensor tenosynovitis from running.

The second thing is if you’re really skinny, so not just your whole body, more specifically your feet. If your feet are really, really thin and you have less subcutaneous fat, then it’s going to be easier to compress those tendons. Now, when you take up a training program and you start doing Ironman Triathlons or training for marathons, and you start to lose a lot of weight, you notice that you have a lot more veins noticeable in your legs. And it’s not that you really got stronger overnight and developed so much musculature that you had to have more veins, it’s that the subcutaneous fat has actually gone down so much and you’ve gotten so much thinner that you can see all of those veins.

Of course, it makes you look very, very fit, but it’s really a sign that you have really low body fat. And when you have low body fat on the top of your foot, then that’s the cushioning that really protects those tendon sheaths from getting inflamed. And so, when your shoe is pushing downward, because you tighten your laces and the bones are pushing upward and you don’t have much fat to cushion those tendon sheaths, you’re more prone to getting tenosynovitis.

The main reason people get extensor tenosynovitis is because their foot type is in the shoe and the way that you lace the laces actually applies a little too much compression on the top of the foot and squeezes those tendon sheaths, and it really aggravates and irritates those tendons and can cause a lot of pain and discomfort.

If you think of pain on the top of your foot and you think you have a stress fracture, but you have really high arches, you have really low body fat and you have narrow feet, you might want to really look into those a little bit more and see if it might be extensor tenosynovitis that’s really causing your problem.