Today on the Doc On The Run Podcast, we’re talking about muscle atrophy, and whether or not it’s reversible.

When I lecture on running injuries at medical conferences, in all the talks that I do about different specific injuries like tendinitis or stress fractures or whatever, I have a slide in there that talks about the catastrophic effects to runners, when we, as physicians, give you fracture walking boots for long periods of time, like four weeks or six weeks.

One statistic that was published in a medical journal that I present to doctors at those conferences, is I say, “Look, it’s not my opinion. These are the numbers. When you put a patient in a fracture walking boot or a cast, and you put them on crutches for one week, just a week, they get a 17% reduction in the muscle diameter size on that lower extremity.” Now, you think 17% is not a lot, not a big deal, right? Well, it gets worse. At four weeks, you actually have a 60% reduction. And when you go eight weeks, 10 weeks or 12 weeks, that atrophy can become permanent and it’s not something you can rebuild. 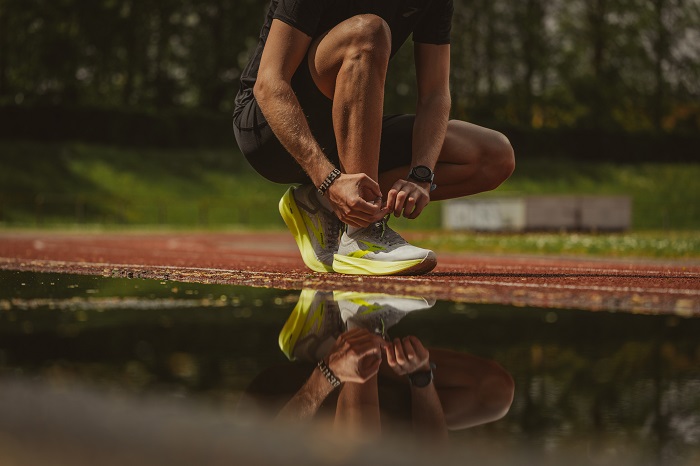 The reason I know that, is I have a friend that I met in 1994, who got a blood clot in his leg while he was climbing. He did Ironman triathlons. He doesn’t do them anymore because he can’t. And his calf is about a third smaller than the other calf, 20 years later. And I saw a patient, who I use an example in the talk to doctors, I have a picture of her in there and she was in a cast and then she was in a boot, and then she was kind of in and out of boot for a while, but long story short, it was 12 weeks total.

The picture I have that I showed the doctors, she’s standing on her toes in her kitchen and her calf on one side is about 30% smaller than the other calf. And I’ll always ask the doctors, “When do you think I took this picture?” and  they say, “Well, probably, at her first follow-up after she came out the boot?” I said, “No. This is five years later.”

We know for a fact now, this is somebody who was very athletic, who continue to run and train and do triathlons and marathons and has permanent atrophy. I don’t know what the cutoff date is. I don’t know, but I know that it’s somewhere after four weeks and it’s certainly by 12 weeks. But if you’re immobilized in a fracture walking boot for too long, the atrophy or the sort of wasting away of the muscle is progressive, and it becomes more and more intractable, and effectively becomes permanent.

If your doctor puts you in a fracture walking boot, it’s not that you don’t need it, you probably do. The question is, how long? And what you really have to press the doctor on is how long. You also need more frequent follow-up. If they give you a boot and say, “Come back in a month,” you should say, “How about if we check it in two weeks instead, would that be all right?” And then go in and ask question and tell them, “Look. My pain went away completely at five days of using the boot. Why do I have to wear it for a whole another three weeks?”

You really have to think about, for a second, that you’ve got to be your own advocate when you go to the doctor, because you do not want permanent atrophy, you’re not going to get it back.

I saw a guy one time who was a CrossFit instructor and a runner, he trained athletes, and he asked me about the fracture walking boot. A doctor  had suggested he use it and I told him that same thing. I said, “Look. At one week, you get a 17% reduction, the muscle diameter size.” And he was like, “Well, that’s not that big of a deal.” I said, “Is it really? Is that not a big deal? Let me ask you a question. What if we flip it around and pretend I’m a 30-year old woman who came to you and said, ‘I’d like to train with you. I have really skinny legs. And I’d like stronger looking, more muscular calves. How long would it take you of working out with me to get my calf muscle 17% bigger?’ ” And he was like, “That’d probably take a while.” I said, “Right, a lot longer than a week.” And I said, “How long would it take to get it back if you lost 60%?” and he laughed out loud, he was like, “Never,” I’m like, “Right. That would be difficult.”

You really have to think about how important it is that you maintain your running fitness, you maintain your muscle strength. And you’ve got to do that with some movements and flexibility and some exercises that you’ve got to make sure to get approved by your doctor, or that you’re sure from what you’re doing and the way you’re testing it, that you know that it’s okay for you.